Are You Poor and Don't Know It? 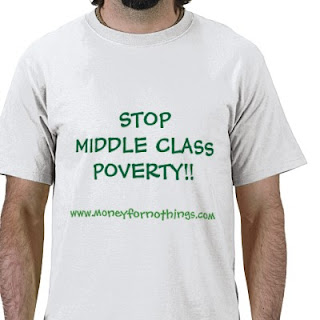 Are you poor and just don't know it?  A lot of Americans are!

In a recent online article about retirement planning and "how to make your nest egg last", there was a comments section and one wag posted the comment, "Well, I'm married and have three kids and don't have a nest egg.  We are living from paycheck-to-paycheck.  I'll just have to worry about that later!"

The remainder of the "comments" were equally as illuminating - how saving is for chumps, and you might as well not bother because it is all a con-game anyway, right?  People actually think like that.

What struck me as odd about that comment was a number of things:

1.  To have no savings is sad.  But I suspect this fellow has Cable TV and a cell phone.  Most Americans do.

2.  The "living paycheck-to-paycheck" thing is getting old.   It seems to be the battle cry of the middle class - as if someone else forced this upon them.

3.  Saying "I'll worry about that later" is idiotic.  When later comes, you will have no savings to worry about, but live in dire poverty on Social Security - and whose fault is that?  A small amount set aside NOW will add up to a LOT later on.

But of course, I am talking to a rock here.  The fellow is put-upon by the world and that is that.   What with car payments and the cell plan and the cable bill, he is living "paycheck to paycheck" and that is all there is to it.   He can't put away, say, $5 a day toward retirement - but he can wait five minutes with the engine idling in his SUV at McDonald's getting his $6.75 "value meal" - right?

And then it dawned on me - this guy is poor, by any real definition of the term.   He just doesn't know it.   But if you asked him, he would claim he was "middle class" (a term we all embrace as it sounds so egalitarian).

And the government aids and abets us in this type of thinking - using cash flow instead of net worth to determine who is poor and who is not.   The government's definition of poverty - the so-called "poverty line" is based on annual income not on overall wealth.

So, the fellow living "paycheck to paycheck" making $50,000 a year might rightly feel that he is "middle class" by the definition of the government - after all, his income is nearly twice that of the "poverty line" - right?

But, as he admits, they have no savings whatsoever, and nothing to fall back on, other than the almighty paycheck.

In other words, he is flat broke.   His net worth is zero, or perhaps even negative.  To me, that is the definition of poverty, plain and simple.   This fellow spends every penny he makes and thinks nothing of it.   After all, everyone buys a designer coffee drink on the way to work, right?  It's just five bucks a day, and that isn't a lot of money.  But over 30 years, that is $184,458.30 invested a 7%.

And people from all levels of society are poor and fail to realize it.   I recounted the other day I met a fellow who came from a rich family in Atlanta.   He is driving a BMW, flying in his father's private airplane, staying in his parent's seaside home on an exclusive gated island community of multi-million dollar homes.  He takes fabulous trips abroad.  He wears designer clothes and has, of course, the smart phone.  We works in his father's business making a six-figure salary.

But he confesses to me that, despite his lavish lifestyle, he is flat broke.   Not a penny.  Nothing.  Nada.  Not even in his retirement plan.  He has to hope that Dad will leave him some money in his will, and that he won't piss off Dad between now and when Dad dies.   But the joke is, of course, that Dad is highly leveraged and in fact, close to insolvent, as the multi-million dollar home is not worth what they owe on it, and the airplane and their cars are all "upside down" and there might not be an inheritance - at all - if the business doesn't do well.

In other words, he is poor.

And a lot of us are this way - or were.   I know that as a salary slave, I thought nothing of how I spent money - only that I was making "a lot" or so I thought.  So buying a $5 cup of coffee or having a $15 lunch was no big deal.   After all, we were "rich" - or at least comfortable middle-class - and could afford such things.   The creeping credit card debt, the lack of any real savings, the increasing debt load over time - those were not real concerns.   All that mattered was income and spending.

And of course, I was wrong, and figured this out before (hopefully) it was too late.

Since then, we've adopted the "post-career lifestyle" in that we make a lot less money these days - and spend hardly anything.  And when we do spend, it has to be cash, period.    Putting things on credit cards with the idea of "paying it off later" just isn't in the cards.  Our incomes are down, but our net worth is up.  We are not living "paycheck to paycheck" but make less money that most who do.

What changed?  Well, we realized we were poor.  Not starving-to-death poor (no one is that poor in this country, period) but poor in terms of real wealth.   And with that realization came the secondary realization that loading up our lives with expenses, in the form of subscription services, fast food, designer coffees, electronic gadgets, cars, and other junk was, well, making us poor.

We had traded real wealth for the appearance of wealth.   And most Americans do this - and then whine about living "paycheck to paycheck" - usually texting this to you from their smart phones.

So, how do you get out from under this poverty mindset?  By realizing you are poorer than you think, despite your nice house, fancy car, and all the other gadgets and crap.   By realizing that, no, you (or your kids) don't "need" a smart phone, but your 401(k) needs $100 a month more in funding.   That you simply can't impulse-purchase stuff because you want to and the amounts involved are small.

And this is a staggeringly difficult thing to do, as likely your peer group will pressure you to spend.  "Hey, let's get a Starbucks!" your friend says - the friend that goes there every day and thinks nothing of it.   And you can't say, "No, I can't afford it" even though that is really the truth for 90% of us - no one can "afford" a $5 cup of coffee.   But your friend would think you were weird for saying that - and even argue with you.  "Come on, it's just $5, it won't break the bank!"

But it will, over time.  Just as Cable TV bills, Cell phone bills, car leasing bills, and all the other things people think are "necessary" to modern living will, over time, make you poor, not by taking away from your net worth, but by preventing you from even establishing one.
Newer Post Older Post Home