Stock Picking - Would You Have Invested? 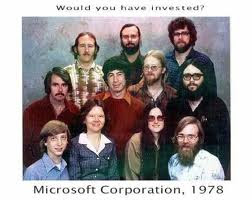 The mythology of Microsoft is worth examining in detail, as it illustrates the fallacy of stock-picking.  The above photo, which is circulated a lot on the Internet, is often used as a way of saying, "Gee, you never know where the next big thing will be coming from!"

And the implication is, that a few very far-sighted individuals were able to spot this early on, and knew that Microsoft's grand designs for operating systems and Windows would eventually lead to their dominance in the marketplace.

Nice theory.  But it is utter bullshit.   Microsoft had no grand vision for the future - it fell ass-backwards into its best deals - DOS and Windows - and became the powerhouse it is today based more on sharp business practice than anything else.

If you went to the Microsoft offices back in 1978, they did not have any operating system to sell you.   Their main product was a BASIC compiler for the popular hobby computer, the Altair 880.  It was not until the IBM PC was developed, that the company took off, and even then, by freak accident.   The business was thrown in their lap due to poor judgement by Gary Kildall, of Digital Research:

Microsoft entered the OS business in 1980 with its own version of Unix, called Xenix.[11] However, it was MS-DOS that solidified the company's dominance. After negotiations with Digital Research failed, IBM awarded a contract to Microsoft in November 1980 to provide a version of the CP/M OS, which was set to be used in the upcoming IBM Personal Computer (IBM PC).[12] For this deal, Microsoft purchased a CP/M clone called 86-DOS from Seattle Computer Products, branding it as MS-DOS, which IBM rebranded to PC-DOS. Following the release of the IBM PC in August 1981, Microsoft retained ownership of MS-DOS. Since IBM copyrighted the IBM PC BIOS, other companies had to reverse engineer it in order for non-IBM hardware to run as IBM PC compatibles, but no such restriction applied to the operating systems. Due to various factors, such as MS-DOS's available software selection, Microsoft eventually became the leading PC operating systems vendor

Kildall's error was the first piece of luck they had.   And luck was what it was.   Never confuse being lucky with being brilliant.   Although most lucky people are convinced they are brilliant, in retrospect.

The second piece of luck might have actually not been luck.  Whoever negotiated the license with IBM, decided to keep the valuable "back door" licensing rights for third party computers.   As a result, once the IBM PC became a de-facto industry standard (sending a host of computers, from the Apple II, to the CP/M, to various home and hobby computers, to the trash heap), Microsoft was the only place in town to buy an O/S.

The point is - and this is the point - trying to spot "tech trends" and stock-pick winners and losers, is nearly impossible to do.   There was no way you could have predicted the chain of events that occurred in 1980, that basically fell into Microsoft's lap. Not without a time machine, anyway.  And time machines are in short supply.

So what about Windows?  Surely this had to be the result of some grand vision of Bill Gates and Microsoft, right?  Well, not exactly.  Both Apple and Microsoft realized that the future of the computer lay in something called the Graphical User Interface - an invention of the Xerox Palo Alto Research Center (Xerox PARC).   It was an invention Xerox developed, and then discarded - making it freely available to both Bill Gates and Steve Jobs.

Apple came out with the Macintosh computer, an odd-shaped one-piece thing with a tiny monochrome screen that was touted more as a student computer than a serious business machine.  Microsoft released its horrible first version of Windows, which was more of a shell program that ran on DOS than an Operating System in and of itself.

But, over time, since the IBM PC architecture (now an industry standard, developing from the XT to the AT) was so ingrained in the installed base, eventually, as people upgraded machines, they migrated to Windows, even if hard-core typists complained that the mouse was a distraction, and their well-honed and developed programs and macros no longer worked.

And at that time, another piece of luck landed in Microsoft's lap.   The makers of WordPerfect, who had over 70% of the word processing market, decided to launch two horrible releases, back-to-back.   Their new version of WP for DOS, 6.0, altered the location of all the "Function Keys" (Those keys at the top of your keyboard that we used in the DOS days, that many kids today wonder about).   This meant that all your macros and shortcuts, as well as your typing instincts, became obsolete overnight.   Word Perfect's Windows version was not much better, and did not provide an easy migration path for users from the DOS version.

At that point, it became easier to just migrate to MS-WORD.   And it didn't hurt that many early version of WINDOWS came bundled with free copies of WORD.

Microsoft, since then, has tried to use market share and sharp practice to get ahead - and at times, it has worked, at other times, not.  Windows remains the default operating system, taking on Linux, Chrome, cloud computing, whatever.  But whether it will remain in power, remains to be seen.  IBM was once thought invincible - and ironically, its penultimate product - the IBM-PC was its downfall.  IBM, once the world's largest computer maker, no longer makes computers.

Some Microsoft ventures have floundered.  In fact, nearly everything not related to their core business of Windows has been a flop.   Remember, it was Bill Gates who once said, prior to 1995, that the Internet was a fad.  Some vision! (UPDATE:  Some have noted that Gates' biography was edited and re-released, to delete his comments that the Internet was a fad, and replace them with his far-ranging vision of the Internet as the future.  Billionaires can literally rewrite history!).

Netscape Navigator dominated the web browser market, until Microsoft offered Internet Explorer for free with Windows.   Later versions of Windows basically embedded IE into the OS.   And there was an anti-trust lawsuit about this at the time.  Microsoft won, Netscape, once the dominant player, is history.  Of course, today, so is Internet Explorer.  Chrome is taking over - and Android may supplant Windows, or at least put a dent in their business, in the future.

Did Microsoft have great technology? Or just sharp business practice?   Well, functionally, there was little difference between Explorer and Netscape, other than Explorer was FREE, which put Netscape out of the running, in a real hurry.  Score, Microsoft 1, but not on technical merits.

While Apple dominated the music market with the iPod, the Microsoft "Zune" turned into an awkward embarrassment.   Microsoft wanted to control users by forcing them to "rent" music, which turned off most people who wanted to download the music they OWNED on CDs to their iPods.  And as it was late to market, an industry of iPod accessories sprung up, all keyed to the ubiquitous (and proprietary) iPod interface.

(UPDATE:  Years later, MP3, which was a shitty format to begin with, is dying out, supplanted by more accurate digital renderings.  As bandwidth has increased, there is less and less need to use MP3, and it is a lot easier to just burn a memory stick or SDRAM with high-res audio and run it in your car or smart phone.  The iPod, once the go-to Apple product, is officially dead).

Microsoft loses money on every Xbox sold, and missed the boat when come-from-behind contender Nintendo blew both them and Playstation out of the water with a low-tech gaming station that had crummier graphics, but a better user interface - the Wii.  But in the gaming world, you are only as good as this year's console or the latest release of the hot new game.

Again, Christmas 2006, would you have predicted the success of the Wii?  I remember vividly at the time, all the journalists and prognosticators writing the obituary on Nintendo as a company. Surely, they were out of the running, as their graphics were not up to par with the Xbox and the Playstation!

That would have been a tough call, stock-picking wise.  And it illustrates how the "experts" giving investment advice can be so, so wrong.  Remember, these same "experts" said Enron was a great investment, too!

The list goes on.   Perhaps it is too early to write the obituary on the Windows Phone (UPDATE: No, it wasn't - but again, predictions...).   But with the Android taking up 50% of the market, and the iPhone taking 30%, it seems that Microsoft has once again entered a non-core business too little, too late, after everyone else is already well established.

So, what is the point of this?  Well, not to bash Microsoft.  They are the General Motors of operating systems, and that is not a compliment. GM makes committee-designed cars, using a bloated management that is top-heavy with Vice Presidents.  Too many meetings, too many supervisors, too many compromises in design.  The result is a product that, while popular, is hardly considered to be the best in the marketplace.

The point is, picking tech trends, early on, is nearly impossible to do.  Yes, maybe buying Microsoft once it was established with DOS was an obvious play.  But in the pre-IBM PC era, no one could have foreseen how things would play out.  And the various utter failures in the marketplace illustrate that Microsoft has no real genius or vision for the future - any more than anyone else - and that their continued success is really more of a function of monopoly practices than anything else.

When forced to compete on the product merits  - such as in gaming stations, MP3 players, cell phone operating systems, and the like, they fail. When they can bundle their product with the Operating System - which they did with WORD and EXPLORER, they can dominate the market, as no one will pay extra for a competing product when the MS version is essentially FREE.

Today, we are in another "dot com" bubble, and breathless business reporters are saying that they can pick the winners for the next decade.   We are told that Apple can do no wrong (even though their history shows one miss-step after another) and that Google will take over the world.   And now, of course, next month, is your "opportunity" to buy into Facebook, which like Microsoft, sort of fell into success without really realizing how they could monetize from it.

Picking winners is risky.  It is gambling, like a the horse races, or at a Casino.   As a result, investments in these kind of stocks is not for the faint of heart.    You pick the wrong horse, and you could lose it all.   You pick the right one, you might become moderately wealthy.

Well, yea, but then again, that is just barely enough to retire on.   And then again, would you have thrown a hundred grand at Apple back in 2009?   Come to think of it, would you have had $100,000 to invest in 2009?  Probably not.  And if you are a middle-class American, investing that much in a single stock would likely make you wet your pants with anxiety.

But that illustrates the point - you can't know ahead of time which will be winners and which losers, and I got lucky with AVIS - not brilliant.

And what all of us small investors do, is not put $100,000 in Apple or Avis, but rather gamble smaller sums - sums we feel comfortable losing.   And we lose, most of the time, and as a result, our overall portfolio suffers.

For every small-time Joe who puts $5,000 into the Facebook IPO, some insider is cashing out by the same amount.  The deal is, there are only a few hundred or few thousand insiders, while there are hundreds of millions of us chumps.   Do the math - they become Billionaires, on your dollar.
Newer Post Older Post Home