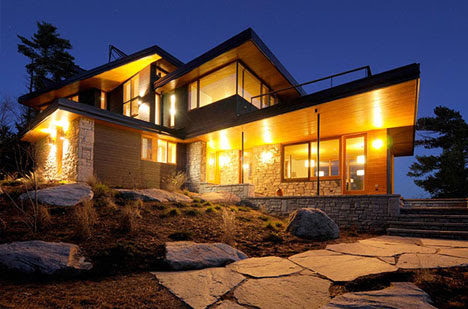 A dream house can turn into a nightmare.  Possessions are less important than people and ideas.
When I was about 8 years old, my parents had to move.   My Dad lost his job (again) and after some searching, found a job as a manager of a failing car parts factory in Syracuse, New York.  The business was small, and faced a lot of competition from larger US competitors.  Overseas competition was just on the horizon.  They were locked in with stultifying union contracts, obsolete WW-II era equipment, and a cost basis that was staggering.

It was a classic case of a business that was a zombie - the walking dead.   It would take another 25 years for the company to finally fold.  It was bulldozed to the ground and is now an "Art Park" - which was cheaper than making it a HazMat cleanup site.

But in 1968, that was all many years in the future.  And the prospect of moving was, to a kid, exciting, even though you would miss all your friends.

Originally, my parents looked at an old farmhouse, built in the Italianate style of the late 1800's.  It came with a huge barn and 100 acres of land.  It was an antique house, that even had an organ built-in to the parlor.  It was all set to be a done deal, and the idea of being a country farm kid seemed kind of interesting.

But when we finally moved there, my parents had changed their mind.  They decided to buy a Japanese-modern style house on a lake, that sort of looked like the house shown above.  Pretty far-out!   It looked like something Frank Lloyd Wright might have designed, and more importantly, it was across the lake from my Dad's boss's summer home.  The location was far better for networking and socializing with the proper set for that area.

It was a beautiful home, and the previous owners, who built it, spent a lot of money designing it.  It was unique, to say the least, and was in a very private location overlooking a pristine lake.  What a great place to be a kid - at least in theory.

Why the folks who built it ended up selling it, is an interesting story.  I can only speculate that the cost of building it and owning it was too much for them - as well as the cost of maintaining two homes, as they owned a large estate nearby.  For whatever reason, they decided to sell it.  Perhaps that should have been a warning right there.

It was the nicest house my parents owned - ever or since.  And it probably was a stretch for them, even on an executive's salary.  I recall it cost $100,000, which back in 1968, was a staggering sum of money - about five times the national average.  It would be like owning a million-dollar home today.  So perhaps it was a bit of financial stress for my parents to buy.

Still, though, to have such a home - and on a lake!  What a way to live!  It would surely make anyone happy, right?

You would think that, and you would be wrong.  Having things is nice and all, but hardly an end in and of themselves.  To someone without "things" it would seem that having money, cars, houses, and "stuff" would make you happy, happy, happy.  But in reality, it does not.

This is not to say that owning things makes you miserable.  Not at all.   You can be miserable in a mansion or in a hovel.  You can be miserable with a Billion dollars, or just one dollar.  Happiness is really independent of money.  Happiness is more dependent on other things.  And if you are unhappy, having a lot of money and being unhappy is really not an answer, and often can lead to greater unhappiness.

After all, with all that money, you should be happy!  At least, if you are poor, you can blame your unhappiness on poverty.  If you are rich and unhappy, it seems you have no excuse.

And in America, of course, we are all rich, by global standards.  But we refuse to believe it or conceive it.  A person living on welfare in the US, below the poverty line, is in the top 90% of income for the planet.  People in other parts of the world would kill to live as a "poor" person in the US.  And I suspect, if they could make it over here, they would not be "poor" for long.

And of course, when they do, they aren't.  Which is why "Americans" hate immigrants.  Immigrants are constantly showing us up to be the lazy, self-pitying, no-good slackers that we are.  So we make up stories about how they are getting some kind of special deal, paid for with our tax dollars, of course, when in fact, they are just succeeding by trying, and we are too depressed to even try.

That illustrates the cooking-a-frog concept of life, though.  You get into hot water and  it feels hot and you'd jump out.  But if you raise the water temperature slowly, you get used to it.   And humans can get used to all sorts of realities, over time.  What seems shocking in the abstract, seems the norm, over time.

So the "dream house" we moved into filled us with awe.  Until about a month later, at which point, we took it for granted.  It was only when friends came to visit that I would realize I lived in an unusual home.  Most people in the area lived in homes that looked like a child's drawing of a home - peaked roof, four windows, and a chimney.  Few folks had walk-in fireplaces dominating their living rooms.

But the dream home turned to haunted mansion in short order.  Why?  Because we were not happy as a family in the house, and I think in part this was due to the financial stress on my Dad of owning the place.  I think, too, that when you live in a spectacular place, you think, "I should be happy all the time" and when your life doesn't live up to the expectations set by the house, well, a cognative dissonance sets in,

I often wonder how my life would have been different if my parents had bought that farmhouse instead of the dream house.   Would my parents have spent so much time trying to get in with the cocktail circuit and the upper crust?   Would my friends have been country farm boys instead of depressed drug-abusing preppies?

It is hard to say.  But I can say that my memories of that beautiful house are not beautiful memories.  It was, after all, just a place to live, like any other house.  And how happy you are in any house is not a function of how nice the house is - but how nice the people are inside.
Newer Post Older Post Home