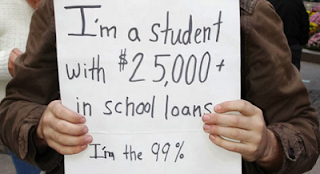 A lot of folks are protesting student loan debt, and I have written about this before, several times:

But let's get down to brass tacks here.   Is the guy in the picture above, hopelessly in debt?  I borrowed close to $40,000, over two decades ago, and managed to pay it back.

That amount of money seems like a lot to a kid, because they have none.  And when I was that age, I had nothing - just debt.   And when I calculated my net worth, it was scary.

But expected.   You don't start out in life as a Millionaire.  You have to work your way there.   And at age 22, life might seem to suck, compared to your college years (when you could spend all that loan money and live high off the hog).  But over time, trust me when I say, that in 10 years you will laugh at how trivial an amount that was.

Now, granted, there are some people getting professional degrees who are running up hundreds of thousands of dollars in debt - but most of those folks will make huge sums of money to pay it back, too.

And you can minimize the amount you borrow.   I saw, firsthand, in college, how some folks lived a pretty sweet lifestyle, by borrowing more than they needed to.  You can minimize expenses, you can work part-time to make more money.  You can go to a cheaper school.

Or, you can smoke pot, get a tattoo, and complain about how the world is a harsh, unfair place.

But it really isn't.  At least not in this country.   If you try, even a little.
Newer Post Older Post Home