All You Can Eat (AYCE) 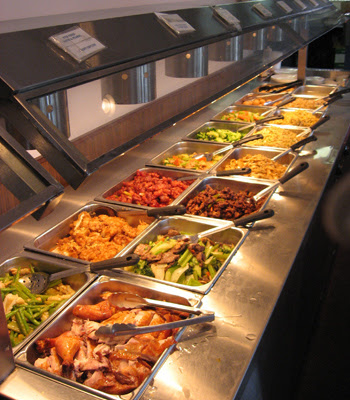 Just Say NO to the All You Can Eat Buffet!
NOTE:  This is a cross-posting from my Losing Weight Now! Blog from February 2010.  In response to my last posting about navigating the restaurant menu, I anticipate that some fatties might argue that the "AYCE" is a good bargain - as you can stuff yourself like a hog for the low, low price of $11.99 or whatever.

But stuffing yourself like a hog is not cost-effective in the long run, as it destroys your health, which is expensive - very expensive - not to mention uncomfortable and gross.

Restaurants that rely on buffets are not really restaurants at all.  They are just food bins for the hogs at the trough.   And yes, they make money by using less wait staff and filling up the "endless buffet" line with cheap starches.

Even at their "low, low price" you can make several meals at home, for the same money, and eat healthier.   And as I noted in my previous posting, going to a restaurant should be a fun experience not an attempt to "get your money's worth" by fighting the other piggies in the buffet line.

Buffets are not restaurants.  They are barely eating.  They are just refueling stations.  Life - and food - is so much more than that.  And the point of this blog is how to live better on less, not how to wallow in gross excess on a budget.   America has far too much of the latter, it seems.

Why? Well to begin with, they are gross. There is a reason they have something called a "sneeze guard" above the food (hopefully).  Eating from a trough that any number of unwashed patrons have dug into is just disgusting, period, and you are very likely to catch some sort of illness from such eating habits. At least with a traditional kitchen and waiter, there are a minimal number of people potentially handling your food, and they are trained in food handling (except the fast-food places that hire teenagers - avoid those, too).

Second, the foods they generally offer are bad and bad for you.  These buffet places operate on the "most calories for least price" theory, so they try to load up on cheap carbs as much as possible. Many items are loaded with fat and salt (like most restaurants).

And very rarely are such buffets known for quality, gourmet foods.  Most of the fare is rather bland and inoffensive, as it is targeted toward the great unwashed masses.  So don't expect food with any flavors. Nothing spicy, nothing with garlic, nothing that might offend Thelma from the trailer park, who likes her meals starchy and bland.  You want to eat that sort of shit?  Knock yourself out.  But don't kid yourself that it is good food.

For example, a friend of mine took me to her favorite AYCE seafood buffet house.   It had seating for over 500 tables and a roped-off line in the front like a ride at Disney world.   The giant buffet was continually filled with buckets from the kitchen as the ravening hoards stripped it clean.  That is, except for the seafood.   Items like shrimp and crab were only restocked occasionally, which lead to a rush to the buffet whenever the busboy came out with a new load.  Hardly an enjoyable dining experience.  More like chumming for Shark.

Worse yet, the shrimp and crab were frozen and overcooked.  Frozen seafood, less than a mile from the ocean!  What gives?  The worst insult to the culinary palate was the butter they served with the crab - well, not butter, fake butter.  In fact, there was fake butter on nearly everything there.

And unfortunately, buffets are all just about like this.  Discerning diners are not interested in stuffing themselves with as much food as possible . They want quality food at a fairly reasonable price.  Quantity should be secondary to quality.  And for a restaurant to make money on the AYCE principle, they have to cut corners.  And since they are serving huge crowds of people, the food has to be bland and inoffensive.  Don't expect any interesting sauces or spices at the AYCE buffet.

Chinese buffets merit special mention as the foods can be very high in calories and include a lot of fried food.  Sugar and sodium content can be through the roof as well.  Stir-fried vegetables may sound healthy, but they are fried in oil, which negates a lot of the benefits of the vegetables.

But all that aside, the best reason not to go to the buffet is portion control, or the lack thereof.  Since servings are not portion-controlled, it is hard to put food on your plate in a manner that is rational and reasonable.   You may start off with good intentions, but since most buffets are "groaning boards" of a wide variety of foods, it is hard not to come back with a plate piled high with stuff.   As you work your way down the buffet, you think, "Gee, that looks good, too!" and pretty soon, you have a mound of food the size of your head.

And the problem is, you are trying to portion control at the time when you are most hungry.  As a result, you tend to over-portion and then end up over-eating.

And if you are with friends, chances are, they will take a second or even third trip to the buffet, which will encourage you to do so as well (or sit there awkwardly while they eat, which is never fun).

But again, the point of this blog is to be realistic about eating and in the real world, you may find yourself in a buffet situation.  And you may have a favorite restaurant that has a good buffet (such as a brunch buffet).  Do not seek out the AYCE, but if you have to go, make it an occasional or special occasion, and use some tricks to prevent yourself from overeating.

Buffets and AYCE restaurants should be avoided whenever possible.  Do not seek out such restaurants and don't look at a restaurant meal in terms of calories per dollar.  The very nature of the AYCE buffet encourages you to get the best "bargain"possible by overeating (and thereby getting more for your money).

Of course, only in America could this happen.  While the rest of the world starves, we are awash in a sea of cheap food - and we worry about eating too much of it. We are lucky - very lucky.

You do not need "All You Can Eat" - what you need is all you should eat.
Newer Post Older Post Home