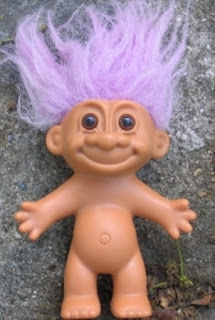 What are Trolls and how do they work?  Today, professional trolls patrol the Internet, "grooming" the image of companies by trying to discredit any negative information about a company or product.

Trolls have been around the Internet since the days of alt.fan.star-trek and Digital LA-36 Decwriters.  Back in the 1980's, I remember being in the "computer lab" at college, and watching a lot of the "Computer Science" majors (which was not part of the Engineering curriculum, but considered Liberal Arts, back then - if you can believe that!) type away at those old buzzing printer terminals, using up boxes and boxes of green-and-white lined paper discussing which character was better, Spock or Kirk.

I asked one of my Engineering friends what was going on, and he said, "Oh, they're just wasting time on the Internet."  And I asked what the Internet was, and he replied, "A big time-waster."

Not much has changed in 30 years, has it?

But even back then, in primitive on-line "discussion groups" which were accessed through dial-up "terminals" displaying ASCII characters, there were Trolls.

Back then, they were merely annoying.  They would post messages or respond to messages with cryptic and ambiguous comments (the hallmark of the passive-aggressive) or say something controversial to get everyone all riled up.

And they derived sick pleasure from this - for reasons I cannot fathom.  Well, actually, I can.  They are sad, lonely people, who don't have a life of their own.

But Trolling as of late has gone pro.   No longer content to just annoy people on fan-groups or discussion sites, the Trolls find they can now get paid to help groom a company's image.  So in addition to outright grooming posts, Trolls are employed to subtly alter how a company is perceived online.  And companies that do this are up-front about it.  Heck, they even advertise every morning on NPR's Morning Liberal Claptrap.

How does this work?  Well the obvious thing is to go on a review site and post a fake posting.   So on trip adviser, you could say such-and-such a restaurant is really great, even though there are roaches in the salad and they serve horse meat.

The idea is, to put up a lot of good reviews to counteract the bad ones - and pretty soon, a review site is pretty worthless, as you cannot parse the reviews because they are all over the place.

So, for example, you go to Netflix, and look at the review for a political movie like Atlas Shrugged and find that all the reviews are either one star or five stars.   A lot of people feel strongly about Ayn Rand, and want to validate her views, even if the movie sucked.   Just as many want to tear her down.  Neither group actually saw the movie in question.

In other words, it is not even a real review site, but a put-up job.  And no, they are not selling free energy motors (which would sell themselves, right?) but rather a book about the late inventor and his "invention" from the late 1970's which for some reason never took off in the marketplace.

So you can spam review sites, you can fake review sites, and you can try to spin the message.  But what about people who post negative reviews about your products or services?  How do deal with those messages, which are contrary to the interests of your employer?

So they bait you.  They nit-pick your arguments by pointing out alleged semantic errors and even typos - basically bullshit.

And if you respond to the argument, they tip their hand as trolls by saying "Well, I'd didn't expect you to get so upset over this issue!" - the clear implication being that you are the one being unreasonable, while they are making calm and collected arguments.

YOU:  I think the left-handed spanner sold by ACME TOOLS is not a very good value.

TROLL:  Well, clearly I can see you are upset by this issue.  I didn't mean to make you angry!  Why don't you calm down first, and take a look a the issue from both sides....

You see how it works?  They BAIT YOU and try to get you upset.  They want to get you to see red, so you get upset, which plays right into their hands.

But the troll always plays his hand, eventually, by doing the "you're upset" posting, which is designed to make himself look like the calm, rational analyst, and make you look like an unhinged loony.

Pretty clever, or so Trolls tend to think.

If you look at a lot of online discussion groups, this sort of thing goes on a lot - among both professional and amateur Trolls.

So what is wrong with Trolls?  Well, they don't really contribute anything of merit to a discussion, and in fact, are often just mouthpieces for a lot of really bad bargains.

People seek out validation for their bad financial decisions.  People want to believe what they want to believe, and will look for any tidbit that validates a bad decision.  Trolls provide that validation - they tell lies that fly under-the-radar and get you where it counts - in the lizard brain - that part of your head that wants it all now, but doesn't plan for the future or think too hard about actual costs.

So, when the car salesman says, "You know, buying this new car is a better deal than buying a used one, because it doesn't depreciate much, and the interest rates on used cars are higher!" you grab onto that argument like a dying man to a life ring, because you need some sort of "logic" to shout down the screaming voice in your brain that says, "$25,000 for a new car?  Are you insane?  You haven't even funded your 401(k) plan yet!"

Leasing makes sense!  You are only buying the part of the car you are using!

Buy as much house as you can afford!  You get a bigger deduction that way!

If I pay off the balance every month, I get these frequent flyer miles!

Might as well trade-in this junker, it is nearly five years old and the repair bills are higher than the monthly payments on a new car!

Cable TV is our only luxury!  Besides, it is cheaper than taking the kids to the movies!

I'm too tired to cook, and if we call now, we get a second pizza for FREE!  Don't forget cheesy sticks!

Five dollars isn't too much to spend every day on a cup of coffee.  And besides, it's only five bucks!  What's the big deal?

And so on and so on.  Trolls perpetuate these myths, through phony reviews and phony review sites.  And then they shout down any contrary views by attacking the person, not the argument.

And today, you see this in every area of debate - particularly in politics.   We evaluate politicians not on their views, but based on their personal lives or some perceived "gaffe" they make.   A politician makes a statement (e.g., "I am not so concerned about the poor") and the Trolls in the media jump on it.  They take a quote like that out of context to suggest it says something the speaker never intended.  And when the person who says it gets a little upset, well they play the "Gee, calm down fella, don't blow a fuse!" bit.

And I am not a Republican, but I don't think it is fair when the media Trolls like this.  I am no big fan of Romney, but they Trolled him with that "Poor" comment.  And then Santorum, who is one of my least favorite people on the planet, was "gotcha'd" by taking a comment that clearly meant one thing, and twisting it to say another.

I don't like Sarah Palin, either.  But she was right - the media is more interested in "gotcha" moments than in real issues.  Real issues are boring.  Entrapment is interesting.

The problem with this Trolling technique - even if it is applied to your political enemies - is that it can backfire.  First, it can be applied to candidates you support (and it is, Obama is routinely pilloried for supposed "gaffes").  But second, it turns the debate on political issues into silly semantic arguments.  This is not illumination, but obfuscation.

And in fact, Trolls make people so mad, they do tend to blow a fuse, which plays into the Troll's hands.   You can't win at their sick game, so don't play.

And this is why I don't watch television, as most of the stuff on there is passive-aggressive bullshit, designed to get you all riled up - and to get you to watch.  And it is one reason why I don't want to get drawn into long-winded debates here.   If you don't like what I have to say, well, too bad.   All the arguments in the world are not going to get me to "change my mind" and thing that buying brand new cars is a great idea, that "Pop Stocks" are good investments and that Facebook is "the next big thing."

Go sell crazy somewhere else.  We're all full up, here!

This is the Living Stingy blog, not the "Let's all validate each others' poor choices in life" blog.
Newer Post Older Post Home