Recession: A good year for BMW 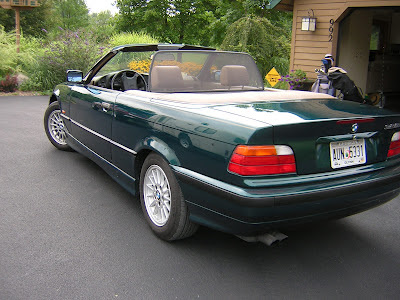 They do make lovely cars - which is why every automaker copies their styling.  My 1997 Cabriolet, back in 2010
A funny thing about this recession.   We are told, over and over again, how rotten things are, how the world is on the brink of collapse, and how the Greeks are going to bring down the Euro.   But at the same time, the world's largest luxury car makers (Mercedes, BMW, VW/Audi) are reporting record sales.  And many, if not most of these cars are being bought by middle-class and upper-middle-class people.

And BMW has reported that it will increase its annual dividend this year.  Dividend-paying stocks can be a good deal, for a company that is making money, paying dividends, and not messing around the Corporate Board Room to see who can loot the place the quickest.

And yet, BMWs can be notoriously expensive to own and maintain.  Parts are not cheap, and finding a good mechanic, once they are out of warranty, can be difficult.   Many a middle-class person has bought a BMW in their 40's, thinking they can "afford" it because they can afford the payments (and thinking they deserve a "reward for all their hard work) only to later be disillusioned once the car is out of warranty and turns out to be, well, just a car.

And yet, the company leads the world in automotive technology as well as styling.  In the 1980's, BMW introduced its icon E30 3-series, which presented the "rounded bar of soap" look in the traditional 3-box design.  Very quickly, other automakers, such as Toyota, followed suit (the 1987-1993 Camry being a clear copy of the style, including the large, horizontal tail lights).   GM even morphed its Pontiac grill to mimic the BMW Horse-Collar grill - a design theme that almost every automaker follows today (the Iconic Grill) with mixed results.  If you squint, even the new Buick grill looks like the twin BMW nose holes, morphed together.


When the E36 was introduced, in 1993, automakers followed suit, and soon a whole array of BMW clones from Japan, US and even Europe followed suit, with companies such  as Volvo offering "me too!" vehicles in nearly every category BMW competed in.   The Koreans got into the act once the E90 3-series was introduced, copying the taillight design slavishly, and even attempting to mimic the much-derided "flame surfacing" of Bangle.

BMW updates the E90 rear end, and guess what?

So does Hyundai with its Elantra.  Coincidence?  I don't think so.
Even the "Bangle Butt" which was introduced on the much-maligned 7-series, ended up as a mainstream design meme.  Today it is featured on a whole host of cars.  People complain that "all cars look alike" today - and that is true, they are all looking to look like lame copies of BMWs.

But of course, the list goes on.  The M Roadster chrome side intakes (which are functionless, of course) have been copied on everything from a  Ford Focus to a Cadillac Escalade.  The X5 was the one of the first modern cross-over SUVs (the AMC Eagle, notwithstanding) based on a car platform - in 2001.   Today, Detroit is making big news "discovering" the concept.

From a technology standpoint, things like automatic stability control and variable valve timing are pretty standard on most cars today.   But these were standard equipment in BMWs as far back as 1996.  People derided the "i-drive" control concept when introduced in the 7-series.  Yet today, almost every car has some sort of menu control, if it is offered with a built-in navigation and entertainment system.

And perhaps that is why BMW has been so successful - being on the leading edge, in terms of technology and styling.   People want the latest and greatest - as evidenced by the folks lining up and camping out overnight to buy a new iPhone that is slightly different from their old iPhone.  And yes, it is mostly a style thing.

Of course, many folks are buying such cars based on the monthly payment, and not taking into account the overall costs involved in the transaction.  But a $40,000 car loan, financed over 36 months, can be as much as $1200 a month in payments.   Spreading out the period of the loan as long as 72 months can bring the payment down to an "affordable" $700 or so.   But what usually ends up happening is that, late in to the loan period, the warranty has long since expired, and now the car needs maintenance, which can be very expensive.

But it illustrates, I guess, why both Apple and BMW have wild profit margins - BMW being the most profitable car company on the planet.   People pay extra for style points, and this allows you to inflate your profit margins, considerably.

So, in the midst of all this gloom-and-doom talk of a fractured economy and a failed Presidency (a little premature, aren't we, Mitt?) there are still folks lining up to buy luxury goods - smart phones and smart cars.

Perhaps, just perhaps, things are not as bad as the media makes them out to be.
Newer Post Older Post Home