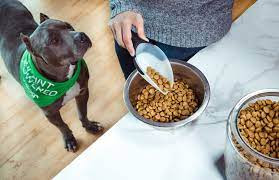 Sometimes it is good to shake things up a bit.
If you are feeling tired, lethargic, and just not getting things done, sometimes it is helpful to change your kibble.
What do I mean by this?  Well, we tend to fall into routines or patterns of behavior, which if left unchecked, can devolve into obsessive-compulsive behaviors.  We end up "in a rut" and feel that our lives are not getting any better, and are not interesting anymore.  And depression can set in.
And as I noted before, depressed people make excellent consumers, which is one reason why the TeeVee (the depression box) wants you passive and depressed, so you send out for pizza, get fat as a house, and heavily in debt - and then defend this as the great American Way of Life.
Change need not be dramatic, and in fact, large changes and promises of elaborate lifestyle changes often backfire, as we slip back into old habits and then feel even more depressed at our "failures".
Recently, I wrote about the relative costs of coffee and tea and this came about as we ran out of coffee, and I didn't want to drive to the wholesale club to buy more, and I didn't want to pay the grocery store prices for the stuff.  So, rather than panic, I said, "Well, let's brew some tea, instead!"
Panic?  Yea, when you've been drinking coffee for 30 years, you may tend to think you are addicted to it, when in fact, you are probably just addicted to caffeine, which tea also has.
So, the next morning we brew tea.  Takes less time, less mess, easier.  Hey, maybe....?
A couple of weeks later and we are still on it.   A trivial thing, a small thing, to be sure.   But a change, nevertheless, and one which energized me to get a lot of "projects" done around the house.
Changing your kibble can be as simple as changing your hair style, or maybe trying a new restaurant.  Trying things differently (not necessarily new things) shakes up the mind a bit, and can motivate you to action.
If you find yourself in a rut, consider changing your kibble.  Who knows?  It can't hurt, right?
And maybe this time next year, I'll decide to go back to Coffee - and shake things up a bit more.
Newer Post Older Post Home