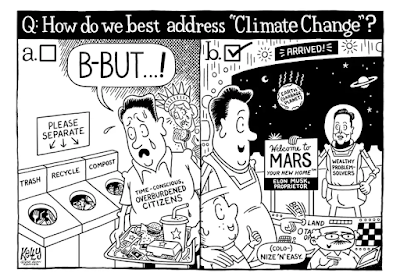 We shouldn't count on Billionaires to save us.

I live on Jekyll Island, which was once home to the Millionaire's Club - the Jekyll Island Club.  People like Pulitzer and JP Morgan had homes here, along with various other minor Millionaires, such as some stray Rockefellers, Goodyears, and Cranes (yes, the toilet people).  The Federal Reserve was formed here - giving birth to the most ludicrous of conspiracy theories (aliens or giants are supposedly buried on the island, and apparently all aliens want to do is banking).  The first long-distance coast-to-coast phone call was made from the island.  It was a bunch of rich fucks getting away from the smell and noise of the city - not to mention disease and epidemics.

Back then, industrialists and bankers were superstars, and everyone knew their names.  Carnegie (whose island is adjacent to ours) made his money in steel.  Rockefeller in oil, and so on and so forth. We worshiped these Gods from afar, and also resented them.  After all, people were suffering and starving and dying of disease, laborers were working long hours for low pay, and these same superstar Millionaires were sending out goons to break up strikes and unionizer's skulls.

The era of the superstar industrialist or investor sort of faded away during the great depression.  Perhaps the wealthy learned that making a show of oneself only made one a target.  Perhaps it was the income tax, which made it a lot harder to accumulate dynastic wealth.  Perhaps it was anti-trust laws which broke up Standard Oil, among others.  Or perhaps it was just the dissipation of wealth that occurs when children inherit a fortune - but not their parents' financial acumen.

For whatever reason, the "corporate man" and the faceless corporation replaced the superstar Millionaire of the turn of the century.   As I noted before, after he war, Mark's father was able to buy an estate in Westchester county for very little and convert it to a nursing home.  When the County told him he would have to install sprinklers in the old wooden firetrap, he sold it out.  Today, it is once again an estate, owned by some investment banker on Wall Street.

My own home town was this way.  Cazenovia, New York, was a vacation retreat for the wealthy from Boston and New York, who build mansions around the lake, in the early 1900's.   Then, World War I and the income tax, and, well, the houses were sold off to locals, who used them to house their large families.  Today, they are once again estates for wealthy people who commute to nearby Syracuse.   Well, at least someone has a good-paying job in Central New York!

And today, we once again have a bevy of famous industrialists, investors, bankers, and robber-barons.  We all know them by name - Gates, Bezos, Musk, et al.  They made their money the hard way - well the same way the robber barons of the late 1800's did.  You go big fast, crush the competition, and scotch any attempts at unionizing, break a few laws and more than a few regulations - and profit.  The only real difference is that today they are Billionaires, not mere Millionaires.  They are a thousand times more wealthy than in the past, at least in terms of numerical values.  Taking inflation into account, they still wield far more power than the barons of years-gone-by.

What is weird is that so many people today worship these Benevolent Billionaires. Elon Musk has a following of groupies online, who follow his every move.  Warren Buffet has his own fan club.   Many liberals are agog over Jeff Bezos, as he publishes the liberal Washington Post - and they can order their new annoying counter-top appliance using Amazon Prime.

But those same said liberals are silent about the working conditions in his warehouse, the blatant union-busting that goes on in his company, and the sharp practice that puts smaller competitors out of business.  No one chides him for the deceitful way his company tries to trick people into signing up for "Prime" by calling it "free shipping" - when you can get free shipping for free, without having to pay a Prime charge.

People adore Elon Musk and his electric cars and rockets, but no one talks about the sleazy things they did at PayPal to go big, fast.  No one talks about how Musk has blatantly manipulated the price of his stock through tweets, or how he hyped Bitcoin - taking a little money away from his very admirers, and putting it in his pocket.  No one talks about how he used his publicly-traded company to buy out a solar company run by his relatives.  He (or more precisely, his companies) have accomplished much (making a lot of money not yet, though) but how he has gone about doing it was, well, a bit odious.

And so on down the line.  Bill Gates seems almost like a charming anachronism at this point - making money selling an obsolete and clunky operating system, which thanks to monopoly practices, has captured over 90% of the market.

But like many of the others, Gates has sort of stepped away from actually running Microsoft, just as Larry Page no longer runs Google.  Musk has been pushed away from the day-to-day operations of Tesla, due to his run-ins with the SEC.   But they certainly make a lot of dough from the stock they still own!

In a way, there is a parallel here to the robber-barons of the turn-of-the-century.  I mentioned that nearby Cumberland Island was settled by the Carnegie's - but not Andrew Carnegie.  He sold out of US Steel, and gave half the money to his idiotic siblings, who built white-elephant mansions on Cumberland Island, many of which are now in ruin.  He donated the rest to charity - setting up "Carnegie Libraries" in towns and cities across the nation - as well as establishing other institutions.  And we all admired him for that, too.

Today, it is the Gates foundation, among others - and I am sure the other robber barons of this century have their own charitable causes as well.

And perhaps a new generation of unionizers and trust-busters will break up these huge companies and scatter their resources somewhat, as we did in the past.  It seems the drumbeat of discontent is rising, and perhaps these robber-barons know this, and are taking their money and leaving the field, just in time.

What got me started on this was a reader writing, citing an article from the New York Times (paywall) which was apparently mimicked here, only they confused the word "prize" with "price".  Elon Musk is offering a $100 Million in "X prizes" to people who come up with ways of eliminating greenhouse gases (plant more trees?  Gimmie da money!).
The article(s) in question were arguing whether such prizes were a good idea, or whether having the Patent rights was a better one.  The arguments for both sides are interesting.  Patents aren't a guaranteed payoff. Someone else may file before you, or your patent may be held invalid.
Plus, it can cost hundreds of thousands (sometimes millions) to enforce it through litigation. So you have to sell off a big part of the Patent to someone with deep pockets, in order to sue. If you work for a company, odds are, they own the whole Patent to begin with, as part of your employment agreement.
A "prize" (or "price") on the other hand, is a check that clears the bank right away.  How the prize is awarded, by who, and to whom, and what standard is used, might be as uneven as how Patents are awarded and enforced! I think the article noted this as well.
But the main point of the article(s) was that the prize will reward Elon Musk most of all - he gives away what to him is a pittance (and maybe doesn't have to pay if no one wins!) but gets ten times as much back in PR value. That old Elon - what a good guy! Forget about the insider deal with the solar company and whatnot, not to mention stock price manipulation, bitcoin manipulation, and so on and so forth. He steals a little from everyone, but he's a good guy!
It is yet another example of our Benevolent Billionaires doing what is best for all of us. Un-elected power-brokers deciding for us, what is best for us - and of course, what is best for them as well.
A new century and a new sheaf of robber-barons to deal with.  And perhaps, just like the last go-around, new regulations, new laws, and new taxes, will rein in this latest iteration of wealth concentration.
Perhaps.  In the meantime, don't add my name to the list of those who adulate the mega-wealthy.
Newer Post Older Post Home
View mobile version