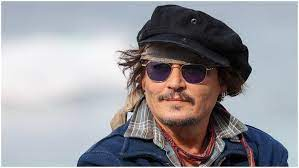 When your career goes in the toilet, and you've blown through millions of dollars, it's time to blame Liberals for your problems!  He thinks this is a "look"?

The Spanish film industry just gave Johnny Depp a lifetime achievement award, and people are livid.  No, not because he supposedly beat his wife, but because he was just a no-talent actor who starred in a bunch of forgettable movies, usually weird ones. His claim to "fame" was being the star of a "franchise" based on a ride at Disneyland.   Yea, Meryl Streep he ain't.

Depp, not realizing that a "lifetime achievement award" is a sign your career is over (they don't hand those out to 30-year-olds) railed against the press and liberals, claiming that political correctness has destroyed his career and prevented him from getting new film roles.

Now, granted, some actors start out as pretty-boys (or pretty-girls) and yet manage to morph their career into "serious acting" which you have to do, as you get older, as no one wants to look at your wrinkled face in any teen-based movie (unless it is a horror movie and you are Freddy Kruger).  Sure, Brad Pitt got away with it, but he can also act in addition to looking good.  He also took better care of himself, working out in the gym and forgoing the usual orgy of drugs and alcohol that destroys the careers of so many young Hollywood stars.

Depp's last major role, from what I can see, was as "Charlie" in "Charlie and the Chocolate Factory" - a weird movie directed by a weird director based on a weird book written by a weird author - in other words, Depp's milieu.   A friend recently gave me a copy of that movie, and we watched it (well, parts of it - we fast-forwarded through much of it and then ended it early) and wondered what the fuss was all about.  At the time, it was heralded by the critics, who thought Depp was doing his impersonation of Michael Jackson - the perpetual child.  Since then, it doesn't seem as funny or deep - or Depp.  It was just creepy and weird, and Depp's "acting" seems somewhat two-dimensional.

The famous ventriloquist Jeff Dunham once made the joke (Well, "Walter" made the quip) that "Men age like fine wine.... women age like milk!" which is not a dig at women so much as an observation as to what our society views as "beauty" or "handsome" in our culture.  Sadly, it seems Depp has aged like an open container of cottage cheese, left in the trunk of a car, in the hot sun, for a week.  The guy is plug-ugly and his fashion choices (the "I'm not going bald" hat) make it even worse.  For a guy who made a career being a pretty-boy, he has really let himself go.  And no one wants to hire an ugly pretty-boy, do they?

He's only five years older than Daniel Craig (the current star playing James Bond) but geez, Craig has keep himself up at least.  Heck, I'm older than Johnny Depp and I'm better looking that he is.  Maybe it is genetics, but he's been hit with an ugly stick - twice.  And sadly, such is often the fate of teen hearthrobs, who, once they round the corner of 30, go downhill fast.  Their ugly bloated faces appear in the supermarket tabloids in a "where are they now?" article, and we all feel a little schadenfreude about it.

Of course, none of this would be a problem for Depp if (a) he saved some of his millions and could afford to retire, or (b) learned to be a serious actor instead of just a pretty face, and morphed his career to more serious roles.  It's been done.  John Travolta was another pretty-boy who pretty much disappeared from the scene.  He resurfaced as a bloated middle-aged hit man in Pulp Fiction and audiences were amazed - not that he had let himself go so much as he could act.  And other roles followed - from playing a Bill Clinton type in Primary Colors to donning a fat suit and playing Edna Turnblatt in Hairspray.  This, even with his controversial religious views. No amount of fat suit is going to save Depp, though, if he can't act.

Movie producers want famous names for films because they know they are a "draw."  People will go see a Brad Pitt movie because Brad Pitt is in it.  They would go see a Johnny Depp movie because he was in it - even if his acting is, well, not very good.  And women in particular are drawn toward handsome leading men, provided they are not wife-beaters, drug addicts, or have let themselves go.  Depp was a "name" actor, but like many a professional athlete has discovered, your "name" isn't worth squat if you are caught running a dog-fighting ring.  It's on you, not on your sponsors, or the industry.

The wife-beating thing?  Yea, that didn't help, but it wasn't the sole cause of his career nosedive.  I suspect the substance abuse had something to do with it as well.   People have recovered from worse.  Woody Allen is still working - making movies that no one actually watches.  I think Depp's problem was the way he handled the whole thing in this "woke" era.  The Trumpian technique of deny, deny, deny and attack, attack, attack only worked for Trump and even then, Trump seems to have lost the magic touch there.

Depp tried to sue for libel in British courts - something that Oscar Wilde tried to do over a century ago, with disastrous results (he was convicted of sodomy and sent to jail).  It wasn't "cancel culture" that destroyed Depp, it was Depp that destroyed Depp.

But like any spoiled child - or any American, for that matter - someone else has to be to blame.  And blaming some amorphous "other" is all the vogue.  So "cancel culture" - a name that you cannot attach to any one group, person, or organization - is a convenient whipping-boy.  And boy-oh-boy did Depp make Fox News happy with that statement!  No doubt, Depp is the darling of the far-right, which makes you wonder what Depp's politics are these days.

Externalization!  A game anyone can play at any level of income or fame! From the poorest homeless man, to the richest man in the world, everything bad that happens to you is someone else's fault.  Because you know, we are all perfect people made in God's image.

UPDATE:  I received the usual hate mail from the Johnny Depp Fanboys.  Don't be a fan.  Fans are stupid and waste their lives rooting for someone else and not themselves.  You may recall the recent "protests" by Britany Spears supporters - as if a Hollywood has-been is worth protesting about!  Or Michael Jackson - whose "fans" turned out in number to protest his prosecution.  Ditto for "America's Dad" Bill Cosby.  Why would anyone protest for a private individual?  And what level of fandom excuses bad behavior?

I may enjoy the performances of a singer, actor, athlete or whatever, but I don't blindly devote my life to them - that's for chumps!

The reason why Johnny Depp isn't getting film roles or his latest biopic snooze-fest released is that he isn't a pretty boy anymore and never was a very good actor.  I mean acting drunk to play a pirate isn't acting - it is just a drunken actor.

And yes, wasting your life away weeping for the plight of multi-millionaires is the height of idiocy.

STOP WORSHIPING CELEBRITIES!   Think about your own life instead.