Is EZ-PASS Accurate? Hard to Tell! 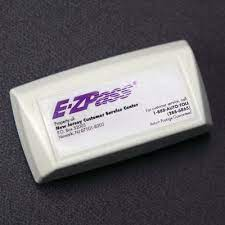 In the future, you may be forced to use EZ-PASS or other electronic toll collecting device.  Are these all that accurate?

Toll "booths" are going away, as I noted before, twice.  They were expensive to operate and maintain and dangerous.  Every year, some jerk would plow into a toll booth at 70 MPH and kill some poor toll worker.  So electronic solutions had to be found.  The two that seem to be most popular are electronic transponders (EZ-PASS or SUNPASS or the like) or Toll-by-Plate.  Both have their issues.

A recent article online mourns the loss of revenue from un-tolled cars.  Only 93% of tolls are being collected by Toll-by-Plate, which sounds alarming, until you realize the cost of all those government employees who are toll-takers - some at every exit, on some highway systems.  7% "leakage" is probably far less than the labor cost.   And oddly enough, little of this loss is due to intentional blocking of license plates (e.g., tinted plate covers, etc.) but due to things like luggage and bike rakes obscuring the license.

But the other side of the coin has yet to be explored.  Are we being accurately charged for these tolls?  Because if you have an EZ-PASS you know what I am getting at - the billing is opaque as all get-out.  To being with, the tolls listed on the site are in codes - brief abbreviations for the name of the toll collecting terminal, which can be hard to figure out.  Go from one end of the NYS Thruway to the other, and you may ring up over $100 in tolls, particularly towing a trailer.  Worse yet, the tolls are not charged all at once, but some may appear days or weeks later, on your account.  It gets confusing, and since many toll stations are in the middle of nowhere (and you whiz by them at 65 MPH) you have no way of keeping track of what toll was collected where and for what.  It's not like they are labeled or anything.
So you get a report like this, which is hard to parse:
09/16/21
21:26 E-ZPASS INCOMING AWAY TOL... 4 MASSDOT
LEE - WES...
Lane 02
09/08/21
09:48 -$0.90 $5.88
What is this toll for? And where?  What is disturbing is that the toll appears yesterday on my account, but as it indicates, I was in Massachusetts last week, which I was (checks credit card receipts) but of course, who keeps track of these things?  I have to trust them that their accounting is accurate, as I have no way of determining otherwise.

I wonder what would happen if someone made a fake license plate with my number on it (or someone else's) and drove through these toll stations.  You could really mess someone up, if you went on Reddit and brigaded this - hundreds, nay thousands of people all going through the toll stations with the same plate number.  Of course, that would be illegal, but as the Pennsylvania story points out, getting caught is awfully hard to do.

But at least with toll-by-plate, you get a photo of the car in the mail, along with a bill for your toll - a hefty bill, too.  There are discounts for using EZ-PASS or SUNPASS or other electronic toll devices, so it makes sense to get one, even if some of them (such as Ohio EZ-PASS) charge a 75 cent per month "maintenance fee" even if you don't use it.

And if you have more than one pass - watch out!  In parts of Florida, they take both EZ-PASS and SUNPASS and if you have both transponders on your windshield, guess what?  Yea, you get charged twice (I called to check on this).  So when I am in Florida, I put my EZ-PASS in a metal box, just to be sure.  Sadly, the SUNPASS is a sticker with a chip and cannot be easily removed like the EZ-PASS (which is a plastic box with velcro attaching it to the windshield).

These tolls are not an insignificant sum, either.  Granted, we are towing a trailer, so we get dinged with "two extra axles" and charged the same as some commercial users.  But like everything else in life these days, it seems there is a bit of sticker shock - it costs as much in tolls to traverse some roads as you'd use in gas - maybe more, if you have a Prius or electric car.  The days of tossing a quarter in the basket as you slowly drove by are gone - tolls are in the dollars now, and there seem to be plenty more of them.

Of course, some have pointed out this may lead to a situation of haves and have-nots - a dystopian future where only those with automated cars and automated toll devices can run on high-speed expressways.  The poor will have to muddle along at low speed on local roads, always stuck in traffic, or a series of stoplights.  Or, they risk tickets or arrest by trying to sneak onto toll roads, with obvious consequences, particularly if they are driving a car in a road restricted to automated Teslas.

Perhaps that won't happen - we'll create some sort of toll subsidy, just as the "Obamaphone" was created during the Reagan administration because people were dying for lack of basic 911 phone service.  Maybe there will be a "Bidentoll" (because Republicans can never admit to passing such laws - even if they are popular with the people) for the poor to use to access the superhighways of the future.  Maybe.

Already there are some "private" toll roads in America - although technically, this is nothing new - it goes back to the founding of our country.  Back in the day, for example, near my hometown was a "corduroy" road, made of logs placed on the ground.  It was a bumpy ride to be sure, and needed constant maintenance, but in an era of foot-deep mud roads, it was a big improvement.  And yes, they were privately owned and you had to pay a toll.  And yes, people tried to cheat the toll-taker by cutting into the road after the toll house (no cookies for you!).

But a funny thing happened.  The corduroy roads went away with time - as well as many private"turn-pikes" of the 19th Century - killed off by the canals and railroads.  How odd, because the railroads would later kill off the canals, and the car would later kill off the railroads - at least for passenger traffic.  It is possible that virtual meetings and telecommuting may kill off the car - or at least see a lot less traffic as a result - as I predicted before.  It took a pandemic for the rest of the world to see it. And maybe this is good news - but of course, no one wants to hear good news, do they?

Traffic during the pandemic was so light that a man set a coast-to-coast speed record in a rented Mustang - of 26 hours.   Thank God for unlimited mileage! He averaged 108 miles per hour.  Average - which means he was going much faster than that, most of the time.  But with no traffic - thanks to the pandemic - he flew though what were formerly congested cities and towns.  It makes me wonder if my prediction of a "Beltway Museum" may indeed come true - as traffic shrinks and we all stay at home "cocooning" the need for superhighways may diminish.  Only local truckers will be using them.  That and Amazon and Grubhub delivery vehicles.

Talk about dystopia!  It may have already arrived.