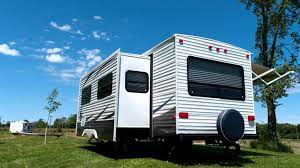 Slide-outs are all the rage, and in fact, it is hard to find a camper without them.  Are they worthwhile?

I recounted before how a friend of ours had a "paid-for" RV motorhome, but when they went to the "Motorcoach Resort" they were mocked by a neighbor - someone they didn't even know and would never see again - for not having a slide-out on their camper.  Duly shamed, they went to the nearest RV dealer to trade-in their "old" camper for a de-luxe model, which was repossessed a year later, when they couldn't make the payments.

There was a time, when slide-outs first became widely popular, where you could buy a camper without a slideout, for cheap, as everyone "had to have" a slideout, and in many cases, it was a matter of "me too!" engineering - adding a feature for the sake of having a feature.  And sometimes, it was ludicrous.

Well, OK, that's a small, low-end unit. The large bus motorhomes and 40' fifth wheels with four slides - that makes sense, right?  Well, maybe.  To begin with, such units are already huge, so there is already a lot of room.  And in many cases, these are the coaches that retired couples use, so there are only two inhabitants in these monster rigs.  And the room?  It is not very useful space.  We were in one Fleetwood coach (before the crash in 2008) and with the slide-outs out, there was a ton of interior room, suitable for ballroom dancing and not much else.  I mean, room is nice, but just empty space?  Is that worth the cost and hassle?

The other problem is with the slide-outs in, there often isn't any room at all.  Dinettes and couches on the slide-outs are now in the middle of the room, and the walls of the slide-out block access to the back of the coach.  In some models, you cannot reach the bathroom without sliding out at least one slideout.  Handy when traveling!

But beyond that is the design and quality. I addressed the quality issue before in another posting.  But it is the fundamental design which is the problem.  The slideout, by nature, is a box that slides out, and relies on a seal to keep water out of the coach.  The top of the slide-out is flat, so the water doesn't run off naturally - the seal has to keep it out.  And this is a sliding seal, not a permanent seal, so over time, it can leak - or even leak from the get-go.

Your car windows have a seal to keep out water, right?  So why do those work so well?  Well, the answer is, they don't and they are not designed to make a perfect seal, as auto manufacturers realized a long time ago that relying on a sliding seal to seal 100% of the time is foolish.  Instead, a small amount of leakage is expected, and water runs into the door and out the bottom through "weep holes" - which need to be kept clear of pine needles and detritus, lest the door fill up with water during a rainstorm.  You should check this.

Sunroofs are the same way.  Clueless owners claim "the seal is leaking!" but they are designed to leak, at least a bit.  The water is channeled away through channels in the side of the opening, through hoses, and down the A- and B- pillars and out the bottom of the car.  Again, if these channels are clogged, water backs up and suddenly there is a "leak" near the headliner.  Find those drain tube outlets on your car if you have a sunroof, and make sure they stay clear.  I covered this before, by the way.

So, slideouts - how do they handle water?  The designers assume the seals will always seal, and maybe they will at the factory.  But wear over time, UV light and other forms of degradation, plus the rocking and rolling motion of the trailer going down the road (which flexes even the most expensive coaches) will result in slight gaps and leaks, over time.

The fix?  A classic patch that would make Microsoft proud!  They put little awnings over the slides to keep rain out - and it works, provided the rain always falls directly down at a 90 degree angle to the horizon.  Anything else, and the water lands on the top of the slide.  And the awnings sag over time, so owners inflate a beach ball and put it under these awning-ettes to keep them from holding water.  This means, of course, you have to have a step-ladder lashed to the back of your rig, so you can access your beach-balls. Some fun! And super-convenient, too!

This doesn't even address the big problem - the slide mechanism itself. They are remarkably primitive and while some provide a manual crank backup, most newer ones do not.  So if the slide refuses to go in, you are stuck at your campsite until the "Mobile RV Repair" guy shows up.  Each campground brochure has paid advertisements from at least two or three Mobile RV Repair outfits.  It is a lucrative business!  And often the problem is something as simple as a blown fuse - but not a fuse in the fusebox, but rather hidden inline fuse or fusible link, buried behind the sofa or above the water tank or some other convenient place.

So why do people obsess about slides?  Well, to some extent, as I noted, you cannot find an RV without them.  No RV maker wants to lose a sale by not having a slide, so the "me-too-ism" effect strikes again.  This effect is noted in many other venues, such as computers or cars, where manufacturers feel the need to up the "features" (feature creep) so their product appears competitive on paper with their competition.  So they add a non-functional USB port, so they can claim the feature - expecting that few people will use a USB v.1.0 at a time when there were no USB products to plug into it.  Years later, though, people discover they paid extra for a non-functional feature.

If you make an RV with a slide - even a ridiculous slide like these 1-foot jobs - people who insist on having a slide are satisfied.  The non-slide or I-don't-give-a-damn people will also buy the same unit.  But the no-slide unit?  It has a niche market at this point.

There are, of course, some instances where a slide is helpful.  If you have a family of six and are buying a 40' "bunkhouse" model, you may need all that room for the family.  But in other instances, it is a matter of raising the level of complexity for no real gain.  For example, some modern rigs have slide-out bathrooms and slide-out kitchens.  Think about that for a second - such slideouts require flexible electric lines, plumbing lines, and sewer lines - not to mentions propane lines.  What could possibly go wrong with that?  What's more, think about what would go wrong if it went wrong.  Sewage on the ground, Propane leaks burning down your rig.  Nothing major, of course.

The other aspect of this is, modern RVs now tower over their predecessors, as manufacturers like to make full-width slides, so they mount the entire chassis above the tires to eliminate wheel wells entirely, so as to allow slides anywhere on the chassis.  So modern RVs are a lot more top-heavy than their predecessors, but then again, so are the tow vehicles - jacked-up pickup trucks that need a jacked-up 5th wheel trailer, just to clear the bed.

You might think all of this is carefully engineered and tested, but you'd be wrong.  I've visited more than one RV manufacturer, and the "Engineering" department comprises one or two guys and a drafting table (today, a CAD system).  Much of the engineering is provided by the component suppliers, who are not necessarily testing the final product. While your car may undergo millions of miles of testing and abuse at the manufacturer's proving grounds - and on the road in the real world - most RVs are made and then sold and you are the Beta-tester.  Real problems are often not discovered until years later, once the warranty has expired.

I related before how a friend of ours had a slide-out where the motor burned out.  They put to lounge chairs in the trailer and one leaned up against the slide-out switch.  "What's the humming noise?"  "What humming noise?  I don't hear it!"  "Well, don't you smell that electrical burning smell?"  Old people lose their senses and miss these things.  Yes, that was classic "user error" and they were fortunate - the slideout came with a crank so you could slide it in manually.  It wasn't hard to do, either - I did it for them on more than one occasion.

My brother-in-law bought a used "Titanium" fifth wheel - a monster of a thing and the pride of Canada.  Problem was, all the seals, such as they were, were shot.  The slideout was starting to settle on the frame, too, so even with new seals in place, you could see daylight with the slide-out slid in.  Not good.  And no way to fix it.

Of course, more expensive rigs have better quality slide-outs.  But you'd be surprised how even expensive rigs can fail - the very design is the problem.  When you rely on a sliding seal to maintain a perfect seal at all times, something bad is bound to happen.  For example, you camp under a tree, and leaves fall on top of the slide-out.  Or acorns, or a small twig.  Or God-knows-what.  You slide in the slide-out, and this detrius jams into the seal - which may let water in, tear the seal, or deform it.

So you get out your stepladder and broom and before you slide your slide-out in, and you climb up there and sweep off all the leaves and junk and remove your beach ball.  Again, convenient.  The idea that you can just care-free slide the thing in without checking is somewhat overstated.   And we see this all the time - people with elaborate 4-slide 5th wheels taking an hour or more to hook-up, because a half-hour is devoted to slide slavery.

Isn't there a better way to design slides?  Some way so the water runs off and the seal is not so critical?  Maybe a channel to capture water that gets by the seal and drain it off like a sunroof drain?   Maybe, maybe not.  One manufacturer I know of offers peaked slideouts, so the water will run off at least.  But the seal is still there, and wind blowing against the unit could force water past the seal, if it has any faults whatsoever.

It is just a basic Engineering principle that the more complicated you make any machine, the more possible modes of failure you introduce.  One reason I was a little hesitant to buy the King Ranch was that it had all these "toys" on it, and more modes of failure as a result.  We've already had two instances where the main screen failed to "boot" - which means no navigation, no radio, no HVAC controls. Fortunately, pulling the correct fuses (or disconnecting the battery) re-booted the screen.  And it hasn't happened since.  Hopefully it won't happen again.  But such is the nature of modern cars - they are more reliable than in the past, so we keep loading them up with more features to bring the reliability level back down.

From a personal perspective, there is a point to all of this. If you don't "need" to have a slide-out in your RV you may be in the catbird seat, as you will find that the prices of non-slide units are far lower (they cost less to make and are less in demand).  They also will provide you with one less thing to deal with while camping, and one less repair headache, or better yet, one less thing that can never really be repaired.