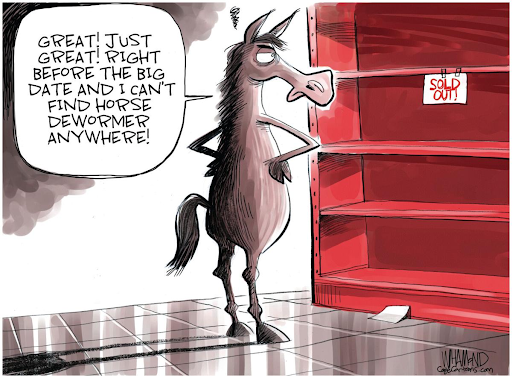 Poverty Stories are not just for rural rednecks!

I mentioned before, twice, about poverty stories.  These are stories that are designed to make unempowered (read: poor) people feel smart and clever about themselves, as being "in the know" about secret things going on, or whatever. Sadly, like with conspiracy theories, they tend to enslave the people who tell these stories, locking them into a lifetime of cherishing ignorance over intelligence, fancies over facts.

I was talking with some friends and they were having a good chuckle over this "horse dewormer" thing, which I am not sure is as big a thing as people make it out to be.  The Internet says everyone was eating Tide Pods, but in reality, few were - there were just a few loudmouths who put up fake videos, and a few idiots who took it seriously.

But the dewormer thing, along with other quack cures, are not funny anymore - people are dying from these things.  And yes, I was taken in by the "malaria drug" thing - some doctors were even claiming this worked - although later testing determined it didn't do much.  But that's the key - testing and science, not just believing in something that someone says will work.  Similarly, you can't dismiss something until it has been tested and proven to work.  With the malaria drug, there was at least some testing, but this horse dewormer thing seems to be coming out of left right field.

After chuckling about the horse dewormer story, my friends asked me, in all earnestness, if this 100 mpg carburetor really existed, and whether the Patent Office would "suppress" technologies that "threatened the order of society" and in particular, the power of the oil companies.  I had to explain, patiently, why this was not the case. The "100 mpg carburetor" patent, and most perpetual-motion patents, have in fact issued.  That doesn't mean the "technology" works.  You can't "suppress" technology that is published in Patents and books available for anyone to read!.  I also tried to explain why carburetors basically suck (no pun intended) and why they could never yield 100 mpg even in a tiny car.  But that was met with glazed eyes and "Yadda, Yadda, whatever!"

It is a lot easier and more fun to believe poverty stories!

What struck me about this conversation was that at one minute, they were ridiculing the beliefs of their own neighbors, who bought into this horse dewormer thing, because those folks were right-wing.  But a story that casts the government and Exxon-Mobil as the bad guys, hey, that's plausible, right?  We believe what we want to believe.

We want to believe that "we can afford it!" and "I'm not that fat!" and "this hat looks good on me!" because these are convenient things to believe.  Convenient to us, or so we think.  When we spend our last dime, however, we cry out at Wall Street or the 1%'ers as "taking our money away" when in fact we gave it to them.  When we end up in the hospital due to obesity-related illnesses, we cry out against the medical industry, or perhaps the fast-food one.  It can't be our fault.  And hey, that hat looks sharp!

The secret to getting ahead in life, I think, is to eschew things that sound too convenient to us, or at the very least, examine them critically and distrust them.  Lately, the political drumbeat has been to blame Joe Biden for the Afghanistan war and how it ended, when in fact, it probably couldn't have ended any other way - and the very same Republicans who started that war twenty years ago, have been calling for its end for a decade now.

Wars like that - as we learned from Vietnam, or were supposed to - are hard to win.  The civilian you are sent there to protect, puts on black pajamas at night and becomes an insurgent.  They both look alike and you don't have an easily identifiable enemy with a colorful uniform that you can confront on a traditional "battlefield."  You either have to bomb civilians to smithereens, or go home - or get caught in an endless insurgency, as the Russians did before us, and as we did.  And the bombing thing, well, now you're the bad guy, so that's not even on the table.  And no, neither is nuking them - or anybody - as that leads to World War III.  When the nukes drop on Boston, or New York, or LA, you realize too late that strategy doesn't work.

Even this drone thing, which Obama embraced and seemed "safe" can have blow-back.  What do we do when drones are flying over our cities, bombing us?  It wouldn't be hard to do - a 9/11 attack without airliners.  All you'd need is rusty old freighter to launch them from, offshore, fly them under the radar, and then drop them on a target - any target - to create chaos.  And they needn't cost millions apiece - simple and primitive technology could get the job done.  And you know, most of the guys I went to EE school with, were from the Middle East and have nothing to do with their time.  Just a thought.  Don't act shocked if when it happens.

The point is, conservatives are piling-on, using this as an excuse to bash Biden, just as Democrats would have done, if Trump was still in office and the same thing happened.  Politics today is just a collection of poverty stories with a political angle.  The parties and their partisans create this drumbeat of negativity that the plebes buy into.  Trying to explain the intricacies of farm subsidies to the average American is nearly impossible.  You get the same "Yadda, Yadda, whatever!" response to such factual instruction.  But you tell them that Trump has orange skin or Biden can't hold an ice cream cone (wtf?  Did I miss that?) and they lap it up!  "Look at [opposing politician] they're a doo-doo head!"

And yea, even I get caught up in this nonsense, maybe particularly I.  Ms. AOC is certainly some low-hanging fruit, in that regard.  It is just too much fun not to have fun with her.  But her fascination with garbage disposals is secondary - tertiary - to her political positions on real issues, and what she has accomplished (nothing) while in Congress.  That's what is important.  We tend to concentrate on the window-dressing and fluff and cotton candy, because hey, that's more fun.

Is there a real danger to these sort of poverty stories?  Well, hell yea.  Ask the guy in Idaho who took horse medicine instead of the vaccine, who is now in intensive care.  Well, you can't ask him, as he is in an induced coma and probably won't ever come out of it. More tragic are the stories about young pregnant women in that State, who are being intubated and sedated in a valiant effort to limit organ damage as much as possible. No word on the fate of the 7-month old fetus.  Pretty odd that the same people who want to outlaw abortion will let their baby die just to "own the libs."

One wonders how even survivors of CoVid will do in the next few years.  With major organ damage, will any live as long as their forebears?   I suspect that many who had the virus (and never knew it) may have this hidden damage.  We may see, ten years from now, people dying off from various CoVid-related organ damage, as they get older and more infirm.  Just a thought.  Pleasant thought!  Not very convenient to think, though.

But beyond immediate life-and-death scenarios, these sort of stories create a drumbeat of unrest.  The folks who asked me about the 100 mpg carburetor believe that the oil companies are "evil" but at the same time, have a yard full of internal combustion engine products - from lawn mowers to weed whackers, to generators, ATVs, tractors, cars, trucks, boats, etc.  Global warming?  Has to be someone else's fault.  And that is a convenient thing to believe.

People are willing to believe anything, though.  Another friend decided to buy one of these re-worked diesel VW's.  It was a car that VW bought back from the original owner after dieselgate, and retrofitted with the correct software and "exhaust fluid" injection system that it was supposed to have in the first place.  Of course, this meant it didn't get as good mileage as it did before - when VW spoofed the software to lie to the government.

I am not a big fan of VW, even before that incident.  They've made some good cars, but the history of the company, starting in the Nazi era, and the manufacture of what was the world's most unsafe car made in any quantity, sort of turns me off.  Their extended drive-train warranty was the result of the quality fiascoes of the second generation Golf, assembled in Pennsylvania, not the result of "precision German engineering."  VW has a checkered history, and their pursuit of market share over profitability is just part of the problem.  Volkswagen lied to us - told a whopper of a lie - and you know how I feel about liars.

So he bought the car, because he likes diesels, even though diesel fuel can cost as much as a buck more a gallon than gas, and even though many gasoline cars are getting diesel-like mileage these days. The price was attractive (not free, but attractive) and they promised a 100,000-mile bumper-to-bumper warranty on anything that could go wrong.  So, hey, what could go wrong?  I mean, they wouldn't lie about that, right?

Well, the check engine light goes on, and he takes it to the dealer and they claim the warranty is now voided because he used an unapproved air filter in the car.   Didn't see that coming, eh?   I mean, a company that deceived worldwide governments and all of their customers wouldn't lie again, would they?  Nah.

Well, hopefully he'll get it straightened out.  The Magnum-Moss warranty act would seem to negate the dealer's claim that the warranty was void - they would have to show a nexus between the "unapproved" filter and the failure.  We'll just have to wait-and-see.  What a pain-in-the-ass, though.  He thought he was getting a deal, and he ended up getting a hassle.

But then again, I guess it was convenient to believe it was a bargain at the time.  And convenient things are often inconvenient.

OK, that's a long way from horse dewormer.  But I think what I came to realize was that we are all subject to weak thinking and externalizing.  We all want to believe things that are convenient to us, and it is very hard - very hard - to fight this tendency in our nature.  The folks who get ahead in life probably spend less time thinking convenient things, and if they start thinking convenient things, they can take success and turn it into failure.  Consider the MyPillow guy.

I guess you can excuse the great unwashed masses for believing in poverty stories, but what's our excuse?