Why the 100 mpg carburetor is nonsense 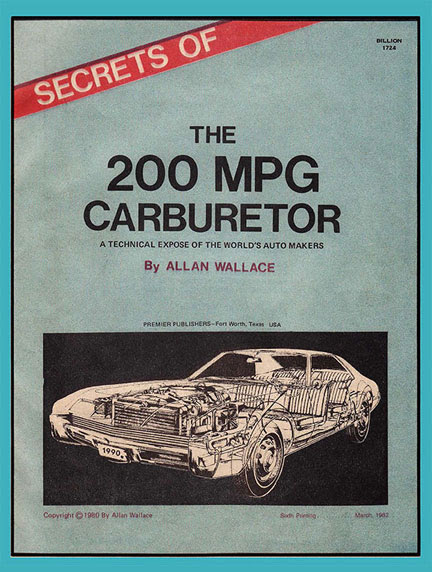 There are a lot of people out there who will sell you books about perpetual motion machines, high-mileage carburetors, and other nonsense.   Why is this all bullshit?


One of the conspiracy theories that I hear mentioned a lot (usually when I mention that I am a Patent Attorney) is that the "oil companies" bought up the Patent rights to the 100 mpg (or 200 mpg) carburetor, and are "suppressing the technology" to sell more oil.  Usually, the idiots in the audience where this is said, all nod their heads in sage agreement.   Everyone knows this, right?

Uh, right.  You see, there are a number of problems with these stories.

First off, Patents are all published.   You can search for them online now, download them, print them out, whatever.   The USPTO website has a search engine.  Many private companies have them - even Google.

The second problem with this story, is that from an Engineering standpoint, it simply isn't true.   While it is possible to get 100 mpg in a car that is very lightweight, has a small engine, and is designed for hyper-efficiency (but not for US safety standards)  such a car would have to rely on fuel injection.   You can't just slap a carburetor on your old Chevy V-8 and expect it to get 100 mpg.

Why is this?  Well, you first have to understand how internal combustion engines work.  A fuel/air mixture is put into the cylinder and ignited.  It does not "explode" (that would be detonation which would destroy the engine) but rather burns in a uniform manner.  A "flame front" works its way across the cylinder, from the point of ignition.   The expanding gases produce the pressure to push the piston in the cylinder.

This air/fuel mixture should be about 14.67:1 which is called the stoichiometric ratio.  If the ratio is too rich, the car will run, but at a lower efficiency, as some gas will be unburned (which produces smog).  If the ratio is too lean, well, you get an explosion (detonation) instead of a nice even flame front - and the result is usually a hole in the piston.

In the olden days, a carburetor was used to provide this air/fuel mixture.   Carburetors are very clumsy devices that only provide an approximate fuel/air mixture ratio for various speeds and conditions.  To avoid detonation, most were intentionally run rich.   In fact, some early "smog cars" of the 1970's intentionally ran rich and combusted unburned gases in the exhaust manifold (called a thermal reactor) using a separate air pump.

Fuel injection is a huge improvement over carburetors.   Using a simple feedback loop, driven by an oxygen sensor at the output (exhaust) the fuel injection system can vary the timing duration of the fuel injection pulse, to maintain the fuel/air mixture at a near "perfect" 14.67:1.

As a result, cars today are far more efficient and pollute a lot less.  They also make more power.

And along the way, other little tricks have been made to increase efficiency even further.   Variable valve timing (on both intake and exhaust valves) can improve efficiency and increase horsepower.   Variable intake lengths can alter torque curves.   Direct fuel injection (into the cylinder instead of the intake) can improve the burn characteristics.

And with things like hybrid drive trains (or diesel engines), it is not hard to get a car to go more than 50 mpg these days, although most are still far below this.   And if you are willing to sacrifice comfort, speed, acceleration, and safety, you can design a go-cart like car that might get over 100 mpg or higher.

But the idea that you could just slap a carburetor on a car in the 1970's (when a lot of these rumors started) and get nearly ten times the mileage, well, it is just laughable.

So why do people want to believe utter nonsense like this?

Well, again, it gives them a chance to be "smart" for a change.   Oh, sure, I went to General Motors Institute and studied Automotive Engineering and all, but they know the real score because they saw a YouTube video or read a book they bought online.

And it gives them an "excuse" not to take action in their own lives.   Here in Georgia, we have a lot of people who use full-size four-door pickup trucks as their personal transportation.   They get poor mileage (although men often lie about this, as well as their penis size).  They have no real 'need' for such a large vehicle, although when pressed, they will come up with a manufactured excuse.

So, of course, they spend an awful amount of money each and every year on gasoline - perhaps twice as much as necessary.   They could make better choices - get a smaller truck, or just admit they don't need a pickup truck to commute to work and simply buy  a car.

But it is easier to just say it is "all the oil company's fault" (and not their own) and then buy into stories like these, about 100 mpg carburetors.

Who profits from these stories?   Well, the oil companies and the car companies, ironically, as conspiracy theories turn ordinary people into passive consumers.   Believing in conspiracy theories is a form of learned helplessness.   Rather than take action in your life, and assume responsibility for your own decisions, you just lay in a corner and whimper about how unfair life is because of the oil companies.

So idiots who believe in these theories are often the same idiots who buy vehicles with the worst possible gas mileage.

People selling books also profit from this - such as the book shown above.   They can sell you a book telling all the "secrets" of the 200 mpg carburetor.  But for some funny reason, no one every goes out, buys the book, and then makes and sells this carburetor.   It would seem like a no-brainer, right?  The Patents were published, and have long since expired, so why aren't people using this?

For the same reason no one made the Ho-Jo motor work, in over 30 years.   But, if you want, you can buy a book that has the complete plans - and the Patents are there for everyone to see.   And a Patent, by definition, explains how the device works so that "one of ordinary skill in the art can make or use the invention."

The same is true for compressed-air cars.   People who know nothing about thermodynamics believe in this nonsense (and entrepreneurs solicit "investments" from such folks).  You can click on the link, or I'll give you the Reader's Digest version:  The energy density in compressed air is so low, that such vehicles will never have any kind of range.  But worse, the efficiency of storing energy in compressed air is so low that the effective mileage of such a vehicle would be horrific (like, worse than a Hummer).  These are limitations based on the laws of physics and cannot be cured through "further research and development" as proponents claim.   Compressed air is just not efficient, simply because there is no phase change (as there is with steam, for example).   Yes, you can make a car that will run - for about 5 miles.   But it would seat two people and get the gas mileage of a monster truck.

Electric cars, on the other hand, while having their own challenges, have proved to be, at last, somewhat practical, if not exactly affordable, yet.   Battery technology has made huge leaps, as it was not limited by any basic laws of Physics (such as Boyle's law).  Lithium Ion batteries have higher energy density and better efficiency than their lead-acid counterparts.   And Lithium Air batteries promise to perhaps double this.   We have not yet reached the physical limitations of this technology - so there is a future.

But, alas, this all falls under that messy "actually knowing something" rubric, and it is so much easier to just make shit up or just believe in whatever is convenient to believe in.  In other words, weak thinking predominates our society.

I could suggest to you, that if you believe in conspiracy theories that maybe redirecting these energies into useful avenues - such as a real education (and not a YouTube one) might be a better use of your time.   You won't get a job as an Automotive Engineer by believing in the 100 mpg carburetor.   You might get a job designing a 100 mpg car, if you stop living in a fantasy land and embrace reality (and go to school and stop smoking dope).

But alas, you can't tell a conspiracy theorist anything.   In fact, they will spend more time and energy trying to disprove any rational rebuttal of their insane theories.   Rather than wonder why they are defending these bizarre ideas that do not profit them personally they "double down" their bet on weirdness.  They will not change.  They will be losers all their lives.

The best thing you can do is walk away from people like that - whether they are friends, family members, co-workers, or whatever.   Hanging out with irrational people is a sure way to squander your own emotional energy.