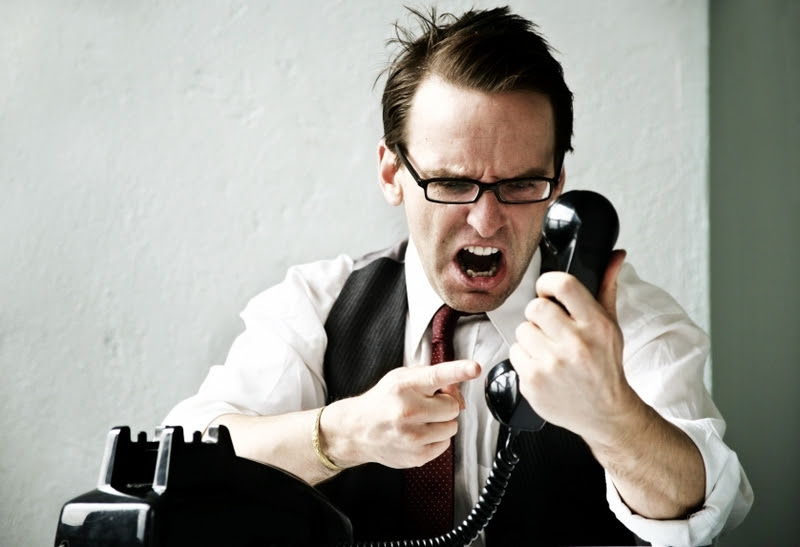 We've all lost it, at one time or another, trying to deal with customer service.  However, when you lose your temper, they win.  How you can avoid the customer service meltdown?


OK, let's face it, there is something satisfying about screaming at someone on the phone.  A lot of people do it - I think everyone has done it at least once.  Maybe not as bad as this guy, but bad enough.

This guy literally lost his mind, trying to get satisfaction from customer service.  Click to play.

But while this may give you existential satisfaction by screaming at a giant corporation, in reality, all you have done is browbeat some minimum-wage telephone operator, who probably is either laughing at you with his co-workers, or just ignoring you by muting your side of the conversation.

I used to do dumb things like this.  I try to do them less.  I have friends who think that screaming at people on the phone is the way to get ahead.  A neighbor thinks they got a better deal from their insurance company by screaming on the phone.  Another neighbor thinks a cable provider is "afraid" of her, because she screams on the phone.  The reality is, neither is true.  These companies just screw you royally and let you think you have satisfaction by letting you use their customer service rep as a punching bag.  They win, you lose.

How can you avoid the customer service meltdown?  There are a number of ways to prevent it from happening.

1.  Eat something.  Yes, low blood sugar is the number one reason you get upset - that and dehydration.   If your blood sugar is low and you are dehydrated, your blood turns to a thick goo with no sugar in it.  Your brain literally starves and it devolves to lizard brain mode. You revert to a caveman mentality.  Og angry!  Og kill customer service rep now!  Taking time away to eat and hydrate also allows you time to think about where you are going with this.

2. Gather Documentation. Get all your account numbers, statements, and other evidence that shows what has happened.   If there is an error in the bill, you'll need the bill - and your account number - in order to get something accomplished.   You'd be surprised how many people dash off a call to customer service without even having their account number.  It adds a lot of time to the call if they have to look up your account.  It also helps to be able to refer to the bill while you are talking to them.

3. Are You Wrong?   It is easy to make a mistake and end up in the wrong.  I got a charge for Bank of America the other day, for $7.99.  I had asked a friend to deposit a check and gave them a deposit slip and they deposited the check using a bank teller.  I had forgotten that as part of my online banking account that I was not allowed to use tellers - without paying the monthly fee.    I had not bothered to check that out before calling.  (I was nice to the guy, and he was nice back - waiving the fee this time, due to my "oversight").

4. Is the Service Worth It?  Unnecessary subscription services like Cable television, satellite radio, and smart phone plans, can drive you bankrupt, a little bit at a time. Calling up and complaining about bad service or poor billing practices isn't going to change anything.   When customers leave, a business goes under, or makes changes to bring them back.   Consider dumping the service entirely instead of trying to "fix it".   Companies that have shady billing practices and poor service are not going to change their stripes.

5.  What Are Your Goals?  Before you call, chat, or write, figure out what it is you want done.  Many folks have unrealistic goals.  "You made a mistake in my billing.  I want a complete refunds of all fees paid since the beginning of time.  You should pay off my mortgage, and then kill yourself and erase any record of your existence or that of any of your ancestors, going back at least 20 generations.  Oh, and the entire company should be given to me, tax-free"  You think I am exaggerating?  Some people really think this way.  Figure out what it is you really want, and then ask for that - and ask for something reasonable.  Again, people get into trouble when they expect outlandish bargains, when usually a basic "fair deal" is all you can expect.

6. Check out the Chat Box:  I recently had a problem with my UVERSE service that AT&T could not fix.  I went to the website and used their chat box and the people were very helpful and even called me to try different attempts at a fix.  They could not fix the problem - and I eventually fixed it by switching to Google's DNS server (Score: Google 1, AT&T 0).  But it was a lot easier and less frustrating to use the chat box than to wait on the phone  While waiting in queue, or waiting for the customer service rep to respond, I could do other things.  With a phone cradled in your neck, it is hard to multi-task.

7. Write a Letter:  Customer service phone calls often are not treated seriously.  Why?  Because the company knows that about half the people calling to complain are just blowing off steam.  They will yell at the customer service rep and then hang up and forget about whatever it is that was pissing them off.  If you write a letter, they generally have to respond to it, if nothing else to tell you to piss off.   And if you write a letter, you create a paper-trail which can be handy if you decide to go to court, even if it is just small claims court.   And companies realize you are creating a paper trail (and they are too) and act accordingly. Written letters, with documentation, often get better results than phone calls.

8. Be Nice:  The customer service rep can only do so many things.  Many can only just tell you the balance on your account. Some have trouble speaking English.  Being mean and nasty to some poor Indian dude at a call center isn't going to get your problem resolved.  However, you will perpetuate the myth (or reality) that Americans are a bunch of spoiled petulant brats who throw a hissy fit when their Vente Latte doesn't have the foam in the shape of a leaf.  If you figure out that the customer service rep can't fix your problem, or they are having trouble with language, just thank them and hang up.  Consider using chat (where language is less of a problem) or writing a letter.

9.  Don't Spend Four Hours on The Phone:  The fellow in the video linked above blew his mind on a customer service call, screaming and yelling and basically not getting anything accomplished.   He would not provide his name or account number, so the rep could do nothing to help him. So the rep likely muted his call and then interspersed it with bland comments.  Likely he and his friends were mocking the guy on the phone - as evidenced by the fact the call was recorded. Spending hours on the phone just isn't a cost-effective way of solving a problem.  If a problem takes more than 20 minutes or so to resolve, fall back and punt.   Write a letter, go to chat, or just consider disconnecting from the service, which was probably unnecessary anyway.

10.  Understand Customer Service Cutoffs:  Customer service reps have rights, too - at least in some call centers.  In some call centers, if you use threatening language, obscenities, personal insults, or raise your voice, the next thing you will hear is a "click".   The customer service rep is authorized to disconnect the call if you get all bent out of shape.  The more you yell, the more you holler, the worse off you are.   You will end up, like the guy in the video, calling back again and again and getting madder and madder - and getting nothing done.

11.  Have a Pen and Paper Handy:  If you are disconnecting or changing service, or getting a refund, or whatever, ask for a confirmation number, name or number of the representative.   Make notes and date and sign the paper.  It might not be a bad idea to follow up with a written letter confirming what was agreed upon.   One of the biggest gags in customer service - particularly by dying companies like AOL - was to say you were disconnected, and then not disconnect the service.   Document everything.

12. Understand the Retention Specialist:  If you call to disconnect service, you may be shunted off to a retention specialist, who is on commission.  Sometimes, you can play this game right and use the retention specialist to garner some swag.  For example, I called to cancel a credit card once, and they shunted me off to a retention specialist.  He asked me why I was cancelling the card, and I told him the rate was too high.  He said, "If we switch you from a Visa to a Mastercard, we can offer you 5.9% interest" - and he "retained" a customer.  Other times, however, "retention specialists" are on quotas and will harangue you to keep your service.  One way to deal with this is to say that you are moving overseas.   They will stop trying to re-sell you a new service if you are moving away.  if you tell them you are moving overseas, they won't try to sell you service for your new home.  Otherwise, they will just keep trying to sell you.  And be sure to get a confirmation number.

As I said, for many companies, customer service 1-800 numbers are provided just to let customers blow off steam.  Probably half the people calling up angry, end up going away unsatisfied.  When you call up and scream and shout, they win, as you (a) likely don't get what you wanted, and (b) they continue billing you for your service.

Karma is a bitch - and the Karmic wheel turns very fast.  I got very upset with Hughes Satellite Internet service, when they charged me a $40 disconnect fee.  I reluctantly paid it (after they sent a collections agency after me) but ended up getting the money back as part of a class-action suit. A similar thing happened with Vonage VoIP service.  As it turns out, there was no reason to get upset - in the long run.

Sirius XM did a similar thing recently - charging me $21 or so saying I hadn't properly disconnected the service.  I had called to disconnect, and the "retention specialist" tried to talk me out of it.  Since I did not stay on the line for a "confirmation number" the specialist counted me as a retained customer (and they have quotas).   Two weeks later I called again, and this time got a confirmation number.  I paid the $21, by money order - but a month later, they sent me a refund check.  I guess they realized they were being a dick.

I guess I am getting older and mellowing out. Or perhaps after dealing with telephone and cable companies and other service providers for a few decades, you start to see patterns emerge.   And one pattern that seems to be consistent is, if you get upset on the phone with customer service, well, you automatically lose.

The other thing is, I realize that most of these services are unnecessary in life, or at the very least, I should limit myself to as few as possible (today, just one, GoPhone from AT&T).  Having all the bells and whistles doesn't necessarily make one happy, just angry all the time, when half this stuff never works as advertised.