Search and SEIZURE (Criminals are Dumb!) 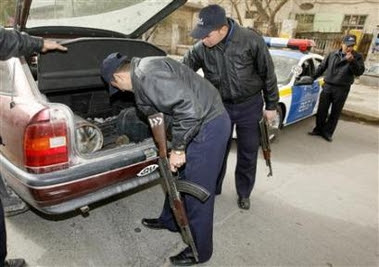 Many criminals willingly let the Police search their cars - even though they don't have to give consent.  And many criminals do this, knowing that there are drugs or other contraband in the car!


If you watch "COPS" or read the paper, you may be continually amazed at the stupidity of criminals.  It is almost like they want to get caught.

On one episode of "COPS" the policeman, on camera, after pulling over a suspect, asks if it is OK if they search his car.  Stupidly, the suspect says, "Sure!"  Inside are kilos of marijuana wrapped as Christmas presents - which the Police open up and find.   The suspect is under arrest.

The whole time this is going on, I am shouting at the television (I did that a lot), "You don't have to consent to a search!  You freaking idiot!"

Not that I am condoning drug smuggling.  But where do they get these people?   People complain about abuses by the Police - but then fail to assert even their most basic rights.

By consenting to the search, anything found in the car is fair game.  If the person said, "Gee, no, I'm kind of in a hurry, so just give me the speeding ticket and I'll be on my way!" the Police could not legally search the car - or charge him with anything other than a traffic violation.

If they did search the car, any evidence found would likely be throw out in court, as the search was illegal.   Sure, you'd get arrested, but you'd get out on bail and there probably wouldn't even be a trial.

...this illustrates the risk to you, if your husband or brother or roommate is dealing drugs out of your home.   The door may be busted in, and not only your house - but your place of business - may be searched, and everything confiscated.
______________________

Consider this case, recently on I-95 near our town.   A fellow is traveling to Miami with nearly a quarter-million dollars sewn into his backpack.  The police pull him over for a very minor traffic infraction and then ask if they can search the car.  He consents.

They find a back pack with nearly a quarter-million dollars in cash sewn into the lining.  Now, while this is "suspicious", it is not illegal.   As the driver of the car, you could say it was your life's savings, or that it was the money you were going to use to buy disposable cell phones to ship overseas (which he claimed was his business) and that you sewed the money into the backpack because you were worried it might get stolen.

Instead, the driver says he doesn't know who the money belongs to, and says a "friend" gave him the backpack to take to Miami.   So the police seize the cash and are holding it, and likely will eventually confiscate it.

Now consider his fate.  If he was a "mule" tasked with driving this cash to Miami for some drug lord, how long do you think his life will be, when he shows up without the money?   Yea, he'll be found floating in the bay, for sure.

He didn't have to consent to the search.   And when the backpack was found, he didn't have to make up some wild story about not knowing who the money belonged to.   It isn't against the law to carry money around and in fact, a lot of immigrants, mistrusting banks, rely instead on the old mattress to store their money.   A friend of mine works with local immigrants, and they buy trailers here (to live in) and bring tens of thousands of dollars in cash to the closings.  They are called "the unbanked".

Drug seizures of cars, cash, and other assets are somewhat disturbing.   You can read in the paper, every day, the "Official Notices" of such seizures.  In one recent case in our town, a couple's home in "the projects" was searched, and artificial cannabanoids were found.   They also searched the couple's local business and found about $15,000 in cash, described as being in "denominations typically used in the drug trade"  (what is that, exactly?  There are like only five denominations of cash!).  For some reason, they felt they should take the couple's flat-screen televisions as well.   Very odd.

In another seizure case, the police claim to have found, in the kitchen, "containers and instruments typically used in the drug trade for repackaging drugs for resale.   I have a Daisy seal-a-meal in my kitchen - and drawer full of Glad-bags.   Does this make me a drug dealer?   Of course, they did catch the "perp" after a high-speed pursuit, and when he fled the car, he tossed a bag of cocaine (wrapped in the containers used in the drug trade) into a ditch.  They seized about $24,000 in cash from his house.

Sadly, this has become a very profitable venture for local law enforcement, all across the country.   Of course, since they are seizing money and goods from criminals, not too many people give a damn.   But this illustrates the risk to you, if your husband or brother or roommate is dealing drugs out of your home.   The door may be busted in, and not only your house - but your place of business - may be searched, and everything confiscated.

From what I can make out on Google Maps and from the newspaper report, the couple owned a used-furniture store, which are quite popular in the ghetto.   The denominations of cash found were also "consistent with those used in the used furniture business".   In other words, the seizure was bullshit.   But now I sound like a defense attorney.

Why are criminals so dumb?   Well in part, these are the ones the Police can catch.   The more clever criminals are perhaps more elusive and less likely to be so obvious as to be caught.   And if caught, they are more likely to assert their Constitutional rights - and hire an attorney - to defend themselves.  Of course, that is one sort of odious aspect of this "seizure" deal - if they seize all your money as part of the arrest (and yes, bank accounts can be seized) then how do you pay your attorney?   And the answer is, you don't and you end up with a public defender, who plea-bargains your case down to a few years in jail and you lose everything.   Of course, if you were guilty this is not such a tragedy.

On the other hand, if you were just cohabitating with someone who sold drugs, this could be devastating.   And yes, there are some cases where the druggies have agreed to testify against the non-drug user, claiming that they were the "kingpin" of the drug empire.  Throw Momma from the train - or at least set her up for a felony conviction, while you walk.

So, what does this all mean?   Well, you have every right to assert your Constitutional rights.   The Police may lie to you (it is legal) to get you to consent.  "If you just let us search your car, we can then let you go and you can be on your way" - they like to say things like that, which sound appealing, when you are stopped by the side of the road.   You don't have to consent.   And if there is a dashboard camera on the Police car, be sure to face it and say loud and clear, "I do not consent to the search of my vehicle!"

But an even better tactic is just to not have anything in your car that the Police can arrest you for.   Drugs may seem like an awful lot of fun, but they do cause a lot of heartache, and a small part of this is their illegal aspect.   Drugs are also expensive, not only to purchase, but in terms of what they do to your personal finances.   Once you start doing drugs, the oddest things (like Bling Rims) seem desirable, and most drug users fail to save for tomorrow, or to invest, but rather just blow all their cash for the here-and-now.

But if you are reading this blog, I assume you are not doing drugs.   So what is the point?   Well, think long and hard about hanging out with people who do drugs, including siblings, children, parents, relatives, roommates, life partners, etc.   If you get pulled over in the car, and it is searched - and their drugs are found - you may be charged and your car may be seized.   Maybe you can clear it all up in court, eventually.   But is it really worth the hassle?

If your son is living in the basement and doing bong hits all day long, it is not some "harmless pastime" but one that could get him into serious trouble  which could cost you a lot of time, money, and aggravation.   And if he starts dealing drugs you could end up the victim of one of these overly-aggressive drug seizures.  Parents have lost their homes, when their sons were arrested for drug dealing.

Myself, I saw the problems with drugs and walked away from them.  The biggest problem wasn't the hassles with the Police (I never had any) but how drugs sapped the life away from me.  All my friends using even pot were going nowhere fast and that didn't strike me as how I wanted to live the rest of my life.

Since those days (the 1980's) much has changed.  Mandatory minimum sentences, asset seizures and forfeitures, as well as more aggressive enforcement, have made drugs even less appealing.  And the real risk, is that you could be caught up in this, even if you are not directly involved.
Newer Post Older Post Home