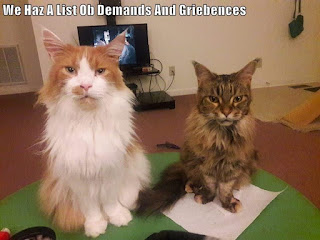 Having a list of demands is so trendy today - on a political level or a personal one.


It seems everyone I know has a list of demands - demands that I have to cater to. "I only drink Pepsi", "Is that vegan?", "Do you have any gluten-free options?" - and that is just with regard to food.  It seems that a lot of folks have these lists of things that they cannot do, eat, talk about, or whatever.

I decided that it is time for me to have my own list of demands.   Why not?   Why should everyone else have all the passive-aggressive fun?

2.  No discussion about anything on my list of forbidden topics (See Appendix A)

3.  No foods on my forbidden food group.  Not for anyone. (See Appendix B)

4.  I am not available on Tuesdays through Fridays, every alternate Saturday, Federal Holidays, and the first Monday of every month.  My schedule cannot be changed - ever.   You need to change your schedule to suit mine.

5.  You may not mention the country directly to the North of the United States (it may be referred to as the C-Country, if necessary, but only if really necessary).

7.  No smoking.  Not just in my presence, but in your personal life, too.

8.  No "Lite" beer - I don't care what everyone else drinks.  Nothing lighter than a Guinness should be served.  Anywhere.

9.  Lots of hot sauce on everything.   And I really don't care about your ulcer.

That's about it.  Just a few, simple demands that shouldn't inconvenience anyone.

If you think this list is kind of silly, well, it reflects the demands (although not the tastes) of a number of friends and acquaintances of mine.  I find myself stocking foods and beverages for friends, as they demand these when they visit, and will eat/drink nothing else.  If I happen to run out, I am castigated.

Funny thing, when I go to their house, they don't have a special larder stocked with my preferences.   In fact, my preferences are never sought or solicited, it is take it or leave it, which really, is the way it should be, right?   I mean, it is nice to stock something that a friend likes to have (as I do!) but when it becomes a demand, well.....

And sadly, this behavior spills over into our public lives, which is why I don't fly on airplanes anymore.   As Christians, we are really missing the boat here - not having special foods (other than the bland meal) we can expect to have catered to us.  The Muslims and Jews have this "special food" deal, which allows them to demand special treatment, while the rest of us have to go to the back of the line and make do with general slop.  What a setup!

But of course, it goes beyond that, and you know what I mean, too.   You see people who want to cut in line, or get special "diamond member" treatment.  You are elbowed aside, because they are "important people" which you can tell, because they leased a new Acura SUV and are up to their eyebrows in credit card debt.

Or people want to bring their dogs on the airplane, which is kind of cool, but there are other passengers to consider.  And don't get me started on "service animals" like service ferrets, chickens, monkeys, and pigs.   People drag their pets everywhere and say they need the animal in order to deal with their "social anxiety."

And of course, the get a note from their doctor - the same doctor who gave them their script for medical marijuana - which in turn is the source of their social anxiety.  But of course they are special people with special needs and how dare I question their "handicap" - right?

It is like the 350-lb man who rides around in Wal-Mart in his little scooter - living on disability, but his only disability being type-2 diabetes brought on by poor diet and gross obesity.   I am supposed to feel sorry for him, pay for his medical care (and three-wheeled scooter), give him preferential parking, and just generally get the fuck out of his way.   After all, he is an important member of our society.   Shit, did it every dawn on anyone that folks like him should be forced to park as far away as possible?   Not walking isn't the "cure" for his obesity, walking is.

Not that I feel strongly about this, of course.

It just seems that everyone has a list of demands these days, and for some reason, I have to comply with them.   When do I get to make my list?   And who will accede to my demands?

The answers are, for some weird reason, "never" and "no one" as I chose not to live as a victim.
Newer Post Older Post Home