Jesus and the Cult of Personality 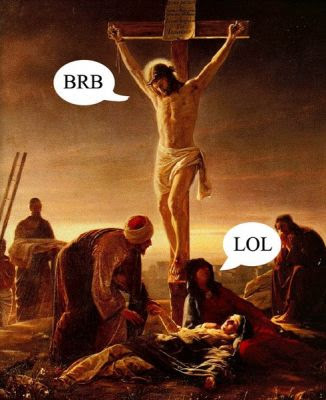 Many people who call themselves "Christians" really have no idea what Christianity is, other than a brand name for their particular form of hate.

Here in the South, you run into a lot of people who call themselves Christians.   A particularly odious form of them are called Baptists which is a synonym for hypocrite.   For some odd reason, Baptists claim they don't drink alcohol, even though Jesus turned water into wine and drank wine at the last supper.   There is nothing in the Bible to suggest that Jesus was a teetotaler.  But Baptists claim there is.

Compounding this problem is that many of them are closet drinkers and where I learned this was from, well, Baptists, who, after a drink or two, will talk trash about all their Baptist friends.

It strikes me that they really have no clue about what Christianity means.

Many people devote their lives to following Jesus' life - without really practicing what he taught.  Jesus the person is not nearly as important as the lessons he tried to impart.  But to many Christians - particularly those on the far-right, the core beliefs about Christianity have less to do what what Jesus taught than with Jesus as a brand-name superhero.

In their view, Jesus is a kick-ass vengeful angel of death, who will come back any day now, armed to the teeth, and start judging the righteous from the sinners.  Concepts like "turn the other cheek" and "Judge not, lest ye be judged" are tossed by the wayside in favor of a cult of personality they create about Jesus - not dissimilar to the one created in North Korea surrounding Kim Jong Un.

In their view, Jesus is Mr. Perfect, and like his Dad, is pissed off at sinners.  Sinners make him mad!  He can't wait to get back to Earth so he can kick some sinner's ass!

Yet, the Bible tells a different story - of a man who befriended sinners and forgave them - and died for their sins.   His best friend was a former prostitute.   Does that sound like the kick-ass judgmental Jesus?

And these right-wingers will twist and distort the Bible to make it say what they want.   On a long car trip through rural America, I listened - appalled - while a fundamentalist preacher tried to explain that Matthew 7:1-3 actually means that Christians should judge people.

"Judge not, lest ye be judged," he said, "Doesn't mean we shouldn't judge people.   Since we're Christians and are prepared to be judged for our actions, then we are in a position to judge others!   Not only does this Bible verse not say to not judge, it is a commandment to judge others!"

Yea, stop me when the world stops spinning after reading that one.  Kinda makes you dizzy, eh?

It gets even weirder.

Based on the rapture theory - a biblical theory that has only existed for about 100 years - some far-right Christians don't even think you go to heaven when you die.   Rather, you are dead, dead, dead, and until Judgement Day or the Rapture, then the dead will rise up from their graves (Zombie Apocalypse) and then fly off to heaven (if they are judged worthy).   So, you'd better be prepared to suck a lot of dirt for a few thousand years, until Judgement day rolls around.   If you think that's bad, consider all those people who died centuries ago - they've been waiting a long time!

These views of Christianity are distorted, weird, and often evil.   They do not teach real Christianity, which is a religion of compassion and charity, anymore than the Taliban teaches real Islam.   Both have gotten caught up in "brand name religion" which is more concerned with "my religion is right!" than with "What does my religion really mean?"

There is, of course, hope on the horizon.   We have a new Pope, who has stood the Catholic church on its ear.  Unlike our previous Pope, who wanted to go back to "brand name religion" and "how many people can I throw out of the church today?" the present Pope is making Catholicism more hip and trendy and accepting that most Protestant brands.   And this is ironic, as Protestantism was founded as a more liberal alternative to the Catholic church.

Today, the roles have switched - sort of like how Democrats and Republicans switched sides.   The GOP, believe it or not, used to be the anti-slavery party.   Today, there are many Republicans who would argue that slavery "wasn't all that bad" - and they do this all the time, on Fox television.   Funny thing, too, they have created a "Cult of Personality" around Ronald Reagan, while denouncing "Amnesty for Illegal Immigrants" - a policy which arguably was the greatest achievement of the Reagan Presidency.

I think this "Cult of Personality" is one reason why I am not a "brand name" religion shopper.   It seems that each religion, over time, turns away from its original message an instead turns into a tribal identity and cult of personality.   People are less and less concerned with the actual teachings of the religion (or what it should teach) that with the "everyone else is a heretic!" kind of deal.

They wear their "WWJD" bracelets, not as a reminder to think what a compassionate Christian person would do, but as a brand identity - to say, "I am one of the chosen" or as one bumper sticker proclaims, "Christians Aren't Perfect, Just Forgiven!"