Do people really like the new "My Little Pony" cartoon, or is it just a fad?


Hasbro has been hawking my little ponies since the 1980s.  It is the ultimate mix of commercialism and art.  They made a toy - and then made a cartoon to market the toy.   Why bother with advertisements, when you can just make a 22-minute ad for the toy?   Pretty smart marketing.

This phenomenon has sparked not just one, but at least two documentaries about the trend.

Some argue it is part of a "New Sincerity" movement - that people find release in these innocuous cartoons, which teach friendship and forgiveness instead of sarcasm and irony (and go fuck yourself).

Part of it, of course, is overweight 30-something males living in their parent's basement and smoking pot and watching cartoons all day long.  Oh, wait, that's being cynical.   Or realistic?  You decide.

Part of it was that the original writers put sight gags and cultural references into the cartoons, that went right over the heads of the 8-year-old girls who watch the show, but are appreciated by parents and the stoner male demographic.   And since the latter has the spare change to buy all the pony accessories, the show's producers have even pandered to the fanbase by making more cultural references and even inserting characters named by the fans.

Part of it also is that since it became hip and trendy, other folks have jumped on the bandwagon.  News alert - kids in high school and college do that sort of thing.  And hey, a t-shirt that says "20% cooler" is kind of neat.   It beats a "Hollister" shirt by a mile, anyway. 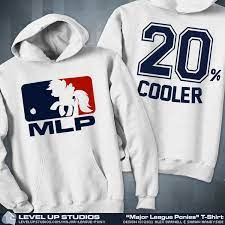 It is, of course, harmless fun.   And if these kids are really sincere about sincerity, maybe that is the start of something good.   The world could use a lot less of dog-eat-dog that we seem to have been embracing over the last 50 years.

On the other hand, it could just be a fad, like so many others before it - and these things kind of burn out after about four or five years or so.   The fact that a geezer like me is noticing it means it has probably jumped he shark already.

But it begs the question - can a "new sincerity" movement be founded on something as insincere as a cartoon that is little more than product placement for a line of toys?