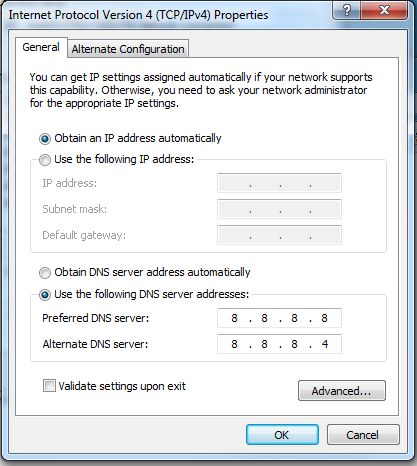 What do you do if suddenly, some websites don't seem to want to load on your computer?   I have been having this trouble for a week now, and the websites are all for the United States Patent & Trademark Office.

I called the USPTO electronic business center helpdesk, and they are usually on top of things.  They indicated a lot of people using AT&T or UVERSE were having trouble accessing the site.   They suggested that AT&T's DNS server was redirecting website requests improperly.

I called AT&T and they tried to help (three hours on the phone or in chat) but could not resolve the issue.  Sometimes "flushing" the DNS cache (c:ipconfig /flushdns) sometimes would help, as would clearing cookies.   But this only allowed access to some USPTO sites, and not all, and the next day, the problem would re-emerge.

The error message you get, depends on which browser you are using:

Chrome: This webpage is not available. The server at www.xyz.com can't be found, because DNS lookup failed. DNS is the network service that translates a website's name to its Internet address. This error is most often caused by having no connection to the internet or a misconfigured network. It can also be caused by an unresponsive DNS server or a firewall preventing Google Chrome from accesing the network. Error code: DNS_PROBE_FINISHED_NXDOMAIN

This latter error message (Chrome is more helpful than Firefox or Explorer in providing details) lead me to a Google Search which found some useful help.

This site has some helpful information:


Well, I tried this, and it works.  By using Google's DNS server instead of AT&T's, I can access the USPTO websites again.   Damn you Google, for being so helpful!   AT&T gets a "nice try" award, but their help desk people could not figure it out.
Newer Post Older Post Home