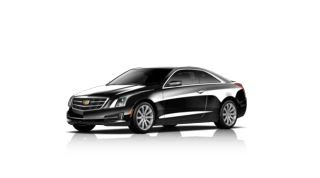 Cadillac is offering "ultra low mileage lease deals" to move their new cars.   Why not cut to the chase and put a pit with punji sticks, right at the entrance to the showroom?

I don't even commute to work anymore.  Sometimes I don't leave the house for days.  Mark drives the M Roadster (15 years old with 50,000 miles on it) about 20 miles to work, two days a week.   But the Nissan Pickup we bought 12 months ago, already has nearly 20,000 miles on it, just from vacation driving and going to and from the store on occasion.

It is really hard not to drive a car.  Really.   You can't just decide not to drive.  At least not in America.

Recently, I was at a restaurant and that had the requisite 20 televisions playing with the sound off, and I saw an ad for Cadillac, and they were hyping "ultra low mileage lease deals."   This ain't gonna be good, as Idella would say.

Curious, I went online to the Cadillac site.   Taking as an example, their "2015 CADILLAC ATS Coupe Luxury Preferred Equipment Group" which according to Edmunds.com sells for $40,548, they offer the following lease deal:

Example based on survey. Each dealer sets own price. Your payments may vary. Payments are for a 2015 CADILLAC ATS Coupe Luxury Preferred Equipment Group with an MSRP of $41,920. 36 monthly payments total $15,084. Option to purchase at lease end for an amount to be determined at lease signing. Lessor must approve lease. Take delivery by 01-05-2015. Lessee pays for maintenance, repair and excess wear. Payments may be higher in some states. Not available with other offers. Residency restrictions apply.

Note that there are a lot of assumptions and only certain people (not you or me) qualify for these deals.  In other words, you are not likely to get a deal this good.

The deal offered gives you only 10,000 miles a year, which is lower than the 12,000 miles that most leases allow - which is still far lower than the national average of 15,000 miles.   Right of the bat, I am thinking, "Gee, you could really put your wiener in the wringer with this one!"

Let's "do the math" on this and add up the overall costs:

That's less than what I paid to purchase outright my pickup truck, and while it ain't a Cadillac, it has more than a four-banger under the hood.  In fact, you can buy a nicely loaded Camry for about that much money.   Is the wreath-and-crest "status" really worth that kind of money?   I guess to me, no, as I always viewed Cadillacs as a joke - poorly made warmed-over Chevrolets that only clueless people from the midwest think are "nice cars" - people who have never driven a BMW or Mercedes (which frankly, are not that much more expensive).

But assuming you want this klown kar and not the Chevy Cruz that lies underneath it, would leasing be a better deal or not?   Well, of course not.

Ouch, that's nearly a $10,000 difference in effective cost, after three years.    And the good news is, if you put the car on a three year loan, at this point you'd own it outright and have the option to keep driving it.   The fellow who leases, on the other hand, is walking.

I am assuming a standard 5 year/50% depreciation rate here.  American cars do depreciate faster than most makes, but even then, the difference in depreciation is minimal.

Suppose our leaser turns in his car for an identical new one, after three years?  How would the costs then compare?  Well, now he has paid  $51098 to lease two cars over six years.  The fellow who bought and kept his car for six years (which should not be hard to do, with a quality made car that has a five-year warranty) now has a used car that is worth $16,248 (and he's not walking, either).   He has spent $27,077.40 overall - about half what our leasing friend did.  Now you can see why leasing really sucks - you trade off overall cost for monthly payment.

Note that when you keep a car you don't have to pay sales taxes and dealer fees again and again.  When you keep leasing new cars, these fees are added on each time - as well as the down payment fees and excess wear fees.  The "monthly payment" mindset can bankrupt you, over time.

And after six years, our leasing friend is now looking at leasing yet a third car and paying even more in excess wear fees, dealer fees, and sales taxes.  The fellow who bought is now three years without a car payment, and if he took care of the car, might be looking to keep it another 4-6 years without major repairs - at a very minimal cost.   He has spent so much less that he can afford to give away the car and still come out ahead of the lessee.

So why would anyone in their right mind take the lease deal?   Simple:  Monthly Payment.   The chump who leases basically gives away his trade-in as the "down payment" on the lease.  He then makes the monthly payments of $419 a month and thinks everything is hunky-dory, until he turns the car in, and realizes he owes nearly four grand in excess mileage fees.

The fellow who buys the car has to put down 18% as a down payment (according to the Cadillac site) or $7298.64 - which is nearly double what our lease chump had to come up with (but about equal to what he ends up paying, if you factor in the excess mileage charges).  Financing $36,026.76 over three years at 0.9% (assuming you qualify, which requires a credit score of 770) results in a monthly payment of  $1014.69

And guess what?  Joe Paycheck can't afford that on his monthly salary.   But under $500 sounds appealing even if the overall cost is far more.   The salesman tells Joe that he is "smart" to lease the car, as it lowers his monthly payment, freeing up his money for other things like "investments."   "Rather than tying all your money up in a car,"  he says, "you can invest your money and come out ahead!"

But as we see, you'd have to come out $10,000 ahead after three short years in order to just break even.   And guess what?  The Joe Paychecks of the world don't have $40,000 laying around to "invest" - they just want to get as much car as they can, for the lowest monthly payment.

Now bear in mind, this is for a pretty pedestrian, four-cylinder car.   We're not talking about even a 3-series BMW or anything.  For the price of leasing this "Caddy" you could buy outright a Chevy Cruz or similar car, sans the status symbols on the key fobs.

It is interesting to analyze these deals.   Bill Ford had it right - the car industry is going right back to their bad, old ways - doing anything to move iron off the showroom floor - even offering deals that they know will screw their customers in the end.

Like I said, the name of the game to day is to ruin your customer, financially rather than try to do business with him and hope to have him as recurring customer.  It is far more profitable to do the screw-job, and since people's economic memories are only about 18 months, well, they'll come right back to you and bend over yet again.

Of course the good news is, you can leave your pen at home and choose not to sign deals like this.   You don't really "need" a luxury car, and no, they are not that much more "luxurious" than more plebeian wheels.  But if you really feel you have to have one, the best deal of course, is to buy one secondhand.  That car coming off-lease is about half the price new, and the overall ownership costs would be less than half what the lease fellow pays, just to drive the car for three years.
Newer Post Older Post Home