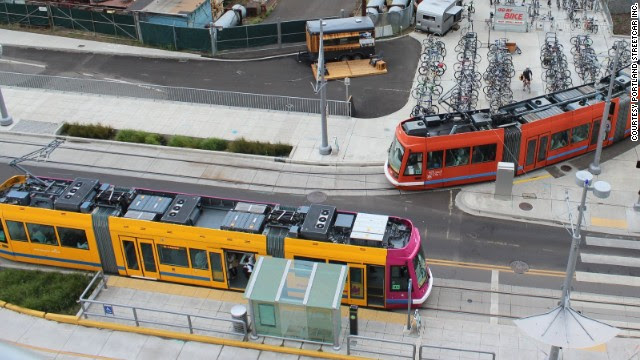 CNN recently ran a piece claiming that "America is falling in love with public transit" - and they use statistics to back up this claim.  Public transit use is up by almost 2%!!!!

"From July through September of this year, total U.S. trips on commuter rail, subways, buses, streetcars and trolleys topped 2.7 billion. That's an increase of 1.81%."

The world population is increasing, as is the population in the United States.   And as cities grow larger and more crowded, more people ride public transit.

America's population increases by about 0.7- 0.8% a year.  So about 1% of this 1.8% increase in public transit use (the amount varies by cities cited in their survey) is just due to population growth, period.

The rest of it?  I think it has less to do with a "love" for public transit than the fact there are no alternatives for many folks these days in crowded cities.

When I lived in Alexandria, Virginia in the late 1980's and early 1990's (that seems long ago to some, but it was like yesterday to me) you could drive to downtown DC in about 20 minutes - and a parking space at my office was either free or only $100 a month or so.   Driving was affordable, and using the Metro, as I noted before, could take hours back then, as the trains only ran every half-hour off-peak and they did not coordinate train schedules, much less bus schedules.

Many parts of Alexandria were abandoned, unused land.   Where the U.S. District Court House, the Patent Office, and acres of office buildings and condos now stand, was at the time, an old railroad roundhouse, a dilapidated lumber store, and just acres of unmowed grass.   Eisenhower avenue didn't even connect all the way to Van Dorn street.   In 30 years, all of that has been "built up" and I watched this happen.

Today, the idea of a quick drive to downtown, from where I lived near Mt. Vernon, would be a joke.  And finding parking would be far more difficult - and expensive.   The government increased in size - under Bush and Obama - and many more people live in the area now.   I left.

Most cities across America (other than Detroit) followed a similar pattern.   People are moving to cities and thus, they are using public transit more.

Is America really "falling in love" with a bus or subway?   I am less sure of this.   I think it is more a matter of what is convenient to them in a lifestyle and a changing environment - plus the inevitable growth in population in general and urban population in particular - as well as increased availability of public transit.   In view of those factors, a 1.81% gain in ridership is low.

And that one or two days a week they do go to the office?   Well, they are more likely to use public transit, as paying for an expensive monthly parking permit to go to work a couple days a week makes no sense at all.  I was paying about $100 a month when I worked at the USPTO.  I can't imagine how expensive it is now.

And then there are folks like me, who telecommute all the time, and rarely leave the house.   Taking out the 10,000 miles I drove this summer on my annual sojourn, we drove a combined 15,000 miles this year, if that - or an average of 7,500 miles each - about half the national average.  When you stop commuting entirely, the amount you drive drops off the map.

CNN, sadly, has decided to go on this "progressive" route, and try to be a left-leaning alternative to Fox News (but not as left-leaning as NBC news).  And as such, it slants all their news stories to fit a narrative they want to sell.

And that is the key word - sell.   They want to capture eyeballs to sell you products.  So they report the news they think their viewers and readers want to hear - and will click on.
Newer Post Older Post Home