Is the Santa Lie Good or Bad? 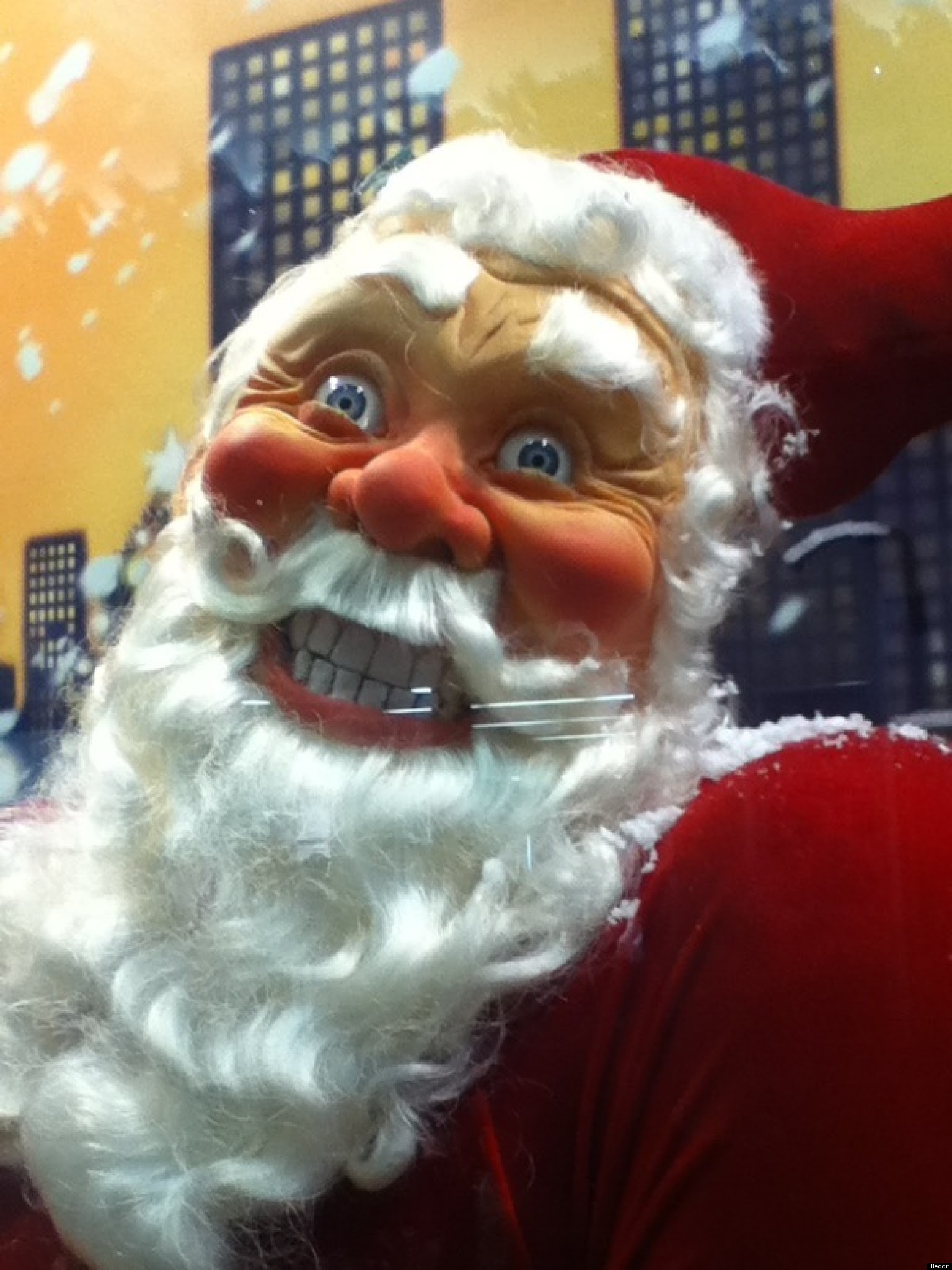 Is lying to your children about Santa a good thing or a bad thing?


One thing I keep harping on in this blog is that in any discussion or debate, you need to challenge the underlying premise of the debate, before addressing the arguments head-on.   In many cases, an opponent tries to frame a debate based on certain assumptions which, if you adopt them, you basically lose the debate from the get-go.

And we assume a lot in our culture - we just gulp down cultural norms and normative cues without questioning them.   And then we wonder why our lives have gone wrong - why bad things happen to us for no apparent reason, and why we are so unprepared for bad things to happen in our lives - when they are often predicable events.

It is the holiday season, and once again, we are expected to act like lemmings, from Halloween to New Years, by engaging in the same rituals and activities.   We are expected to buy all  the same foods, shop on the same days, buy all the same goods (including this year's "must have toy!" helpfully hyped by the media).  And of course, we are expected to wait in long lines and shell out big bucks to all travel at once, so we can all "go home for Christmas".

And the "holiday season" is fun and all, when you are eight years old.   But by age 25 it starts to wear thin.   By age 35, you start to wonder what the point of it all is.  By age 55, well, you're done - if you have any imagination at all.   On the other hand, if you are a mindless plebe, you probably get excited about "the most special time of the year" for your entire life, as you are continuously surprised by even mundane events in your life.   A lot of people are that way, and probably that is a good thing, as it anesthetizes them from reality.

One of these underlying assumptions - at least among nominal Christians in the United States - is this entire Santa Lie, as some psychologists call it.    Parents tell their children a set of beliefs about Easter Bunnies and Santa Claus and try to get the kids to believe that supernatural forces are at work in the delivery of presents.

It is interesting to watch parents in this act, as it seems the parents enjoy it more than the kids do.   They seem to get a thrill out of deceiving their children, going to great lengths to sell these Santa stories - and to demonstrate to their friends and family that their three-year-old "believes".   "Who's coming down the chimney with presents next week?" the hopeful parent prompts, in front of friends and neighbors.   When the toddler replies, "Santa!" the parent applauds and looks on to their friends as if the child just performed a magic trick.

Perhaps parents enjoy this form of control over their children - being able to mislead them and make them believe in just about anything.   It is sort of a cheap trick, deceiving children, and sort of a form of bullying.

I had an older brother who used to play tricks like this on me.  I was about maybe three or four years old, and my brother and I shared a large room over the garage with two closets with sliding doors.   My oldest brother would show me a "magic trick" by closing himself in one of the closets (metaphor time, here) while I had my eyes closed.   When I reopened my eyes, I would open the closet door and he had vanished!   Magically, he had transported to the other closet!

Of course, what he did was, just walk over to the other closet while my eyes were closed.  But at age three, I couldn't figure this out - and my oldest brother thought it was the height of amusement to bedevil a three-year-old.   I am not sure what his thing was, but I suspect that he wasn't too keen as an only son, when Mom and Dad decided to have two more children.   "Things were just fine until you two came along!" I am sure he felt.

But getting back to Santa, it is such a good thing to lie to your kids at such an early age?   It is funny, but having older siblings and other friends on the block, I realized that Santa didn't exist by the time I was five years old.    When I mentioned this to my parents, they were none too pleased.   In fact, my other brother was pissed at me - thinking that by blowing the whistle, all the Christmas booty would be cut off.  So I played along for a few more years, realizing that adults sort of got off on having their children say they believed in this nonsense.

And that is one other aspect of the Santa Lie that is sort of odious - using the threat of Santa to control children.  "Be good, or Santa won't bring you presents!"    A recent (2005) trend has been the commercially marketed book (and action figure) known as "Elf on the Shelf" - which posits that an elf is sent by Santa to spy on little children.   The book tells the story of the elf and comes with a small elf that parents are encouraged to hide around the house, so that the children will find him peeking at them from a new location every day.   That ought to keep little Timmy from touching himself!  Better get the kid used to 24/7 surveillance while he's still in the cradle, right?

The odious thing about "Elf on the Shelf" is that it is one of the many recently manufactured "traditions" and in fact, the book says "A Christmas Tradition!" or "A Family Tradition!" right on it, although it is a "tradition" with a commercial shelf-life of less than a decade.  As I have noted before, if you are a recording artist, it pays to make at least one Christmas song or album.   It will get played, year in and year out, and generate royalties forever, as people get tired of hearing the same old Christmas songs.   An entire movie was made, based on the premise that the protagonist didn't have to work by dint of his Father recording a Christmas song years ago - that allowed the son to collect royalties for his whole life.

And actually, making a Christmas movie - no matter how bad - is also a smart move, as it will be guaranteed play every year on the cable channels.  But I digress....

The point is, the authors of this "Elf on the Shelf" thing were really smart - creating yet another new Christmas "tradition" (hey, it says so, right on the cover of the book!) so that everyone will be forced to go out and buy this damn elf thing and book.   I guess we'll have to kick some other tradition under the bus, as we're pretty much all full up here.   Jesus or Charlie Brown Christmas?   Um, Jesus, I guess.  He had a good run, but kind of hogged the limelight.  Besides, who doesn't like doing the Snoopy dance to "Linus and Lucy?"  Now that's a Christmas tradition in our house!   But I digress further....

Another harmful aspect of the Santa Lie is that it fosters greed and materialism.   My Mother was one of those who thought the Christmas Tree should be awash in presents.  And in many years, you could not see the tree for all the booty stacked up in front of it.   As kids we were taught to consume, not to save, and the saying was, back then, that the presents were all opened by 10:00 AM and by noon, half the toys were already broken.   The Santa Lie taught us that life was all about accumulating things, and I am not sure that is a healthy mythology to be teaching children - imprinting them, if you will - at such an early age.

The use of Santa and the Easter Bunny does tend to undermine religious belief.   We teach children these "baby beliefs" and then quickly expose them (usually by school age) as lies.   Then we ask them to believe in a second set of supernatural creatures, but hey, this time, we aren't kidding - they really exist.   And this is a good reason why many fundamentalist Christians are not happy with the secularization and commercialization of Christmas - and I think they have a point.

But could there be another reason - maybe a mentally healthy one - for the Santa Lie?  Perhaps.   As a child, you live and die at the whim of your parents.  For children raised in abusive homes, this is often literally the case.   Everything you own, say, or do is controlled by your parents, and perhaps it is only natural for some resentment to form, as everything in your life - including your existence - is a result of their largess.

So, when all that booty under the tree isn't from your parents but from Santa, well, it doesn't seem to a child that the parents are all-powerful after all.   My Mother would have cards on all the presents, and some things (like socks and clothing) were from "Mom and Dad" while other things (like toys) were from "Santa".   And even Mom and Dad got presents from "Santa" so it made it seem that they were also beholden to the jolly old elf from the North Pole.

And we buy into these ersatz "traditions" lock, stock, and barrel, without thinking too much about where they came from and whether they really are what is best for us.


UPDATE:  It occurs to me that the Santa Lie may serve a useful purpose in society and perhaps was intentionally or unintentionally started by some folks who are agnostics or atheists. Since being agnostic or atheist is viewed badly by the majority of the population, the Santa Lie is a great way of indoctrinating future atheists.

It goes like this:  You teach some young impressionable kid these stories about omniscient fantasy characters who can secretly watch you and judge you and who have supernatural powers and can shower you with gifts or punish you if they desire.  We call them "Santa" and "The Easter Bunny."

Within a few years, you expose these characters as frauds and then ask the child to now believe in a new set of characters called "God" and "Jesus" with very similar supernatural superpowers.   The kid now has a subliminal message in his brain that these sort of made-up stories may in fact be false.

It is a very subversive way to subvert religion and you could not design a better mechanism for that purpose.