Eternity - Why It Doesn't Exist 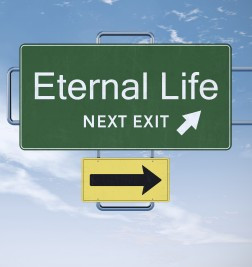 Many religions promise eternal life.  How would that actually work out?


Almost every religion on the planet is based on the fundamental principal that if you do good in this life (i.e., obey the leaders of the religion in question) you will get some sort of better life after you die.

Let's do a little thought experiment.   You die and go to heaven.   Right off the bat, you can see a problem.   You see, not all your friends and family get to go with you.   Some religions even say your dog Rusty won't be able to join you there (The Pope has let up on this recently, however).   How can heaven be "perfect" if you are not with your loved ones in the afterlife, simply because they cursed out loud and ate shellfish?

But let's let that slip.   Think for a moment about eternity and what it really means.   They say the human mind cannot contemplate infinity - which is why religions get away with this "eternity" nonsense.

Well, first thing is, you'd party.   I mean, this is heaven, right?  So you could do whatever you want.   Do all the drugs you want, all the sex you want, and drink all you want.  Your perfect body would never die.   And for a few thousand years - maybe a few hundred thousand years, maybe this would be kind of fun.   But eventually, that would become boring.

Ever wanted to drive a Lamborghini?  Well in heaven you could - and wreck it every time.   And since you live forever, you can drive all the great cars they invent in the future.   You could just consume in excess amounts every day, all day.   And maybe after another 100,000 years, you'd be bored with that.

So maybe then, you'd get serious.   Read all those books you wanted to read all your life but never had time for.   Heck, now you have infinity - eternity.   You can read every book every written, from cave paintings to the latest trashy detective novel.   Heaven has a heck of a book club - and you can meet most of the authors in person, too!

Maybe after a few hundred thousand years of that, you'd get bored.  Maybe you could write your own books.   Sure, you'd suck at it, initially, but after 200,000 or 300,000 years, you'd probably be quite an author.  And you could consult with Charles Dickens or Mark Twain - as they would literally have all the time in the world to tutor you.  After writing every possible book there is to be written (which is an awful lot of books) you'd be bored again.

And music - you could take lessons from everyone from Beethoven to Jimi Hendrix - and eventually have more skill than both combined.  After all, you have eternity to practice.   You could write - and mathematically speaking - will write every piece of music ever conceived by mankind.   Eternity is a long enough time to do this.

Maybe you'd learn languages - all of them - an become fluent in everything from Aramaic to Esperanto.   I'll bet that was quite a fad in heaven for a million years or so - speaking Esperanto and all.

Now let's see - how much time do you have left.  Oh, right, eternity.

So you do what most people in heaven do - you watch what people are doing on Earth.   And you can watch the entire history of human civilization, until the sun burns out, if you want to, maybe 400,000 or 500,000 times - or an infinite amount.  Infinity times infinity equals infinity.

Given all the time in the world - an infinite amount, actually, you will eventually learn all, know all, and do all.   Once you reach that point, there is little to distinguish you from God himself.   How could you exist in heaven, live an infinite lifespan, eventually know all the secrets and powers of the universe, and still exist as subservient to God?   Logically, it is a mess.

What makes life worth living is the fact it is finite in length.  You can't be expert in everything.  You can't own every kind of car, do every kind of drug, have sex with every super-model.   You have a limited time, limited budget, and limited talents.   In that time period, with the resources you have, you have to forge a life for yourself.

And what makes life relevant is that it is fixed in length and you can only do so much - and yet do so much.

Eternal life?   As I noted, logically it makes no sense.    If everyone lived an eternal life, we would all end up as Gods.   And not only that, it would be boring as hell, as with infinite time to waste, nothing would be a challenge and everything - being perfect - would be too easy to do.

The concept literally makes no sense.   It is like dividing by zero.   The answer is indeterminate.

As I noted earlier in this piece, the human mind cannot conceive of infinity.  We try to, but we always try to fit a beginning, middle, and end into it - and it doesn't work that way.

To people living in olden times, when living to age 40 seemed like an impossibility, "eternal life" must have seemed like a good deal.  That would be like what, 80 years or so!   Like the robin who cannot count more than three eggs in her nest (and thus doesn't notice the fourth being stolen) primitive man could not conceive of numbers greater than 50.

To them, "eternal life" in a "perfect body" seemed like a swell deal, particularly compared to the short, brutal lives they lead, in a disease-wracked and pain-filled imperfect body, toiling from sunrise to sunset, as serf for some nobleman.

Today, however, we have more leisure than in the past - and live much longer lives.   We have a better education and more time to think.   And many people are starting to think that the empty promises of religions are just that - stories told to keep the plebes in line, so they don't start a revolt and overthrow the power structure in the here-and-now.  The power structure that profits handsomely by making promises of eternal life in the there-and-later.

Myself, I don't buy it.   And it seems to me that many people don't bother to think through how this eternal life deal is supposed to work.   Because it can't.   A life without end is a life without meaning.
Newer Post Older Post Home