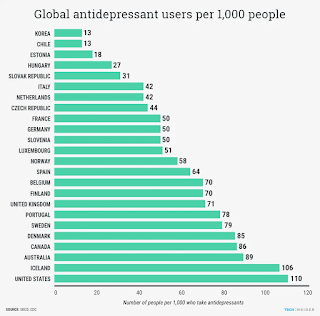 Being content with your station in life and with life itself, is the key to happiness.  People who wonder why they are not happy all the time, are never content.  Shoot for contentment, and happiness will follow.

I listen to a lot of people and read things people write online, and the common denominator seems to be that everyone is unhappy.  No one is content with their station in life, even as they live in the wealthiest country in the world - where the poorest among us are in the top 10% of wealth for the planet.  But to hear them tell it, life is just one bitter disappointment after another, and they got a raw deal in life.  And not surprisingly, we prescribe more anti-depressants than any other.

(Caveat:  Some statistics show Iceland as beating us out as of late.  But then again, if your country has the word "ice" in the name, I think you'd be depressed, too!  But seriously, the chart above illustrates, more than anything, that prosperous Western countries have better healthcare systems and people have more time for naval-gazing than in other parts of the world).

It strikes me as odd, at first, until you think about it.  I was in the convenience store the other day and a young man in his 20's came in with a ziplock bag filled with scratch-off lottery tickets.  Judging from the giant pickup truck he was driving and its contents, he was in some sort of construction work and was making good money - not rich by any means, but solidly middle-class.  He cashed-in a number of those lottery tickers and then bought at least $100 more of them, as well as lotto tickets, etc.  It took fifteen minutes for him to make these transactions, and the line was kind of long behind him.

I thought it was odd, but then I realized that in addition to the compulsive addictive nature of these things, he wasn't happy with his station in life, and dreamed of "winning big" - where he could buy an even bigger and badder pickup truck, a fancy car, a trophy wife, a solid-gold house, and then "kick back" and do nothing for the rest of his life and finally be happy.  But as the book Ten Irrational Ideas pointed out, the idea of "kicking back" is flawed:

Yet a lot of people believe this, and will spend an inordinate amount of money trying to achieve happiness through inertia. I have friends who go on cruises and then just sit on the ship - never going ashore - and getting drunk all day long.  I am not sure why this is better than going to a hotel in Miami and doing the same thing, or indeed, just sitting at home and getting drunk.  But maybe getting drunk all the time isn't a path to happiness.  Maybe that first drink makes you relaxed, but the second, third, or fifth will just make you woozy and tired and feel like shit the next day - so you repeat the process.  Such is the nature of addiction.

Lottery tickets, cruises, or serial trips to Didney-land, it is all the same thing.  Nothing is good enough unless it releases orgasmic pleasure. Merely being content isn't good enough for most folks, and the only alternative to happiness is depression.  So most folks are depressed all the time.

I mentioned before that pain focuses the mind.  And one way it does this is to make one realize that not being in pain all the time is sufficient.  Screw happiness - just get rid of the pain!  And if you are not in pain, feeling well, and in general good health, well, you are doing better than half the people on this planet.  Most people struggle for enough caloric intake for the day to keep their brain alive.  We complain that we are not entertained enough.

Entertainment.  It seems to be a focus of so many peoples' lives.  People devote their lives to television shows, movie franchises, comic book ("graphic novel") franchises, rock stars, reality television, political pundits, conspiracy theories - you-name-it.  Very few people seem to devote their lives to their lives.   It seems we crave constant distraction, and if we don't get it, we'll leave a one-star review on Yelp.  It is the nature of spoiled children.

Contentment comes from realizing that you have all you need and you don't need to crave for more.  Misery comes from borrowing more and more money to have "things" that will make you happy, but usually make you even more miserable over time.   I talked a lot about how borrowing money is time-shifting money - taking away from future you, so you can have something today.  Happiness works the same way.  You borrow money to buy that fancy new car and are happy today (for a very, very brief period, such is the nature of consumer happiness) but pay for it in misery down the road, as the fancy car depreciates and accrues door dings and miles, and yet you still have 69 more payments to make on it.

Owning a shiny new car with 72 months of payments might at first seem like happiness, and for a few days or weeks, maybe you will get that consumer "rush" over owning a shiny thing - as people compliment you on your new car, as if you made it or something.  Contentment is owning a secondhand car outright and not having 72 months of payments to worry about.  Maybe the "rush" isn't there, but there is a sustained level of contentment that lasts a lot longer.

I say this from experience.  Some of the things that made me the most unhappy in life were "things" that I felt I had to own, particularly expensive things that required I borrow money to own, or things that required extensive storage and maintenance costs.  We loved our small boat that we could trailer ourselves.  The big boat that you had to pay $100 to have hauled out of the water was far less satisfying.  The cars I bought used for very little - and paid cash - were the most fun.  The ones I had to pay a lot of money for (and get a car loan for) were far less satisfying.

The crazy thing is, contentment can be had at almost any income level.  The "poor" in this country have a lot of money pass through their hands - most of it goes to pay loan interest. There have been studies galore (caveat: surveys are always suspect!) that claim that people who are desperately poor are very unhappy, but that people who have enough money to get by are generally happy, while folks who are richer than that, are generally unhappy - and get unhappier the wealthier they are.

When I was a technician at Carrier, making the princely sum of $17,000 a year, I had a place to live (eventually a small house) and a car, and enough money to live on back then.  But then I had to screw it all up and buy a brand-new car and suddenly, I was over an economic barrel, paying more in car insurance than I was in car payments. It didn't help any, of course, that I drove like most Americans - speeding everywhere and then blaming the cops for getting tickets.  Everything bad that happened in my life was someone else's fault!

Eventually, I got a little older, and paid-off that car loan and was debt-free for one of the brief periods in my life.  I took a leave of absence from school and finished my degree - riding my bike to school and living off modest savings, as well as my income from working third shift at UPS.  I was content, as I had everything I needed and my life had purpose and direction.

This is a pattern that would repeat, though.  When I moved to Alexandria and met Mark, we were both poor as church mice, by DC standards.  And again, I decided I needed to buy a brand-new car, and once again, got on the hamster-wheel of debt.  I was content, but once I put myself into debt, became uneasy and worried.   Contentment, it seems, is never enough, particularly when you are comparing your life to that of others.

The television is a big part of the problem, to be sure.  When I was "content" finishing my degree, I had pulled the plug on cable TV ($36 a month!  That was enough back then for a week or two of groceries!).  Television tells us that we want a shiny new SUV, or a prescription drug, or a rotary chicken-cooker (or instapot or air fryer or whatever).   Living in the city, I saw other people with fancy cars - but didn't realize that they often had miserable lives.  I wasn't content to have enough, I wanted more.

But the more you want, the less you get, because no matter how much you get, it is never enough.  Money in the bank is security and contentment, but that is usually the first thing sacrificed on the altar of happiness.  How many people do you know, personally, who whine and complain about "living paycheck to paycheck" and tell you this on a message "Sent from my iPhone XXXIV!"  Or the fellow complaining about how the Federal Reserve "took my money away!" and yet has $20,000 in tattoos on his back.(and arms, and legs and neck and.....).

It's the same old deal - we sacrifice contentment for the transitory rush of happiness. And it never ends well.

I am at a point in my life where I am content.  As I noted before, on a good day I wake up, have my coffee, and if I have a good bowel movement, it sets the tone for the rest of the day.  I'm not interested in being ecstatic, but merely not being in pain or discomfort.  I don't want to be rich, I just want to avoid being poor - and avoid going into debt, ever again.   I seek contentment, not ecstasy.

Mark used to marvel at the "old couples" down near Boca Raton, where he went to college.  They would go to the beach every day, carrying a beach bag and a cooler.  They would sit there all day, under their umbrella, and play cards or read books.  They were content to just be with each other and going to the beach cost them nothing.  How could they possibly be content?

Well, as we get older, we start to understand where they are coming from.  I noted before that so many vacation destination places have venues where you spend money, and many tourists will open their wallets because they think that is what they are supposed to do.  If you aren't spending money, you aren't having fun!  It is like rednecks - if an internal combustion engine isn't running somewhere, what's the fun in that?  Jet ski, ATV, or even just a generator, burning fuel is fun!  That, and motion and speed - two things small children delight in.

Maybe there is a lesson in this.  If we seek contentment, we are quite likely to achieve it, and happiness will follow as a matter of course.  If we seek happiness itself, we end up miserable.