Another Day, Another Tot Mom.... 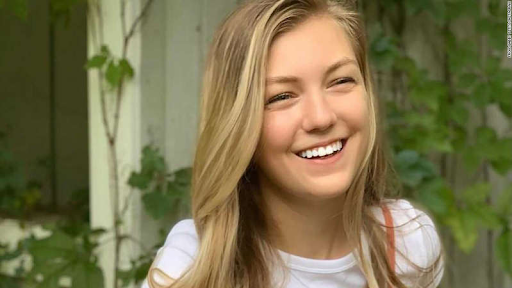 People channel their energies into non-productive and even destructive pastimes.

A reader writes, in response to my posting about anger politics, as to whether there is a better way of channeling that energy.  That was sort of the point of the posting.  The successful people in this world don't get upset by the daily news or politics - they make the daily news and they make the politics.  They focus on their own game, and not on the fru-fru window dressing that distracts small children and cats.

Disconnecting from the 24/7 news cycle is a good way of doing this.  Nothing on the television, other than a tornado alert (and you get those on your phone) is so important that you have to watch it right this very minute.  In fact, you are better off reading about "current events" ten years from now, in a history book, where time puts things in perspective.

I mentioned before how appalled I was that the local bank set up a television in the lobby so the tellers could follow the "Tot Mom" trial on a minute-by-minute basis.  It was almost comical, how these 30-something ladies were so engrossed by it - to the point where they were miscounting the money.  "Well, thanks, but I cashed a check for $100, not $1000!"  Maybe they harbored some fantasy about murdering their own children, I don't know.

I intentionally tried not to find out about the trial as I felt I was being baited.  Some white-trash tragedy played out in a trailer park somewhere, no doubt.  My participation and opinion on the matter was irrelevant, unless I was on the jury - and I wasn't on the jury.  But these ladies at the bank!  They had detailed opinions about forensic evidence.  They should have become pathologists instead of bank tellers!

What got me started on this was I clicked on the MSN news site - always a mistake.  I used to use the MSN app, but I found it seemed to concentrate on sensationalized news.  So I switched to "AP" which stands for "Always Palestinians" - the have a very, very slight anti-Israel bias.   If the Palestinians fire 4,000 rockets into Israel, it is the justified response to the Israeli police trying to quell a riot near a holy site.  But if Israel goes after the rocket-launchers, well, they are a bunch of baby-killers.  I think the truth lies somewhere in between.  But that's the news business for you - it is biased and always has been, so don't believe this nonsense about how we are polarized "today" and politics "today" are worse than in the past.  It ain't so.

One nice thing about AP, though, they don't feel the need to "update" constantly, when there is no real news to report.  Many other news sites have lots of "news" and it changes minute-by-minute.  I can log onto AP and not see anything new, even though I haven't checked it in a couple of days.  Those people are really out of it at AP!

But getting back to MSN, I was kind of appalled by their site - lots of sensationalist news, and many, many articles about a young blond-haired, blue-eyed woman, who was "missing" and now her fiancee has gone missing, too - and they suspect foul play.  Meanwhile, elsewhere in the United States, a dozen prostitutes have been found dead (it happens every day, in every city in the county) and no one gives a shit because they are not blond-haired and blue-eyed and don't have good head-shots for the evening news.

This is not to say I don't care about this poor lady, who was likely murdered and dumped in the Everglades.  But her plight is no different than the dead hookers washing up on the beach in Long Island, other than we don't give a fuck about dead hookers.  Funny thing, that - the dead hookers need better P.R. - tearful backstories and nice photos, preferably in cap-and-gown.  Maybe then, we'd give a shit.  Oh, wait, they're mostly minorities, so we won't.

This isn't the first or the last time the media will go after this bone.  A few years back there was some guy who dumped his wife in the San Francisco bay, and everyone followed that "Tot Mom Trial" with bated breath.  Did he do it or didn't he?  Stay tuned for more courtroom tee-vee!  Then there was the guy who put his wife in an oil drum or something.  Same shit, different day - attractive, youngish people, white, blonde, and that can't happen to one of us, can it?

Someone, somewhere, in the news media made a conscious decision to promote these cases and hype them.  They know they are good for ratings, and what "makes the news" is what is good for ratings.  So no dead hookers (sorry girls!) but lots of dead white middle-class clean-cut kids.  So there are a dozen articles on the MSN page, breathlessly updated us on the latest status of the case of one missing person in a nation of 330 million people, where about 50 people per day are murdered.  Yet this one story will dominate the news cycle for weeks.  They will cover the discovery of the body, the arrest of the perpetrator, the pre-trial hearings, and of course, the trial (which will go on for weeks, if not months) and the eventual acquittal - which will occur only because the media makes such a circus of the whole thing.

In that time period, hundreds, if not thousands, of other people will be killed and no one will care.  Why this case?  Why this woman?  Why is is always a woman?  A blond, attractive woman?  Perhaps the core audience (women) identify with the victim or suspect and thus are drawn into it.  Who knows?  All the networks know is Nielsen ratings, and the ratings on blond middle-class women being killed are boffo.

But that's not the point of this posting.  The media has always been and will always be, like a small child with a toy drum.  Bang! Bang! Bang!  Look at me!  I want attention!  And be sure to watch these 20 SUV commercials! Doncha like "sitting up high?"

The problem isn't the media, it is the brain-dead bank clerks who breathlessly watch this shit and then wonder why their own lives are a personal trainwreck.   They can never seem to get ahead in life.  "No time!" they argue, they are "so busy!"  Too busy to balance the checkbook or do their own laundry or wash the dishes or make their own food. They blow four hours a day following the latest "Tot Mom" controversy and then end up sending out for Pizza.

It isn't the fault of the media, it is the fault of us - the people who follow this crap.  And if it isn't a "Tot Mom" debacle, it could be something else - sports, or a video game, or some other time-waster (blog writing) that the people who pull the levers of our society don't bother to waste their time on.

I remember watching an interview with Katie Couric or some other morning show personality and they were asking them what their day was like.  They have to get up at 4AM, get ready, drive (or be driven) into the city, in makeup by 6, briefed on the day's stories, and into the studio by 8.   It is an exhausting schedule, but of course, they are paid millions a year to do it.  The interviewer asked, "What is your favorite television show" and the morning newshead let slip a boner: "With my busy schedule, I don't have much time to watch television..." Suddenly there are frantic hand-waving motions from the control booth.  Don't let the plebes know you don't watch tee-vee!  They might get ideas!

Too late.  I got ideas.  I turned off the set and thought to myself, the people who make television don't waste their time watching television.  Why am I wasting my time this way?  Being "plugged in" whether it is television or a smart phone - you waste hours every day doing nothing of consequence.  The very wealthy and successful people aren't watching the news, they are making it.  They don't have time for time-wasting fru-fru in their lives.  They don't obsess about politics, they make politics.

And that is the difference.  We plebes have a lot of energy and time on our hands, so we have stupid hobbies which are little more than time-killers.  We build model airplanes - or real ones.  The successful people build airplane companies.  Takes about the same amount of time, too.  We get distracted with trivia and nonsense. Old Joe can tell you all the stats about every quaterback in the NFL and he religiously watches every single game.  The guy who owns the sports team or the million-dollar quarterback has better things to do with his time - or if he does do those things, at least they are profitable to him.

To some extent, this is inevitable.  There has to be an audience - we can't all be stars - and there is nothing wrong with being a plebe - in fact, you should embrace it.  Embrace your mediocrity and be happy about it.  We all can't be chiefs or superstars - someone has to mop the floors.

The surefire way to unhappiness, however, is to cry out that you should be a superstar, by dint of your watching all the Tot Mom trials or obsessing about politics.  The rabid political types are certain that "if only" their party would win, the world would turn into shangri-la and they would become fabulously rich.  It never works out that way.  You can't watch your way to success.  You can only squander your time.

UPDATE:  Kelly's satirical take on it: 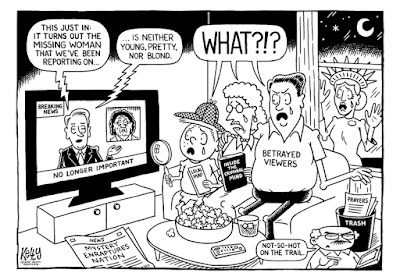 It seems I am not the only one sick and tired of the media playing this game, even the poor girl's Dad has come out and said "enough!" as the attention placed on his daughter by the media isn't solving the crime or prosecuting the perpetrator (but often has the opposite effect).  It also takes away from the numerous people of color who go missing, or people who are just not 5 O'Clock News ready.

We need to stop doing this.  And it begins with you and me.  Stop watching tot mom trials and stop clicking on tot mom news stories!  I made it a point not to click on ANY story related to this recent case.   Besides, all you need to know is in the headlines anyway.....

UPDATE:  It seems the guy killed her and then offed himself, so no show trial!  The network heads were disappointed.  They will have to schedule something else for ratings week!  Never fear, there is always another "Tot Mom" in the making!  Stay Tuned!