Why the Idiot Media is a Waste of Energy and Time 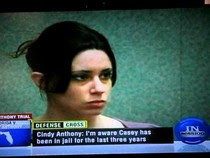 Why would anyone be fascinated by some Trailer-Park drama?
As I noted in a previous post, my bank manager - who is a blonde - has a TeeVee set up in the lobby, so everyone can stay up to date on the latest developments of the Caylee trial!
And every time I go in to make a deposit, the tellers ask me what I think about the trial.  I tell them, "I am not representing either party, and I'm not on the jury, so what should I give a rat's ass?"  And I am not sure what the trial is all about - and I don't want to know, thank you.
But thanks to saturation media, I have this sort of crap thrown in my face every day.  CNN breathlessly covers it on its website - you can't go a day visiting their site for the last year, without seeing at least one headline for "Caylee" or "Tot Mom".
It is like that new genius of American Politics, Ms. Palin.  No, no, not the former Governor of Alaska - but Bristol Palin - whose every word and nuance is talked about in the press.    Some pregnant teenager is worthy of headlines in America today.  What is the obsession America has with trailer trash?
The latest development in the idiot media is - what people have been whispering about for months - that perhaps the former head of the IMF might be innocent of these rape charges brought against him.  As it turns out, the accuser was less than credible, and there are some questions in the timing of her allegations as well as a recorded phone call made to her boyfriend in jail.
Hmmm..... there is a "he said, she said" type of accusation made, and who do we instantly believe?  Guilty, as charged, no trial necessary - the press has already convicted him.  All the major news outlets as much as said so.  The pundits all tsk-tsk about his "fall from grace" and Time magazine runs a cover story on "Why are all men pigs?"
This, of course, plays into the hysterical women demographic that comprises such excellent consumers and over-spenders.  Women who are constantly alarmed and disturbed by the world, and are so quick to forward the latest "Wal-Mart slasher" e-mail.
Men are all rapists, or purse-snatchers.  And if you are some sedentary 350-lb woman waddling from her car to Wal-Mart, well all those men out there are just dying to rape you!  PLEASE FORWARD THIS TO EVERYONE YOU KNOW!  IF IT SAVES EVEN ONE PERSON IT IS WORTH IT!
But, today, we are starting to see that, hey, when you have two people making contrary accusations, maybe it is best to reserve judgment on the matter, rather than jump to conclusions?  Maybe it is all that pesky Lawyer training, but you know, once in a while, a client is actually innocent.
But hey, that would be no fun at all!  Put your head back down in the trough and wolf down another 2,000 calories of media kibble - it is all so yummy and tasty!
But please don't kid yourself that you are "staying informed on the issues of the day!" by watching Court TV, or Fox News, or anything on television.  All it is doing is getting you all riled up to no purpose and no end - and distracting you from the real issues in your life.
Which of course is exactly what the media is trying to do - distract you - provide a gladiatorial event - bread and circuses - to flood your brain with cotton candy and prevent you from taking time out in life to think for a change.
Turn away from the TeeVee and the mass media.   It is the most important step you can take in reclaiming your persona life and your financial life.
If you came to this blog looking for ideas on how to clip coupons, sorry.  That sort of thinking is just exactly what the media hypes ("Extreme Couponing!").  Real financial acumen starts by turning OFF the TeeVee.
You can't watch even a "little" and remain financially astute.
The simplest and easiest way to turn your life around is to stop watching TeeVee.
Newer Post Older Post Home