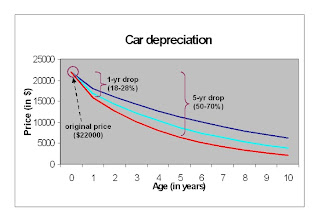 People get confused by the word  "Depreciation " as it is applied in their ordinary lives and as used for taxes.   For most average citizens, depreciation is never applied in the tax sense.


Depreciation has two distinct meanings, in terms of ordinary accounting and in terms of tax law.  And people often get confused by the difference between the two meanings.   What are both meanings of depreciation and why are they different?  Let's discuss this.

To keep it clear, let's call the depreciation that you and I experience as ordinary citizens as "depreciation" with a lower-case "d" and the Depreciation, in the tax sense of a Depreciation Deduction, with an upper-case D.  As we will see, depreciation and Depreciation have nothing in common.   Understanding both concepts can help with financial planning.

For the average Joe, who works at a job, spends his money, owns a house and a car, and has no investment property, the term "depreciation" applies to his assets - usually his car - and how it lowers in value every year.

In this sense of the word, the term means the decrease in value of the car.  It has nothing to do with taxes, accounting, or anything.   But it is important to consider and appreciate (pardon the pun) in terms of personal finances.

For example, understanding the depreciation curve on a new or used car (as shown above) is important in making a buying decision.  Most new cars depreciate in value by 10% or more the minute you drive them off the lot - when they make that magical jump from "new car" to "used car" and drop in value.  And motorized vehicles in general depreciate about half in value every five years or so.

The key word is,  in general.  There are some parts of the depreciation curve that are less steep and where they nearly plateau (but never quite do so).   Thus, a car depreciates rapidly the first day of ownership, then slows down for a few years, drops again after five years, and then drops again after about 10 or so, until they finally level off near the scrap value/basic transportation level - until someday they may become collectable (many, many years in the future)

Also the curve depends on the make and model car.  Cars that depreciate less, such as BMWs and Mercedes still depreciate a lot in value - they just don't hemorrhage in value like some US makes, such as Cadilliacs.

So a car is not an "investment" and buying brand new ones is a sure way to experience the most depreciation.  So this is a valuable concept to understand, as it helps you understand the overall cost of ownership, not just the "monthly payment" - which is all most people think about.

But you can't "depreciate" your car on your taxes, if you aren't running a business, and your loss on the car is not tax deductible - it is just a personal expense.

If you have Investment Property, Depreciation takes a whole new meaning, and here it gets difficult for many people, as they cannot figure out why you are taking a depreciation deduction on a rental apartment building, when it is actually appreciating in value!

I discussed this before, and how you can use the Depreciation Deduction to convert ordinary income to capital gains, perfectly legally (and no, it is not a "loophole" it is the tax code!).

The key to understanding Depreciation in terms of a tax deduction is just to ignore the word itself - call it "Big D" and stop thinking of it in terms of something decreasing in value, because likely, nothing is.

It is like trying to learn Entropy in Thermodynamics.  Stop trying to visualize it and just memorize the damn equation for the exam.  Understanding often gets in the way of understanding, oddly enough.

Simply stated, the code lets you take a certain percentage of the purchase price of an income property and then deduct that from your income every year.  So, for example, I buy a $100,000 apartment building.  The rents cover the mortgage and the utilities, taxes, insurance and repairs.  I Depreciate it by 10% per year (see your tax adviser for more details on actual amounts) and this knocks $10,000 off my income for the year - which means my taxes are lower and in fact, I may be in a lower tax bracket.

Neat trick, huh?  And it is not a "loophole" but designed into the tax code, intentionally.

Of course, when I sell the place, I have to pay taxes on the profit - figured on my reduced basis -  the sales price minus my purchase price, the latter reduced by the amount of depreciation deductions over the years.  When a property is fully depreciated, your basis may be zero, and you have to pay capital gains tax on the entire sales price rather than just the "profit" you made.  This can be scary, particularly if you have a mortgage on the place.

So in effect, I end up paying capital gains tax - later on - when I sell the place, on the amount I deducted from my income.  But that might be at 15% instead of 25% and delayed for years.

And if I flip the property with another one (A Starker Deferred Exchange) I can "rollover" this basis to a new property and avoid paying the capital gains tax until I sell that next property - unless I flip that.

And if I leave that property to my kids in my will, they get it largely tax-free, with a stepped up basis and don't have to pay all that capital gains tax.

Pretty neat, eh?  Now you know why everyone got so over-excited about buying investment properties in the last decade.    And it illustrates why, in the next few years, such opportunities may exist again.

But as you can see, nothing is depreciating - it is just a word, nothing more, and it means something entirely different than the depreciation on your car.

The latter concept illustrates why owning an investment property or two is not a bad idea - if you are a good landlord, are handy with tools, have realistic expectations (no dreamers or weak thinkers!), have a handle on these tax matters, and are willing to take some risks.

You don't need to go to a Real Estate Seminar or buy a "money-making kit!" or anything stupid like that.

But you do have to have good credit, money in the bank, low personal overhead, and low debt.  If you can do without cable TV and leased car payments, sock some money away, and make friends with your local banker, well, THEN, when the right deal comes along, you may be in a position to pounce, and make a lot of dough as a result.

And in the next few years, as the Real Estate market tanks, we may see these opportunities come along.

But for most folks, these opportunities never knock - they are so in debt with credit cards, student loans, car leases, and other junk - and spending money on cable TV, the latest texting plan, the show-off mini-mansion, and take-out or restaurant food, that they are broke and living "paycheck to paycheck" on $100,000 a year or more.

For them, opportunity never knocks, except for the toxic ARM on their mini-mansion, which is a bad bet and a poor investment.

But...... but... if you learn to live without all that crap (that makes you miserable anyway) you can be the guy who is the banker's friend - the one with enough cash for the down payment and the good credit and low overhead to make it work.

And you see where this blog is coming from now.  Because that is, so to speak, how I made a million dollars - by living without crap, driving an older car, and using my income, credit rating, and savings to buy investments that made me money instead of gaudy crap that just cost me money.

And the only time I lost money was when I took my eye off the ball and spent money on personal residences and cars, instead of self-funding investment properties.

Living on less is not just an end in and of itself, it puts you in a better position to do more with your money - to become truly wealthy and succeed in life, instead of just owning crap and being a slave to some job.

But it is a choice, and no, I don't "feel sorry" for those who chose otherwise - to have a new Lexus and look down their nose at me as being "poor" when in fact they are renting from me....