Build Your Own House? 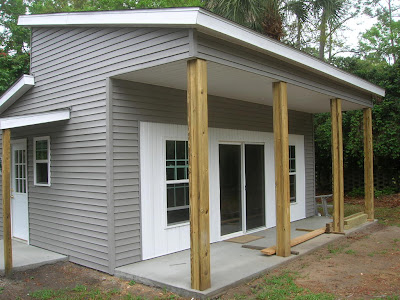 How hard is it to build a house?  If you have basic tool skills, a simple house is not hard to construct.


NOTE:  When I say "build your own house?" in this context, I mean actually constructing one with your own hands.  As we shall see, this is not as impossible as it sounds, for a reasonably-sized structure.  And in fact, in days gone by, if you wanted a house, well, you had to build your own.

Building a house in terms of hiring someone to build it, on the other hand, is a nightmare of expenses, and oftentimes, the resulting house is worth LESS than the market value of the home.   If you are thinking of hiring a contractor to custom-build a home, think carefully about it.

Remodeling is also a path fraught with peril, if you hire people to do the work.    It is often far cheaper to just buy the house you want than to tear apart an existing home and make it into something else.


One reason I have not been writing as much on this blog as I would like to (only 2-3 postings per day, sorry!) is that we are busy building a pottery studio in the back yard.

This studio is basically a miniature house.  It has enough room for 1-2 people to live in, cathedral ceilings, a long porch, room for a bathroom, 70A service, and a small kitchenette.  It was built on a slab of concrete, which took 3 days to form and pour.   The basic frame, from framing, sheathing, roofing, and siding, took an astounding 13 days.  The total cost, including permitting, concrete work, materials, and finishing, was less than $20,000.

That's right, you can build a basic house for a couple of people for about the price of a new car.  So why are houses so expensive?


While the initial "barn raising" went quickly, it did take me several months to finish the interior.  A year later, we screened in the porch.

To begin with, land is expensive - and most folks fail to realize that the cost of land often exceeds the value of the home built on it - or comes close to the cost of "improvements".   As we learned from our home near Washington DC, sometimes the improvements were worth nothing or actually detract from the value.   We sold that house to a developer, as two building lots, for nearly three-quarters of a million dollars.  As a "home" it might have commanded half that much, on a good day.

So why do people pay $100,000 to $1,000,000 for a home?  Well, for starters, most folks want a lot more home than the little cottage we just built.   People want 2-5 bedrooms, if not more, plus a three car garage, a family room, a den, a TeeVee room, an eat-in gourmet kitchen, and, well, whatever else they can think of.  And as a result, most people end up with a lot more house than they actually use.  Most Americans - myself included - have a "guest bedroom" that is used maybe a few times a year, or a "formal living room" that one needs to make excuses to use.

What building this studio taught us is that (a) it ain't hard (technically) to build a house, it is just hard work, and (b) you really don't need a lot of space to live in, when it comes right down to it.

If you really had to, you could live in a very small house - like a park model home.  But for some reason, most of us convince ourselves that we need space, space, and more space, usually to fill up with junk we buy - crap, really - and end up being "house poor" as a result.

This is, frankly, good news to the millions of Americans who are facing retirement - sometimes early retirement - with little or nothing to live on, other than Social Security.  You can live a comfortable and safe life, in a modest home, which is all you really need.   It costs less to heat and cool, the taxes are low, and it is incredibly easy to keep clean and maintain.

Someday, I look forward to living in such a modest house.  Life will be a lot less hassle, then!
Newer Post Older Post Home