You Don't Know How Lucky You Got It! (Putting Your Problems In Perspective) 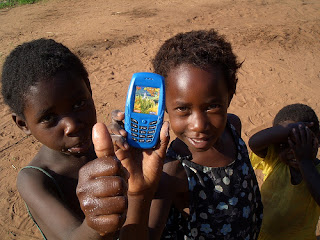 It is a good day for little Arissa and her brother Duante!  They have two bars of service!
People in America don't know how lucky they have it.  The other day, I was talking to a typical American and they were regaling me with the various injustices in their life.  To begin with, they had to wait almost 10 minutes for their Frappe Mocha-Chino Latte Chi Tea with with low-fat whipped cream and caramel extract at the Starbucks - and then the barrista forgot the caramel extract!

You can surely appreciate the injustice of it all.

And then their smart phone wasn't working right.  They could not run any of their "apps" or text their friends while driving their leased car, as they had crummy service.   I mean, they pay $100 a month for an unlimited data and service plan, and there are still dead spots!

I tried to explain to them the plight of African orphans, to put it all in perspective.   They are lucky to get, on any give day, the amount of calories in one Starbucks milkshake "coffee drink" - for the entire day.   And of course, there was that whole horrific business of seeing their parents hacked to death with machetes because they were of the wrong tribe, wrong religion, or just in the way.  And since that day, they've been bounced from one refugee camp to another, aided by American-lead NGOs that pocket millions of dollars in African aide and hand out bags of free rice provided by the USDA.

They can only hope to grow up some day to be child-warriors in some revolutionary movement or to be trafficked as under-aged prostitutes.   Hey, everyone has a dream, right?

But the worst part of it is, well, cell service in Sub-Saharan Africa SUCKS!  These poor kids are lucky to be able to text someone maybe once a week, if that!  And the "app store" they have only has lousy primitive games like tic-tac-toe or Tetris.  You really don't know how bad you have it!

But then my friend told me that sometimes they only have ONE BAR OF SERVICE in the mini-mansion subdivision they live in ("Foreclosure Mews Estates") and I had to agree with them - they have it a lot worse.

Oh the humanity of it all!  The injustice!  Those lucky little African orphans!  If they only knew how good they had it!

Perhaps we should start an exchange program.  We'll send one whiny American to Africa in exchange for one African.  It would be amazing to see how that panned out....
Newer Post Older Post Home