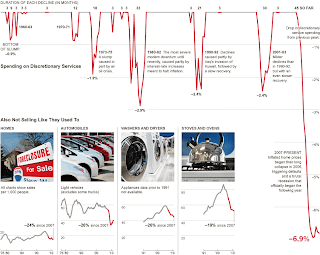 Consumer Spending is way down.   Consumption be done about it?
In the New York Times Sunday opinion section the other day, they gave alarming statistics on consumption in America - it is way down, despite a slow recovery in the economy.  Car sales are down, appliance sales are down, and of course, home sales are down.  What is going on?
What is going on is a shift in demographics, and also the death of the consumer-based economy.  The latter is self-explanatory.   In the 1990's and 2000's, we were told that "consumer confidence" was the most important thing in the world, as our economy was based on consumption.  Consumption was your patriotic duty, and the more you consumed, the better off we all were.
But consumption, by definition, is just using things up.   We cannot become a richer country just by buying more Cadillacs.  And you cannot become personally wealthier by consuming more.  This seems axiomatic, but many people - stupid people and weak thinkers - still believe this today.  You cannot sustain an economy on borrowed money, both on a personal and governmental level, and a massive trade deficit.  Somewhere along the line, you have to produce as much as you consume.  And we weren't doing that.
And people consumed.   Rip out that functional kitchen and put in a showplace with stainless steel appliances and granite counter-tops!  Finance it all with a home-equity loan that won't be paid off until the appliances are long in the junkyard!  Never mind the cost, your home is going up in value!  And these "improvements" will make it worth even more!
All lies, in retrospect.  Spend a dollar on a kitchen, you get back 50 cents.  And the staggering increase in home prices was not real, and the home equity loans were merely spending phantom equity.  And a lot of people will spend the next DECADE paying all this debt off.
Which brings us to the second factor - demographics.  I harp on this a lot, but it is the major engine of our economy and one that is consistently overlooked.  My generation is "tail gunner charlie" - bringing up the rear of the baby-boom, and the largest part of it (birth date, 1960).  Our generation is facing imminent retirement and some are already being involuntarily retired at age 55.  And we have to rely, in general, on retirement savings, and in general, we have all under-saved for retirement.
So what are we all doing?  Trying to save.   And some are trying to "jump start" their savings by trying to beat the market.   You know how that will all pan out - once their Facebook stock goes bust and the price of gold drops to $800 an ounce.
And I know all this because I am part of this generation, and to some extent, I did some of the same stupid things - over-consumed and under-saved - but did it less than most.  But at this stage in my life, I am not keen to spend $30,000 to $50,000 on a new luxury SUV or a boat, or an airplane or a vacation condo, or anything that costs me money, basically.  I would rather go on vacation - I can spend the money if I have it, but I am not locked into a multi-year commitment of expenditures, depreciation, and maintenance costs.
And I have paid off my debts - which a lot of people are doing or trying to do.  Having a high monthly cash-flow requirement is, in retrospect, a very bad idea.   Being able to live an all-cash lifestyle is a good idea, if you can do it.
So, the idea that the housing market will rebound quickly, or that car sales will zoom up, or that people will jump back on the remodeling buy-and-flip bandwagon anytime soon is, well, specious.  Recovery is not "just around the corner" because the old model of Consumption is dead, I think.  And I think the new model - of investment and productivity - will take a long time to come to fruition.
And compounding this problem is that the government will cut back on spending.   Cutting back on welfare and entitlements would do good.  But we need to spend more on jobs that create wealth - to produce more.  And we need more people to fill in the bottom of the age pyramid.
But we are doing the opposite - discouraging immigration and then paying native-born people not to work, while simultaneously cutting spending that could foster employment.    We could be in for a long drought....
Newer Post Older Post Home