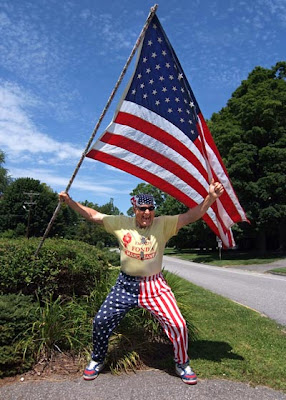 Are political views like fashions, in that we put them on as a styling statement?  I think for many people, the answer is YES.


I had a dream last night.  And yes, I should avoid spicy Thai late at night.  In my dream, I was at the mall.   It was stuffy and smelled like new carpet.  There were all the usual stores - Abercrombie and Aeropostal, of course, and a new store, that had a sign out front that said "Political Fashions!" and people were flocking to get in.

I went in the store and a saleslady came up to me and said, "Can we fit you with some political fashions and the latest stylings?" and before I knew it, she was picking out clothes for me.

"How about this left-wing hippie getup?  Comes with a grey braided pony tail, a 'fight for a living wage' bumper sticker and patchouli stink!  I looked in the mirror and saw someone that was definitely not me.

"Um, that doesn't quite fit right." She said, "How about something more in your income bracket, say, Limousine Liberal?"

"Of course, sometimes a makeover is in order," she continued, "this Neocon outfit was quite popular a few years back - a little dated, but it is marked-down!"

"Or perhaps you'd like some of the latest styles!" she chirped, "Like this tea-partier outfit - complete with hat with teabags attached, and a protest sign with Obama as the joker - or Hitler!  Comes with a free pair of Sarah Palin glasses!"

I started backing away and heading for the door, and she shouted after me, "Security!  Get that one!  He hasn't pledged a political affiliation!  He hasn't adopted a political style!  Nab him before he leaves!"

And then I woke up in a sweat.  Damned Thai food.  That fish sauce is great, but did I have to dump ALL of it on the Larb?

But it got me thinking, a lot of people obsess about politics, and for a lot of people, politics are about as changeable as the clothing they wear.  Many of us adopt the politics of our peer group, and our peer group changes over time.  Our political views are not necessarily deeply held convictions, but more like style statements, and this year, the style-du-jour is..... what?

For example, when I was very young, in grade school, I recall that the teacher held a mock election in class, as Nixon was running against McGovern (what were the Democrats thinking?).  At age 12, of course, most people's political views are not very well formed, if in fact, non-existent.   So, it is not surprising that most of the kids barfed up the political views of their parents - "Nixon's the One!" in the case of the small town I was in.

And many of the kids also voiced the opinion that, "Well, I don't want to vote for a loser, and Nixon looks like he will win!" - which illustrates how children will say things that adults won't even admit they think.  And some people want to be on the "winning team" when they vote.  No, really.

But it was clear to me that most of the kids wanted to be accepted (social grooming, again) and one way to do this was to "join the winning team" and be like everyone else.  There is no profit, in elementary school or high school, in being different.

Of course, as kids get older, they start to form opinions of their own.  Well, they start to change social groups, actually.   In college, it is popular to be liberal - with some exceptions - and many young people adopt very liberal views which they renounce later in life.  When you are 20, it seems logical that the government could make everyone rich, if they just gave money away, or that "poor people" need government help as they can't help being poor.  Or that criminals are really nice people who are, in most cases, wrongly convicted.  Or that corporations are "evil" and all the problems of the planet could be easily solved if, well, gosh-darn-it, everyone would just think like college students!

Young people adopt a number of oddball political views that are not grounded in reality or by experience.   A young person may feel sorry for the criminal class, until they are robbed or assaulted at gunpoint, or their car is stolen or vandalized.  Once you reach age 30 and realize how difficult it is - and how much hard work you have to do - just to get a little bit ahead, you start to have less and less sympathy for the dude who vandalized your car or broke into your home.

And of course, by that age, you have a job (working for the "evil corporation" you denounced in college), live in the suburbs, and are quite part of the establishment - and are somewhat chagrined to realize that most of your neighbors are quite conservative, as is your boss at work.  Suddenly, spouting Marxist nonsense at a cocktail party makes little sense - and in fact it marks you as a weirdo and you end up being shunned - if not losing that promotion at work.  In a way, it is little different than the mock election in the 4th grade.  It doesn't pay to be different on the cul-de-sac anymore than it does in elementary school.

But yet others go beyond mere conforming, and make a hobby out of politics.  In fact, being a political hobbyist is probably the most popular hobby in the USA today.  People spend countless hours listening to or watching Rush Limbaugh, Fox News, Keith Olbermann, or Glenn Beck - and buying and nominally reading their poorly ghost-written tomes.  They obsess about the latest outrages - of the left or the right - and put their entire worldview into a simple black-and-white picture:  Our side is right, the other side is wrong, and if only our side could "take over" the world would be a better place!

And of course, these political obsessions often prevent the obsessive from taking action in their own life to improve their lot.  Why bother trying, when the political situation is preventing them from succeeding?  And so you see a lot of otherwise smart people sacrifice their personal lives on the altar of politics.

The problem with this sort of political fashion is that it rarely reflects real convictions about life.  You listen to enough "talking points" and you barf them up, but in most cases, you have no idea what they really mean.  And while the powers-that-be want to get you all riled up, they are doing so only to advance their own agenda - whether it is for the left or the right.

Oh, sure, they may toss you a political bone now and then - legalizing or making illegal, Gay Marriage, Abortion, Immigration, Marijuana - or whatever topic they can get you to obsess about.  But that is only so that you will not think about more important issues - such as where all the money goes that the government is spending.

Political Fashionistas are never fun to be around, of course.   You try to hold a conversation with them, and all they can do is spout slogans and talking points.  Nothing is up for discussion, only direction.  There is only one right way of thinking, in their viewpoint, and that's the end of the story.

That is, until you meet them 5-10 years later and discover that they've changed their entire political wardrobe....yet again.
Newer Post Older Post Home