What's the Deal with Golf Carts? 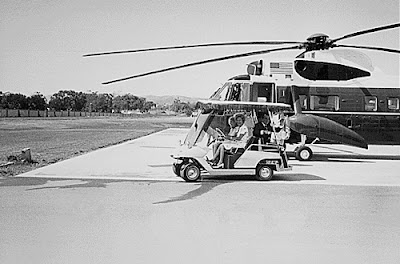 While the Kennedys loved to walk the gravel paths at Camp David, Richard Nixon had them all paved over so he could drive around in a golf cart.  Here, Nixon rides history seat, while Pat drives.   Elvis was also fond of them as well, riding Harley-Davidson 3-wheel golf carts around the grounds of Graceland.  Today, every white trash redneck takes their golf cart with them on vacation - and not to play golf, either!


What is the deal with golf carts?

Here on the island, people come to camp in their RVs, often towing a flat bed trailer - sometimes behind their camper trailer (which is illegal in some States) with one or more golf carts on them.  What's up with that?

Most golf courses have golf cart rentals, so it really isn't cost-effective to bring your own cart.  And in fact, most golf courses, such as the ones here on the island, forbid the use of outside golf carts on the course.

So why do people bring golf carts?  Mostly just to ride around the campground - you know, to avoid all that nasty walking.  Some drive them on the road, which is problematic, as if they are not equipped with a speed kit, they will barely do 20 mph, which is really not safe.   When a car hits a golf cart, guess who wins?

The fascination with golf carts is part of an overall trend away from walking and toward an increasingly sedentary lifestyle.  Sales of golf carts and accessories (to modify your "buggy") are on the rise, as are sales of golf-cart like "four wheelers" which are advertised as being useful for hunting or other "recreational activities."

They are, in short, a car you use to drive to get to your car - for many people.   Sort of an informal automobile for driving around on the lawn.

Are these a good or bad thing?  Bad, I think, for a number of reasons.

First is the expense.  A basic used golf cart will set you back 2-3 grand, but you can pour thousands more into it, buying all the crap from the "buggies unlimited" catalog.  The more powerful off-road 4-wheelers can run $15,000 or more, enough to buy a good used car.  For the miles traveled over their lifetime, these are are extraordinarily expensive vehicles.

Second is the lack of exercise.  Obesity is an epidemic in this country, as is heart disease.   Most of us sit behind a desk all day long, and then use machines to get us to and from work.   And when we aren't in our cars, we "recreate" behind the wheel of a motor boat, jet ski, four-wheeler, motorcycle, snowmobile, or golf cart.  Some recreation.

Frankly, I don't even like using golf carts on golf courses.  Walking nine holes is more exercise than carting 36.  And frankly, I think it speeds up play, particularly if you tend to slice and your partner tends to hook.  After a round of walking the course, you come back exhausted but invigorated.   Your muscles ache and your heart rate is up - these are good things, trust me.

Unfortunately, motorized culture is upon us, and like the television, thrown in our faces in many places and hard to avoid.   You go for a walk in the woods and your commune with nature is interrupted by the buzz of four-wheelers and a "Yeeee-Haw!"   And increasingly, participants in "motorsports" are not just asking permission to drive roughshod all over the place, but indeed are demanding to do so as an inalienable right.

Like I said, Nixon loved his golf carts.   And you might say that his phlebitis made it necessary to use them.  Or you might argue that if he got more exercise, maybe he wouldn't have gotten so many blood clots in his legs.  And let's face it, Elvis surely could have used the exercise.

The people I see here on vacation riding in their carts are usually 300-400 lbs.  Like with the little scooters you see them riding around in Wal-Mart (and yea, they bring those, too) they really could use the exercise.  Of course, after a certain point, you get so fat you can't even walk, so you need the scooter or golf cart to get around.  The upside is, maybe they won't live so long and we'll save a lot of money on Medicare.  But don't count on it.   Medical science is sometimes too good, and obesity medicine seems to be the next big area of growth (pardon the pun).

As a personal choice, I said "no" to golf carts.  If I want to drive to the beach, driving my car is a far more economic and safer choice.  And if I really want to "get the open air" a bike ride is even a better choice - even more economical, and good exercise to boot.
Newer Post Older Post Home