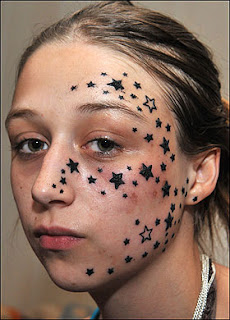 
Tattoos used to be limited to sailors and circus freaks.  Today, everyone is a circus freak - either the bearded lady (cross-dressers) the fat man/fat lady (half the population of the State of Georgia) or the "illustrated man" - kids today competing to see who can have the most tattoos.

So today, looking like a refugee from a circus sideshow is hardly distinguishable - and not surprisingly, circus sideshows are on the decline.  I mean, it is  embarrassing for the "fat lady" to be outclassed by her own audience, or the tattooed man to be outdone by a teenager.

Tattoos are problematic for a number of reasons.   And before you go calling me an old fart who has no sense of humor or adventure, let's look at these reasons carefully, and maybe you will come to the same conclusions as I have.  Tattoos suffer from a number of problems:

1.  The people getting them are usually from the lower socio-economic strata of our country and are thus the ones who can least afford to be spending their meager dollars on tattoos.

2.  They limit job opportunities down the road.  A youthful indiscretion at age 21 can literally mark you for life.  Get a tat and chances are, you won't get a job - except a low-paying job like at the tattoo parlor or the head shop.  Low income then feeds into item #1 above.

3.  They are expensive.   Quality ink work is not cheap, and one reason so many tattoo parlors have sprung up across the nation is that they are pretty profitable businesses.  But the high costs of these unnecessary and permanent markings is borne by the part of the population that can least afford it.

4.  There is some risk of infection, scarring and other problems with tattoos.  No this is not enough reason alone not to get one, just icing on the cake.

5.  While it is technically feasible to get tattoos removed, it is an even more expensive, painful, dangerous, and potentially scarring process.   This is not something to be undertaken lightly.

6.  It is a fad, which is the worst reason to do anything.   The surge in popularity of tattoos is part of the Culture of Belligerence that has thrived in recent years.   Everyone wants to look tough, like an outlaw, a gangster, or whatever.  But for most people, getting a tattoo is not a lifestyle statement (as for an ex-con or a real sailor) so much as it is aping popular culture.  And when you ape, you look like an ape.

People are idiots.  And people who get tattoos, particularly so.  And most of the people getting tattoos and spending hundreds of dollars (if not thousands of dollars) in the process are underfunding their 401(k) or carrying a balance on their credit card, or paying off a car loan, and generally living the debt lifestyle.  Their financial ship is awash all the way to the poop deck, and the only thing they can think of doing is getting more ink done.

The young girl pictured above claims she only wanted "three stars" on her face, and is now suing the tattoo parlor for putting on 56.  The facts of the story seem to indicate otherwise - and the story is typical of people getting tattoos, particularly in visible areas of the body - they have remorse later on.  Facial tattoos are visible to anyone, and are largely permanent.  And they severely limit your employment opportunities.

One might argue that as the number of people with tattoos increases, prejudices against tattooed people will decline.   Perhaps this is so, but I doubt it for the near future.  To begin with, getting a tattoo is still viewed as white trash activity - trailer park mentality at work.  People with no money squandering what little they have.  Yes, some celebrities and athletes get them, but they aren't applying for a job as an Accountant.

A job interview is the one opportunity you have to make a good impression, and a facial tattoo spikes you in the first round.  It tells the interviewer that you have no impulse control, possibly have a drinking or drug problem, and are very, very irresponsible.  In addition, let's face it, tattoos are a bit creepy.  Who wants to look at that shit all day at work?  Not me, I can tell you.

And while I may feign interest in your latest 'tat, let me assure you that it really, deep down, grosses me out.  I'm just trying to be nice, and lately, I'm running low on nice.  But nevertheless, we all have to engage in social grooming, whether it is apes removing nits from each others fur or people pretending to be interested in your latest boring hobby.  So when I say "nice tat!" I am really just faking an orgasm.  Sorry.

Like any other unnecessary expense you have to think long and hard about a tattoo.  If you have disposable income - and by that I mean you are funding your 401(k), paying down or paying off debts, and are well-situated in life - then sure, spend the money.   But most of the folks getting tattoos, it seems, are hardly in that situation.  They squander money on something that makes it harder for them to earn money in the future.

It really makes no freaking sense - to make a style statement.

And style statements are pretty dumb, let's face it.  Wearing your pants around your knees so everyone can see your underwear is the ultimate in idiotic posturing.  But - and this is key - you can always pull your pants up when you go for that job interview.  Tattoos, on the other hand, are largely for life.

I suppose I should mention body piercing which is another unfortunate phenomenon that has taken off in recent years.  While ear piercing was largely on the decline, even among young women (a victim of the clip-on earring), today, kids of both genders have more piercings than those pictures of native Africans we used to see in the National Geographic.  And again, much of these are rather gross (by design, as teenagers love to alarm people and be noticed and they say "What are YOU looking at!") and also very expensive.

And like tattoos, they limit employment opportunities to shitty minimum wage jobs, such as barista at a coffee shop.   Like with marijuana use (which is often concurrent) one wonders if this isn't sort of by design.   After all, what better way to enslave an entire generation than with golden handcuffs of their own making.  One can only hope that if they are removed, the holes left will eventually grow back.

So Joe Slacker decides to get pierced and tattooed and smokes pot.  He fails the urine test at any job that has any hope whatsoever of lifting him out of poverty.  The few jobs that don't require a urine test turn him down due to his freakish appearance.  So he goes from one slacker minimum-wage job to the next, and then argues about the unfairness of it all - how the "system" is stacked against him and how rotten it all is.  But like anything else in our society, he fails to account for his own culpability in his personal mess.  It is a symptom of the Weak Thinking that permeates our society.

It is, of course, a personal choice - just a shitty one.  Classic Weak Thinkers will argue that I am "telling them what to do!" and that that is wrong.  So save the flames.  If you want to get ink done, fine.  But what comes bundled with that tattoo, lock, stock, and barrel, is a life of poverty and want.  And it sucks, long-term, as you will go though life wondering why everyone else (the non-tattooed part of the population) has it "so easy".

And the simple answer is, we put that tattoo money into savings.  And that is how you get wealthy - accumulating money, not squandering it.    And tattoos are just a way to squander money.  It is a simple as that.
Newer Post Older Post Home