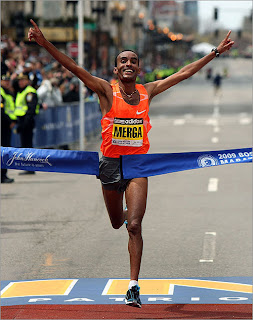 In life, your greatest competitor is....you.


I got an interesting if not slightly incoherent comment regarding a blog entry the other day.   I am not sure I understood it well, but the poster commented about how much "competition" there is in our society, and how difficult this was.

I was a little confused by this comment.   I have never in my life felt I was "competing" at any thing or against anyone.  In fact, in most all cases, my worst opponent was myself.

Perhaps this is because I am not a competitive person - I don't run races or play organized sports.   I am not interested in "winning" against someone else, but winning on my own terms - to enhance my own ends.

And if you think about it, organized sports are sort of ridiculous, in that regard.   You spend a ton of time and effort playing football in high school, and all it does is drag down your grade average and ruin your knees.  The idea you will get a scholarship and or later get paid to play is, of course, a very long shot.  Your reward for playing is the opportunity to "win" - which makes a lot of other people happy, but does little for yourself, except to provide a brief emotional experience.   Oh, yea, they tell you what a great moral challenge it is, and how it is a metaphor for life.  But that is bullshit lies that High School Coaches tell kids. And in College sports, it is even worse, as you are being exploited in a system reminiscent of the old Plantations.

In terms of non-sport metaphors, the greatest obstacles to my goals in life - personal happiness, someone to love, a career, a modest amount of wealth, etc. - were largely my own reluctance to achieve those goals.

It was not that I was competing for admission in college against others.  I've never felt that way.  You apply, and you get in where you are qualified.   And once in College, I never felt I was "competing" against other students - although some other students felt that way, and even resorted to cheating.  25 years later, I can see from the alumni newsletter than the great Karmic wheel has spun around and the cheaters are, well, they aren't Engineers anymore - if they ever were ones.

But perhaps that is one aspect of my chosen field, as opposed to others.   You can't cheat Engineering.  Reality doesn't tolerate fake answers - and your cheating efforts will blow up on the test stand in short order.  So in that field, we do not compete against each other, but compete against nature - reality - which is, really, competition against yourself.

And in the Lawyering business, there is competition - in litigation.   But I don't do litigation, and that is, perhaps, one reason I moved away from it.  But even in litigation, much of it is fact-based.   It is only on television and in novels that Lawyers get their client off by stellar closing arguments.  In reality, this rarely happens.  Most trials are fact-based.  Or you win, due to the ineptness of the other side.  But it is not a competition like in the books and movies.

So how was my greatest competition - and obstacle - in life myself?  Well, I think in a number of ways.

1.  First and foremost, is the temptation to indulge in weak thinking.   We all like to do it - believe in Santa Claus, the 100 mpg carburetor, or something-for-nothing.   And I came from a family of weak thinkers - people who believed that the Government could make everyone rich by handing out money.   Once you start thinking things like that, it is very hard to believe in yourself anymore.

2.  Second is Self-Indulgence.  Granted, laziness can be a good thing - the urge to goof off can be constructive, as you have to structure your life to be able to do so.   But that is not what I am talking about.   Self-Indulgence is the opposite of laziness, as it makes you work harder.   You buy or lease a new car as a "treat" to yourself, and now have to work twice as hard to make car payments.  Or you get a "delivery pizza" because you are "too tired to cook" and are now $20 poorer and a half-pound heavier.  It is hard to avoid the temptation to "have it all now" - but avoiding that is essential if you are to get ahead.

3.  Third is lack of confidence.  And perhaps lack of confidence is not the right words - lack of imagination is perhaps better.  When I was young, things like being wealthy and educated seemed "hard" and something "other people did".  Visualizing myself doing things like that seemed, well, impossible.  But as it turned out, becoming an Engineer was as simple as going to class and studying to be so.   Becoming a Lawyer was as hard as applying to Law School.   These were the biggest obstacles, not the difficulties of taking the LSAT or passing exams.

4.  Fourth is breaking free of your upbringing.  I was raised in a family of drug users and alcoholics and people with severe emotional problems.  When I went out into the world, guess who I was magnetically drawn to?  Yup, more of the same.  So I hung around with pot-smoking friends, thinking this was "normal" and dated mentally ill people thinking they were good choices for a spouse ("I want a girl, just like the girl, that married dear old Dad!").  Realizing that these patterns were self-destructive and a trap was key to breaking free and finding my own life.

There are, perhaps, other factors involved as well.  But the point is, the obstacles to my success were not other people, but myself.  When I applied for a job, I was not worried about not getting a job.  Maybe I would not get a particular job, but I knew I would get one, somewhere.   And this was because I overcame the factors listed above, obtained an education and skill set that was marketable, and then didn't have to worry about "competition" from other candidates.

Today, we have a job market that is aching for qualified candidates - and a workforce that is lacking in them, and cranking out more every year.  Kids go to college these days and major in communications or anthropology or liberal arts and rack up $100,000 in debt, without really having a first clue as to where they are going to work.

And middle-aged office workers fail to realize that they can be replaced down the road, and that their high salaries may become a thing of the past - in a hurry - as they are obsoleted by age 55.  The fail to consider this and fail to save for retirement or retrain for a second career.  And many are sitting at home right now, in their foreclosed mini-mansion, waiting for the unemployment to run out, and wondering how they got there.

And the demon in their lives isn't their boss, or the "evil corporations" or the Wall Street Fat Cats, or Obama  - or whatever nameless, faceless thing or person or group they want to externalize their problems to.   No the problem lies within the human being themselves.  Their own failure to save and their own failure by spending.  Their own failure to see that a job could go away in a heartbeat - and not plan accordingly.

And this is why doing things like dumping cable TV and smartphones and leased cars and all the other trappings of Middle Class Poverty is so, so important.  Until you build your personal wealth, you will always be at the mercy of others - always unprepared for the economic tsunami that will eventually come your way.   And when it does, it is not the fault of the tsunami, but the individual for failing to plan.

Today, I am self-employed.   I do not feel I am in "competition" with anyone - not other Lawyers, not anyone.  And this is a good feeling.   If there is work, fine.  If not, bad.   But there always seems to be work.  But I prepare for the day when I can stop working, because I am lazy and work is hard.  And that is the biggest competition - the biggest race - I have run in my life - the race to age 65 and retirement.  And it is a solo marathon, not a sprint in a pack of others, seeing who can "win" the fastest.

And I think this is true for most people.   If you didn't get a job at a company you interview at, likely it was because someone had better credentials and qualifications than you - a fact-based situation that you have no control over.  And if you both had equal credentials, the person who interviews better gets the job.  And your ability to interview is a personal, internal thing, not something that depends on the other fellow's ability.   You both try to interview the best you can.  You are not competing with each other, but just yourself.  And if you screw up the interview, it was not the "other guy's fault".

Similarly, competition at work is really self-induced.   If you are at a job where there is some sort of silly competition, just stop, take out your resume, and think about moving on.   Because work is hard enough without having to "compete" against some other fool.

But many folks can't do that - they feel that have to compete against others, and in doing so, lose sight of themselves.  The fellow who interviews well is the one not trying to compete but rather the one being himself.  And companies that hire phoneys, well, you don't want to work there, trust me.  Similarly, the person who wins the "competition" in the workplace is the one who does his job well, rather than trying to gauge his success or failure against the work of others.

Failure and setbacks in life may at first appear to be exclusively the result of external forces.   The layoff at the plant may appear to be the "fault" of the company.   But it is within you to find a new job, not sit around and grouse about how "competitive" our society is.  The latter is just loser talk - making an excuse not to even try.  And in the past, that was my biggest single obstacle to success.