What Ever Happened to the Segway? 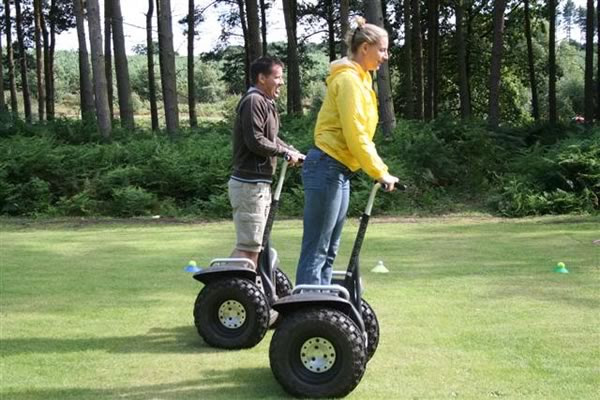 When originally launched, the Segway was hyped as the wave of the future, a game-changer that would alter how cities would be designed, and the greatest invention of the 21st Century - and a few other modest claims.  While an interesting invention, it never lived up to its hype.  Did hype kill the Segway?


Hype is never useful - it obscures basic underlying facts and can deceive people by distracting them from the fundamentals of any transaction.   And this is why car dealers put up signs screaming "rebates!" or "0% financing!" or "free toaster!" or whatever - to distract you from the underlying transaction with hype.

And sometimes hype damages the underlying product as well, and nowhere is this more true that with the Segway Scooter (don't call it a scooter!).

It never lived up to the hype, and in retrospect, of course, it never could.  A fair-weather, low-speed friend, it hardly was a game-changer of anything.  And as an expensive solution to a problem that was not well defined (eliminating all that pesky walking!) it never was a valid economic proposition for anyone.  For the price of a small car or a nice motorscooter or motorcycle, you could buy a machine that would annoy pedestrians and motorists alike, and not really serve much of a useful function.

It may have had some niche applications, but frankly, most people who bought them were looking for uses after the fact.  Police and Postmen were posited as users of these devices, but it was never clear to anyone why rolling around on a scooter was better than walking.  And at the prices involved, it was not cheaper.

And of course, all of this took place in an era where people are walking less and less and need to exercise more.   Too many people are already riding around in little electric scooters - due to staggering obesity.  The Segway seemed to be offering an extension of this trend - promoting a more sedentary lifestyle.

And in terms of functionality, it was just.... well... a scooter.  Granted, a scooter you could stand up on, and one with a cool technical feature (standing on two parallel wheels).  But a scooter, nevertheless.  And you can buy a scooter for less than a $1000.  A nice one, too.

So sales never took off, and in fact, they likely have never made a profit and perhaps never will.   As sales slowly chug along, so do the lawsuits, as people inevitably fall off these things (which seems to be a problem, with even Presidents falling on their faces).

From the Wikipedia entry cited above:

Critics point to Segway Inc's silence over its financial performance as an indication that the company is still not profitable, as about US$100 million was spent developing the Segway.[27]

The company was sold to a group of British venture capitalists, and the new head of the company made headlines by accidentally driving his Segway off a cliff. That sort of put the coffin nail in the Segway, in most people's minds (why he rode it all the way down and just didn't jump off is anyone's guess. But the bottom line is, if he was walking that day, he would still be alive).

Would less hype have helped the Segway?  Perhaps.   A lot of interest and early sales were generated from the hype, no doubt.  But the marketing efforts, including secret code names, the unnecessary secrecy,  and the big unveiling, ended up backfiring, as everyone said, "THIS is the vaunted Ginger or IT thingie?  A Scooter?"

In fact, at the time, before the big unveil, many of us saw Kaman's scooter Patent and dismissed it as a possible "Ginger" candidate - after all, the hype was such that a mere two-wheeled scooter could not be the vaunted "IT" everyone was talking about.

So, almost from the beginning, the laughter started - people snickered and made jokes about Segways, because it was a joke - and the joke was the hype that made this thing sound like something greater than the moon landing, when it was far less.

Not nothing, just less than what they hyped it as.   And in retrospect, even the inventor admitted that the hype campaign was ill-advised.

Segway will still soldier on, for at least a while.   The stair-climbing wheelchair, from which it was derived, has ceased production - a victim of the Americans with Disabilities Act (which provides cutouts, ramps, and elevators nearly everywhere) and the cheap scooters from "the scooter store".   Whether the Segway follows suit remains to be seen.

They offer "Segway Tours" here on the Island, driving Segways down the bike paths.  Perhaps I will try one to see what all the fuss is about - but I can ride these same paths on my bicycle and get more exercise.  Of course, one annoying feature of the Segway is that when people turn them 180 degrees on our gravel bike paths, they leave circular divots in the gravel and churn up the carefully packed surface.

In other words, they are annoying as all get out and damage the paths.

My guess is that it is only a matter of time before they pull the plug on the Segway.  Perhaps a year or two, maybe more.  But if it doesn't make money, there is little point in making it.

UPDATE:  In a moment of irony, a Chinese company that had been making Segway knock-offs, ended up buying the company.   Maybe with lower prices, these things will sell.   But frankly, I don't see myself buying one, even if they were just $200.   It really has no used in my life that a bicycle doesn't do better.
Newer Post Older Post Home