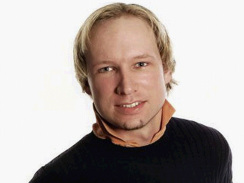 SWM, lives with Mom, no girlfriend, Blond Hair, Blue eyes, Uniform Fetish, seeks same for fun times.
OK, some people have been hinting at it, but I'll come right out and say it.   The jerk pictured above is a closeted homosexual.  And I hope he reads this and gets all infuriated.  But he knows deep down it is true - every night he beats off in jail and thinks about men in uniforms with shiny leather boots.
And speaking of jail, he has 21 years to look forward to of gay prison sex.  Sometimes I wonder if most criminals aren't in fact closet cases, and use criminality as an excuse to spend time in what amounts to an all-expenses-paid gay sex club.  Sure, they all say they do it in prison because "they have no other choice".  But it is funny, as homosexuality has become more acceptable in society, the crime rate has actually dropped - except among social groups where homosexuality is taboo.  This might explain why there are more African Americans (Baptists) in jail as well as Italian-Americans (Catholics) in the mob.
Scratch a fundamentalist (Christian, Jew, Islamic) or a right-wing nut-job and you get a closet case - every single time.  They resort to extreme religious beliefs as a "cover" and hopefully a cure for their own sexual identity crises.  And funny thing, too, oftentimes, these "religious" nuts are not formally affiliated with any real church.  Our pal above had no formal church affiliation - but claimed to be a Christian Fundamentalist.  Go figure.
And as I noted in the Gay Nazi Conundrum, history bears me out.  The history of right-wing and neofacist movements is marked by the outing of closeted gay men - the "wide stance" wing of the Republican Party, for example.  Some of the best Nazis were Gay - until they faced a firing squad or a death camp, of course.  The hysterical anti-communist movement of the 1950's was chock full of closet Queers - looking for a commie in every closet, so no one would look in theirs.
The fellow shown above just looks gay, frankly.  His photo looks like a head shot from any one of a number of online sex sites. Sorry, but straight men just don't look like that.  Too....metrosexual.  The bad hair gives it away that he is a closet case, of course.
And of course, no girlfriend - he's "waiting for the right one to come along."  Well, other than his dear old Mom, with whom he lived.  Oh, yea, he had a "farm", but also two apartments where he and his Mother lived and where he spent a lot of time (you can see why he was so upset at the Islamics - he only had a farm and two apartments - talk about economic repression!).
So, a loner, stay-at-home kind of guy who is overly attached to his Mother and spends a lot of time on right-wing political and religious theories - this is a no-brainer to me.   Closet case, period.
But this is not an attack on closet cases, but merely the sort of political thought that tries to shame or criminalize homosexuality.  The religious right wants to paint gays as evil and bad.   The political right would just assume outlaw it (while retaining their own closeted perks).  What this serves to do to people is make them schizophrenic.
And I think this is another reason a lot of young people "go off the rails" in their teen years and early 20's.   Their sexual urges and feelings are in conflict with their religious upbringing, the expectations of their parents, and of course, the "viper pit" that is high school (where even today, kids are bullied, beaten, and abused for being gay).
So, what does a young man do?  Turn to extreme politics or religion as both cover and salvation.  If only the world could be completely re-made, everything will be perfect!  But of course, the world is never completely re-made.  And of course, it turns out that the Nazi leader is caught in bed with boys, or the famous communist hunter dies of AIDS, or the Republican "family values" Senator is arrested in a public restroom or the right-wing congressman is arrested for soliciting a male prostitute.
Think about it sometime.  Why are there no women at Klan meetings?  Why does a meeting of Aryan Nations look a lot like Bearapalooza at Roy's Hideaway?   Heck, they even wear similar uniforms!
And yea, the two guys who bombed Oklahoma City were probably also closet cases, too.
What does this have to do with personal finances?  Simple.   It is far easier to come to grips with your sexual urges and just accept them, than to go insane and spend all your free time on right-wing websites or giving all your money to hateful religions.   There is no personal profit in obsessing about politics, whatsoever.
Just come out of the closet, already.  Sheesh!
UPDATE:  July 29, 2011
My suspicions are apparently true.  Not a ladies man and seen dancing at a Gay Pride Festival - but later renouncing that.  It sounds to me like he had a lot of "issues" with his sexuality.  While the photo is discussed online, I have yet to see it produced anywhere.
Sorry, but here's the 411 on being a Straight Man, for those of you in the closet, trying to "pass":

1.  Don't obsess about your appearance.   Straight guys don't give a damn.
2.  Plastic surgery is out, period, unless you were deformed in a bike accident or the war.
3.  No makeup.   Ever, ever, ever!
4.  Getting professional "head shot photos"? - Uh, No.
5.  Hair Salon?  No.  Never.  Real men go to Barber shops.
6.  Dancing at the Gay Pride Festival?  Only with your girlfriend, if you think it will make her think you are progressive and you will get laid as a result.  Even then, this is suspect.
7.  Working out in the Gym:  This can be tricky.   The guys who end up admiring themselves in the mirror a lot end up, well, falling in love with their own bodies and then looking for the same as a lover.  Obsessing about the gym is problematic.  Real men, of course, work in construction or other manly pursuits (e.g., Lumberjack) and don't need no sissy gym to become "ripped".

Remember:  It is a thin line between Charles Nelson Reilly and Rock Hudson.   If you are going to make this work, you have to pay attention!
This idiot from Norway failed at every level.  His profile screams "closet case" 100%.  It is very sad that someone can't just come to grips with who they are.   But I've seen this a lot - men who obsess about religion or politics as a means of "covering up" or distracting themselves from their own internal demons.  It never ends well.  In fact, it often ends badly.
Of course, real Straight men (if they indeed exist) rarely obsess about their sexuality, either.  Which is the 100% sure way to know if someone is straight or not.....
"There is no Dark Man" -- Quentin Crisp.
Newer Post Older Post Home