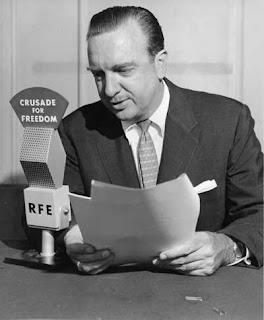 A lot has changed in the news biz since Uncle Walter's day - and most people don't even realize it.

In the old days, the News Departments decided what was news and then told us what was news.  Perhaps this was a bit of a dictatorial model, and perhaps it was subject to abuse.  But what was deemed worthy of the front page was perhaps the more important issues of the day.

And yes, there were abuses - celebrity trials were headline-grabbers even back in the 1920's.  But there was some aspect of restraint back then, probably because the technology didn't exist to see what really sold newspapers and drove ratings.

Today, the TeeVee, as was explained to me by one Cable executive, is all about "selling eyeballs" - the idea is to get you to watch.  What?  They don't care.  So long as you watch and sit through 15 minutes of commercials for every 15 minutes of programming, they make money.  And this is why nearly half the ads on TeeVee are for more TeeVee.  Television has to sell itself to you, to make it seem more important than it is.

So, wedged between the SUV lease offers and Payday Loan ads are ads for shows "coming up tonight!" or later in the week.  They need you, and they need you to watch.

TeeVee news is the worst at this - and this has spilled over to other formats as well.   What is considered "News" is what you want to hear, not what is newsworthy.

So Donald Trump and Sarah Palin are continual headline-grabbers on the TeeVee, even though the former is not a serious candidate, and the latter plays a cat-and-mouse game of pretending to be one.  The more serious candidates don't get much press - they are not as "interesting" - flamboyant or distracting - as the Trumps and Palins of the world.

Funny thing, I was asked once to become a Nielsen family once.  They sent me a letter and then a "log book" and I was supposed to log all the TeeVee I watched for a week.  If I consciously filled out the book with all my viewing habits and send it in on time, I would be fitted with a Nielsen box, which would then monitor all my TeeVee viewing habits.

I wonder how many Nielsen boxes there are in households where there is little or no TeeVee viewing?  Just a thought.  I suspect little to none.

Well, needless to say, I was not exactly enthusiastic about filling out the little book, and the Nielsen people chastised me for not being a good little TeeVee watcher and not taking this seriously enough.  After all, I left one whole day blank - and no one can go a whole day without watching TeeVee, right?  The idea of "TV shows watched: NONE" doesn't register on their Richter scale.

So who ends up as a Nielsen family?  People who desperately want to be one - and that is self-filtering your sample base, which results in bad data.   It is like people who join focus groups - people with a lot of time on their hands and nothing else to do - sure winners in picking your next car design.  "The new Pontiac Aztec!  The car designed by slackers, bored housewives, and retired people!"  - What's not to like?

So, if you are paying for ad time on TeeVee based on Nielsen ratings, you are getting ripped off, in my opinion, because a less scientific arrangement of audience sampling, I cannot imagine.

But that is the problem - the TeeVee now panders to the ratings, and if the ratings show that anything with "Palin" in it gets ratings, then anything having to do with Palin gets on the air.

The Internet is arguably worse, as they can count clicks and see what people like - and even what YOU like.  Today, they can tailor a website to your interests.  You click on "Palin" and you will get more and more of it, until you might be excused for thinking she is President of the US.

And that is why, as I noted in my previous posting, that this silly "Tot Mom" trial gets a lot of headlines - people like that sort of slowing-down-at-the-scene-of-a-gory-SUV-accident kind of story, and so they watch.  And since they watch, the media gives you more and more of it.

So, while I harp on the media, the real fault, to some extent, rests with us.

And this is why it is important to unplug from as much of this crap as possible, and triage the rest.  Becoming obsessed over a trial really isn't "keeping up with current events!"  Celebrity news isn't news at all, but carefully choreographed press releases.  Much of what is "in the news" isn't really newsworthy at all.

And let's face it, today's "Gripping issues of the day!" will all but be forgotten within a news cycle.  If you don't keep up on the latest "controversy", don't worry about it.  Your brain-dead friends who watch TeeVee will have forgotten about it in a week - which is the same as not having known about it in the first place!

So much of understanding how the world really works isn't to be found in the "latest developments!"   - sound bites and breaking stories are not conducive to understanding our budget problems, environmental problems, and international relations.  All of these things are long-term developments that often have roots going back decades, if not centuries.  And yet, the media wants you to think that what happened today is more important, when really it is the other way around.

But the media isn't about to give you the long-format back-story.  So just shut it off.   It adds nothing to your life but distraction and validates some very poor personal financial habits.
Newer Post Older Post Home