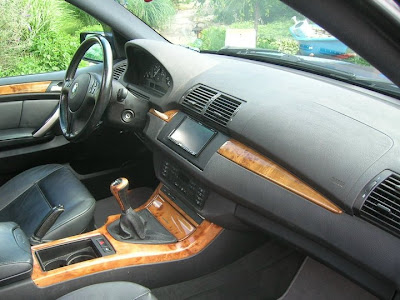 This Pioneer AVIC Z2 GPS/Stereo/DVD player cost me nothing.  And it has worked very, very well.
Yes, the X5 has a 5-speed.  Automatics suck.
I recently installed a Pioneer Avic Z2 in my 2002 BMW X5.   I bought this unit for $480 used on eBay.  that is not a lot of money.  But better yet, I took out the five modules that came with this car (navigation CD player, radio module, Display headend, CD collection and case) and sold them on eBay for $520.  So, in effect, not only was this free, it actually paid me $40.  Of course, I spend $40 on wire and solder.

Installing this in a BMW is not easy - given BMW's proprietary DSP electrical architecture.  However, I am am an Electrical Engineer, so I have God-like powers.   Actually not.   Defeating the DSP system was pathetically easy - if you have the wiring diagram from the Bentley manual, which you should have before attempting this.

For a regular car, it is even easier - four speaker outputs, a power and a ground.  How hard is that?   There is an interface to the anti-lock brake system (for wheel rotation counting) but I never used that and the system works fine without it, once I hit "recalibrate" on it.

I have had this unit for about a year now, and it is so much better than the original BMW Navigation system, and even better than the newer BMW navigation systems (which have tape decks if you can believe that!).  In addition to a DVD player (which can play while you are driving, if you defeat the safety overrides - not recommended, of course!) it has a superior nav system and a built in hard drive which will "rip" CDs when you play them, so it is like having a built-in iPod.

And speaking of iPod, it came with an iPod interface (an option) so I can plug in my iPod or Nano and play songs through that as well.   But wait, there's more!  It has a bluetooth interface so I can plug in my phone.  BMW offers a cellphone interface, but it is an option - and an expensive one at that.

Better yet, I was able to find, online, a interface for the steering wheel controls, so I can use those to select input source, volume, and track.

I did lose the ability to reset the display on the odometer which displays miles-per-gallon and the time.  A small loss, however, given the advantages of the system.

I was able to retain the stock Harman-Karman amplifier and speakers, so it was a pretty easy install.  And it sounds better than the stock system, in my opinion.

The system had a users manual I was able to download, online, which was 300 pages long.   I took this, and the installation manual (very thorough) and put them all in a big honking binder.   Learning how to use the system took some time, but with a day, I was navigating with it and using it, and within a month, I had most features figured out.

If you want a built-in GPS system and media center in your car, and the manufacturer wants a ton of money for this option, I would explore a Pioneer unit like this.   If you can find one used on eBay, of course, it can be a stellar deal (I paid less than 1/3 the retail price, and as I noted, it ended up costing me nothing).

Frankly, I am not sure I would opt for a factory navigation system ever again.  An add-on Garmin or Tom-Tom is far cheaper and easier to update.  And a Pioneer unit like this can be had for not a lot of money, either.

Of course, installing one does require you to know that red is positive and black is negative.  If you have no clue about that, I would not attempt it...
Newer Post Older Post Home