Fear and Paranoia on the Internet 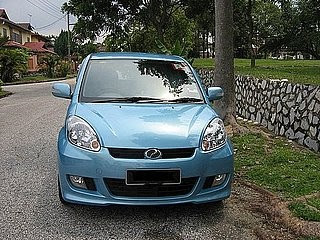 This blogger in the UK uploaded a photo of their car, but blurred out the license number out of fear.  Why are people afraid like this?

You see it all the time on the Internet - people upload photos of their cars, but blur out the license plate number "for security reasons".  This is nothing but fear and paranoia, not to mention a cargo-cult mentality.

You see, when a major news organization publishes a photo of a street scene, they may blur out the license plate numbers of cars for privacy concerns.   For example, you show a photo of a strip club, and there is Uncle Earl's Cadillac right up front there, with his license plate "EARL 69" for everyone to see.   The news organization blurs this out so that Earl won't sue them for invading his privacy.  Granted, it is still a long shot, a Earl's expectation of privacy of where he parks his car is somewhat a thin reed.   But the idea is to avoid trouble, and large media conglomerates are juicy targets (deep pockets) for opportunistic lawyers.

Your average schmuck citizen, seeing blurred or obscured license plates online, follows this practice with their own car photos, in a monkey-see, monkey-do technique - like primitives in a cargo cult trying to mimic the actions of technology they don't understand.

When you ask them why they do it, they say "Identity Theft!  Someone might steal my identity if they know my license number!"

From the first perspective, imagine the "identity thief" has obtained your car license number from a photo you uploaded on Facebook.   He goes to the bank the next day and asks to speak to the manager.  "I would like to obtain a credit card" he says.  The bank manager says, "Fine, we just need your driver's license or other form of ID, your Social Security number, and for you to fill out this form."

"Well, there is one problem," the identity thief replies, "I don't know my own name, address, or Social Security number.  I have no ID.  But I do know my car license plate number!"

As you might imagine, the bank manager would toss his ass out on the street and assume he was dealing with an insane man.    You can't run a credit check on someone without their Social Security Number at the very least.  And a car license plate?  Nothing.   Nada.   Zip.

From the second perspective, even assuming that identity thieves could somehow use your car license number for any purpose, there is little point in obscuring it on the Internet, as it is visible to thousands of people every day when you drive in a big city.   If there really was such a "risk" of identity theft (or risk of anything) you would be at risk for it whenever you drove your car.

Simply stated, all anyone would have to do is walk down the street and write down license numbers.  But people don't do that.  Why?

BECAUSE LICENSE PLATE NUMBERS OF CARS ARE MEANINGLESS AND WORTHLESS, PERIOD!!!

So why do people blur out their license plate numbers on their internet car photos?  Because most people are IDIOTS and live in paranoid fear, stoked by the TeeVee, that at any moment, what few precious possessions they own are going to be snatched away from them for good.

So they blur out their license plate numbers, but when they get a phone call from a stranger asking for their credit card number, they blurt it out over the phone.  And then they are "victims of identity theft" and wonder why.

Must have been that darn license plate number!

As I noted in the past, Fear is a very useless emotion.  It can alert you to danger, but in most cases, it simply masks danger and leaves the victim paralyzed.  And the TeeVee and the powers-that-be want you to be afraid - to live in fear - all the time, as it makes a lot of money for them.   If they can snooker you into paying $29.95 a month for "Credit Protector" they win.  Period.

Snopes often comments about the Urban Legends that circulate the Internet, and one as aspect of the stories people like to tell is that folks want to act like they have the inside knowledge - the secret handshake, so to speak - so they can regale their friends about "a certain little tip" and make themselves feel superior or better.  It is a form of status-seeking.

And you see this with the blurred license plate people - they blank out their license plates on their online photos, because they are "in the know" and smart - after all, that is how sophisticated people do things, right?

But to me, as an Attorney, I see the opposite - I see hillbillies thinking they are smart, but in actuality are advertising their ignorance.    They are in effect, broadcasting how dumb they are - by doing something and not understanding why, or even taking a few seconds to even think about it.

And what compounds this is that many of these same people put things on the Internet for everyone to see that could be sensitive information.  For example, advertising on Facebook that you are going away for a month-long holiday.  Why not just put the welcome mat out for burglars?  Or putting up photos of your young children in swimwear, underwear, or other states of undress?  Why not just say "Pedophiles Welcome!" on your Facebook page?  Some folks put all this and more on Web Pages ("The Smith Family Home Page") where every detail of their private lives is up there on the screen.

Every detail but the license number of their car, of course!

Oh, but it does.  In the big picture, cranking up fear and paranoia causes real harm - to society as a whole, and in your personal life.

Being careful and taking precautions makes sense, of course.   But unnecessary fear is just idiotic.  It is like those "Walmart slasher" e-mails that lonely secretaries like to mass-forward - or fake "missing child" pleas.  "It if saves only one person, it is worth it!  Mass-forward this to everyone on your mailing list!!!"

But instead of protecting us, these sort of paranoid e-mails, rumors, and urban legends just make us all scared.  And scared cattle can stampede - off the edge of a cliff, or to the jailhouse to lynch an innocent man.  No good ever comes of fear.

It degrades our society as a whole - to the point where people are living in paranoid fear of the wal-mart slasher and then stop talking to strangers - or indeed, even friends - as they view the world as a scary, dangerous place that at any moment, is going to blow up in their face.

And what this does is obscure what real dangers there are out there, and numb you to real danger perception.    Once you live in fear like this, imagined dangers are magnified to colossal proportions, and real dangers appear trivial.

Thus, for example, you are in far greater danger of losing your life's savings to the slow "death of a thousand cuts" by spending more than you should, particularly on stupid things like credit protector or low-deductible insurance - both products sold on FEAR and fear alone.  The fear merchants make money, and you bleed just a little more.  They stab you, and you give them your blubbering thanks - because at least you haven't fallen victim to the Wal-Mart slasher!

Getting ahead financially is all about perceiving real risks in your own life - and not imagined or inflated ones.  And yet, as I noted earlier, most folks live in paranoid fear of car repairs (and buy an extended warranty) or a dented fender (and buy low-deductible collision) or a broken window (and buy low-deductible homeowners insurance) but fail to insure their liabilities.

What you really should be afraid of is not what could happen to your car, but what will happen to you if you spend every last penny you make on "what if" scenarios, and end up poor and destitute in old age.

Avoid living in fear.   Not only is it no fun at all, it is not a very economically sound proposition!