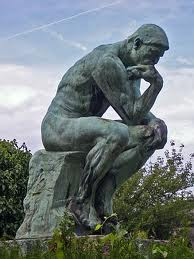 Thinking is hard work, which is why most people don't like to do it.


Most people don't think today - they simply adopt an off-the-shelf answer they get from the TeeVee.  Analyzing raw data is harder to do, but it often yields better answers.

I had an epiphany last night.  I was talking to someone who was spitting up, intact, talking points they heard on Fox News.  They had opinions, all right, but they were someone Else's opinions.  They had not so much thought about the topic at hand, researched it, and come to a conclusion, as listened to someone Else's argument and went "ditto".

And speaking of "ditto" the most obvious example of this is the dittohead phenomenon - people who are willing to adopt Rush Limbaugh's opinions wholesale, without doing much thinking on their own.

But the concept extends further than this.  Timeshare sales, for example, use this type of "thinking" - they sell you an opinion on timeshares without your really thinking, researching, and coming to your independent conclusions.  Infomercials work the same way - they present one-sided data and let you reach a "conclusion" that is preordained.

Analyzing raw data on your own is a much better way to form an opinion, and this raw data could be anything from your personal experience to research you do online or at the library.

For example, during the Real Estate crises, many folks simply repeated the mantras of the industry and their friends (and what was on TeeVee) and thought "this market will go up forever and I'm going to make money!"

But simple research into the history of other market bubbles (such as in 1989) might indicate otherwise.  More research into the average salary of the average American might tell you that houses were going up to the point where no one could afford them.  Basic raw data like this, cranked into the logic engine of the human brain would output one inescapable conclusion - the market was going to blow up and blow up big time.

I came to this conclusion and sold out.  Others said I was a fool - after all, everyone was saying the market would go up and up!  And still others said that selling out would actually cause the market to crash - and that people like me, who got out of the market were the cause of the crash!  If only we had more faith!

Ahhh.... faith, that old bugaboo.  Faith, as I have noted before, is a fine and wonderful thing, but something that defies logic, explanation, or analysis.  You take Faith on faith, not through logical analysis.  In fact, Faith evaporates like so much ether when subjected to reason.  Faith is a fine and wonderful thing if it comforts you about death and life and intangible things. Faith is a poor resource for investing or finances, or indeed, any earthly endeavor.

The Epiphany I had last night was that all of the stuff I have been trying to say in this blog gets down to analyzing raw data.  The problem most people have with finances is, like the girl in Engineering class who wanted to cheat on the exam by memorizing the answers, most folks just want to cut to the chase.  And the "correct answer" often ends up not being illuminating - or in fact ends up being obsolete over time, when they change the test.  On the other hand, once you learn to crank the numbers and draw correct conclusions from raw data, you can always (or usually) come to a correct or better answer.

And I guess in this blog, that is what I am getting at - learning to think financially - which is something I am trying to learn myself.  And throughout my life, I was not doing this.  I listened to the siren song of commerce and friends and the television, which told me answers that were not "correct" for my particular point in life.  So I consumed instead of saved, and the results were rather predicable - to someone who could consume raw data and process it.

But to someone just taking easy answers from the media, the horrific outcomes are always mystifying.  And we see this all the time in the media - the deer-in-the-headlights over-mortgaged mini-mansion owner who cannot understand how he got to where he is today.  How could it all go so horribly wrong?  It must be the fault of someone else - after all, they did everything "right" according to the media.

Learn how to think financially.  Turn away from pat, easy answers and quick solutions.   Stop believing in something-for-nothing and that spending equates to wealth.  Research and accumulate raw data - and learn to process it.   And question your answers and constantly subject them to more rigorous testing and analysis.  Be prepared to abandon answers that are incorrect or are obsolete.  The more you do this, the better off you are.   The answers you come up with will be your lodestone - your guiding star - that will never steer you wrong.


UPDATE 2020:  This is exactly why I say, time and time again, that I am not an advice column, nor do I give "advice".   People do write to me asking for answers to their financial problems.   Oddly enough, usually they already have answers, but just want me to validate them.  The problem with "advice" in addition to not forcing you to research raw data and come to your own conclusions, is that the advice-giver doesn't have access to all the raw data.   When people ask for advice, they often present only selected, cherry-picked data, which would lead the advice-giver to a preordained answer (that the advice-seeker wanted in the first place).

I saw this all the time in my law practice.  People give me select data, and when I pick at the edges and bring up other relevant "raw data" they get impatient.  "That's not important," they say, "the main thing is..."

In other words, they want me to validate a decision they have already made - a bad decision they deep-down know is bad - that was made by ignoring raw data in favor of a pre-ordained conclusion.

And the conclusion is usually something that is convenient to them like "leasing a new car to free up your cash flow!"
Newer Post Older Post Home