Car Sales Take Off - Bad TIme to Buy A Car! 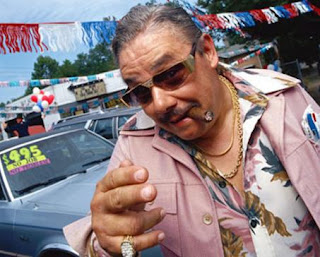 Car sales are often cyclical, and when everyone gets into a BUY mode, well, no bargains will be found!
In the last month or so, it seems everyone is buying a car.   Why is this?

1.  The recession really is over:  No, really.  Yea, the Republicans want to make things seem worse than they are, because, well, that is how you get elected (how patriotic).  And yea, a lot of people are still out of work.   But the economy is growing, albeit slowly, and unemployment is slowly dropping.   We haven't hit the bottom of the housing market, but we're damn close.  Things will get better.   They always do.  Always.

2.  A lot of people had put off buying a car:  During the last two years, it has been nothing but bad news - and as a result, people are nervous and consuming less.  So a lot of folks put off buying a car, figuring (rightly) that it would be a good idea to drive the wheels off the car they have rather than buy a new one.

3.  Leasing dropped dramatically in 2008-2011:  The carmakers had started to discourage leasing by offering "lease-to-buy" programs, where when you turned in your old car, they would encourage you to BUY the next one.  The used car market was getting flooded with 3-year-old used cars (a good bargain for the rest of us).  But the new programs, combined with a lot of scared consumers (and no credit available!) meant that leases dropped dramatically.  What this means TODAY is that there is a shortage of used cars for sale - no, really!

4.  Buy American:  Yea, some folks really think they will save America by buying a Chevy Cruz.  But it employs as many Americans as a Toyota Tundra, the latter having more "American" content than many Chevies.  But it is sending a lot of people the GM, Ford, and Chrysler showroooms, to be sure.

And the auto business can be like this - everyone shying away from buying one minute, then flooding into the showrooms the next.  And as a result, one month you can see  rebates and 0% financing and lease deals and all sorts of price reductions, and within a few months it's "Take it or leave it, I have three buyers for this car right now, so piss off!"

What does this mean for you, the consumer?  Well, as always, it pays to hang onto your car, unless you really need a newer one.  Most of us get car anxiety at one time or another.   Yea, the old car is going OK with 100,000 miles on it.   But suppose the transmission goes out on it?  You'd wish you sold it earlier for sure!

But unless you know the transmission is going bad (and then, are you going to sell it to someone knowing that?  I wouldn't!) this really is little more than speculation.  And moreover, it often is boostrapping emotional decision making.

You drive by the new car showroom and see that new car for sale.   Price doesn't seem too bad, and you know, the payments aren't too shabby.  And the salesman says he'll give you ten grand for your old car.  Sweet deal, no?

But logically, it makes no sense.   You have a paid-for car that costs nothing per month and works well.   The insurance is 1/3 the cost of insurance on a new car - not to mention taxes and tags, etc.  You are going to dump that and spend $20,000 of your money so you can have a shiny new car?  It makes no sense.

"But wait," you say, "What about all those unexpected repair bills?" and that is just the sort of self-justification we all use to argue "logically" that our emotional desire for a shiny new car is justifiable and not just a hemorrhaging of cash.

"But," you say, "you'll have to get a new car some day - even a newer used car!"    And that is indeed true, but by "dumping" your used car, you are getting rid of a transportation device that has a very low cost of ownership and buying a transportation device that has a higher cost of ownership.   The longer you can keep each car in your life, the lower the overall cost.

The worst way to go, of course, is to jump from one brand-new car to another - which is what leasing does - as you pay the highest cost of ownership, in terms of depreciation.  So, if you don't need a new car, then now is certainly not a good time to buy.

Compounding the situation today is that many Japanese makes are in short supply, which means prices for these cars are very high - which allows US manufacturers to raise prices.  Short supply, high demand - shitty time to be buying a new car.

Now, in 2-3 years, all the cars being sold today will show up as used cars - and that might be a better time to buy.   If your current car has fairly reasonable miles on it (less than 200,000 for example), it may be smarter to wait a few years before jumping to newer iron.

And that is my plan - all my friends are driving over and showing off their "new" cars - but for me, we hope to flog our existing fleet for another 3-4 years at least, before having to buy something newer.   And in the meantime, we will save up for that eventuality, so we can pay cash for such a purchase.

And hopefully, it will be a strategic buy - and opportunistic purchase - rather than a desperation buy.

The worst thing in the world you can do is go into a car dealer and say, "I desperately need to have a car TODAY!"
Newer Post Older Post Home