How Immigration Can Help the Economy 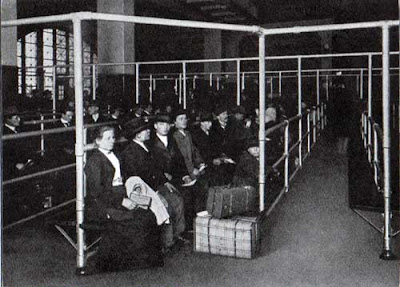 Almost every period of mass immigration in this country has also been a period of growth and prosperity.  On the contrary, when anti-immigration forces have their way, the economy stagnates.  As our population growth stagnates, so does our economy.  Immigration foes throw gasoline on the fire of recession by pushing for more restrictive immigration policies - the opposite of what would spur growth.

As I noted in my "What Happened to the Pyramid Chart?" the population of the U.S. is changing dramatically.  It is not shrinking, but the demographics are shifting upward, and this means the population of people of working age (at the bottom of the pyramid) is not growing in proportion.

And while our economy is technically not in recession, the growth rate is stagnating - only a percentage point or two - which is not enough to provide the employment and growth opportunities we need.

Simply stated, since our population is aging and facing retirement, they are spending less - nervous about their own futures.  And since the base of our population pyramid is small, fewer and fewer people are being asked to shoulder an ever-increasing burden of older people.

Since our native population is not growing, immigration is one answer to this problem.  And in the past, this solution has worked.

Ronald Reagan, who many tea-party activists think was more conservative that he was, was a champion for immigration amnesty and arguably pushed for and obtained the largest immigration program change of the latter half of the 20th Century.  And during this period of his administration, the economy boomed.

Today, of course, the words "immigration amnesty" are an anathema to xenophobic tea-party activists, and if you asked them, they would tell you that Ronald Reagan never did any such thing.

Bill Clinton, like Reagan, took office during an economic downturn, and like Reagan, opened the doors to immigrants in what some have said was the largest sustained wave of immigration in the history of the US.  And as in the Reagan years, the economy boomed.

But then, something changed.  Perhaps the Bushes don't like Mexicans, although their family has strong ties to the Hispanic community.  Regardless, by pandering to the xenophobic wing of the Republican party, immigration - both legal and illegal - is way down.  Today, the issues are all about closing our borders, not opening them.  Immigrants are viewed as a "drain on the economy" and teabaggers consult the Bureau of Specious Statistics for "evidence" that they are using more and more of our precious resources (never mind that they pay taxes, contribute to Social Security, and through rents, pay property taxes).

And Union members - often on the far Left of the spectrum - jump on the "we hate Mexicans" bandwagon, by arguing that they guy mowing your lawn is responsible for the shutdown of the car factory in your town.   Never mind the fact that the two are unrelated - those busboys at the restaurant and "taking our jobs" - jobs that no one else will do or want to do.

And of course, the Nightly Nooze feeds this media frenzy by breathlessly reporting about Mexican Drug Cartels and murders South of the Border.  And tea-baggers spread specious rumors about such things happening in the USA through mass-forwarded e-mails.  The message is clear:  Latinos are a dangerous and violent people who are out to take over our country.

Not since the xenophobic wave of hostility toward Chinese immigrants in the 1800's has such a mass-organized hate campaign taken hold in this country.  And what is utterly mystifying is that the Latino community in this country is very large - the majority in many cities and, perhaps soon, some States.

So, we build a wall between us and Mexico, because their drug violence is their problem, and has nothing to do with America's appetite for drug consumption.

Here's an idea:  Let's take all our drug users and ship them to Mexico.   We could swap one drug user for one migrant worker looking for a job.  I think it would be a net plus for our economy - like sending whiny Americans to Africa in exchange for underprivileged Africans.

But all kidding aside, when a country turns inward and starts to hunker down and refuses to engage other countries - and talks of enacting tariffs and retaliatory tariffs, as well as curtailing immigration and closing its borders, it ends up, in short order, like North Korea - Isolated and in perpetual poverty.

And unfortunately, since the attacks of 9/11, it seems American is headed, more and more, in this direction.  People want to disengage from the world, go up to their room, smoke pot and listen to AC/DC records and ignore Mom's calls for supper.  But that is not a sustainable model for business or for a Country.

Open the gates and let them in.  It will do so many good things for us.


1.  As population increases, demand for housing will increase - meaning housing prices will go up again.   You will no longer be "upside down" on your mini-mansion, and in fact, you may make a little money on it.

2.  As the economy grows, companies in the US will make more money - having more customers to serve - and more people working.  So the value of your stocks and investments will go up.

3.  Since immigrants work, they will do the jobs than native-born welfare recipients will not stoop to do.   So businesses can hire people and be productive - and competitive on a world scale.

4.  With more people on the "bottom" of the age pyramid, the burden of America's aging population will be less - per worker - and thus more affordable.

5.  We can actually grow our way out of recession.

But that last element is the key - growth.  If we do not grow, we stagnate.  And if you look at our age and population chart, we are stagnating and aging and becoming top-heavy with the elderly.

We need immigration to correct this problem.

Unfortunately, since 2012 is an election year, this issue will be swept under the rug - for the time being.  Americans are still in this insular and xenophobic mood, and the anti-immigrant hysteria is still at fever pitch.

Perhaps after the election, President Obama and Congress will have balls to do what is right.  Perhaps.

But then again, why are we letting a vocal and ignorant minority of this country dictate our policies?  It makes no sense, really, if you think about it.   Everyone is worried about pissing off a tea-bagger.   But tea-baggers are not the majority.  That's politics for you, I guess.
Newer Post Older Post Home