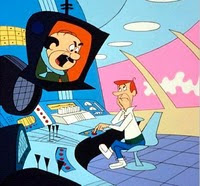 
When I was a kid, we used to watch the Jetsons and the Flintstones, which seemed sort of bookends of the past and future, as viewed through the eyes of Hanna-Barbera.  And in every episode of either cartoon, the boss, Mr. Spacely or Mr. Slate would scream, "Flintsone!" (or "Jetson!") "YOU"RE FIRED!"

Being fired back then was a big deal.   It still is today, however, people are generally not fired in an angry tirade by their boss, but rather quietly laid-off, downsized, let go, or otherwise terminated.  Today, firing someone is not something taken lightly, as everyone has all sorts of "rights" and so often, companies wait for a downturn in the economy to cut loose their dead wood.

But why was being fired such a traumatic thing back in 1965?  We lived in a different world then - there were no 401(k) plans or IRAs.   You went to work for a Company, back then, and often expected to stay there for life.   The company provided pay, health insurance, a retirement "pension" and other benefits.  And as such, you remained a toadying, faithful retainer, willing to do whatever the boss said, even if it meant trying to cover up a toxic waste spill in Bhopal, India.

As I noted in an earlier posting, the relationship between employer and employee was a little bit of Corporate Socialism of the era.  You went to work for IBM, Xerox, Honeywell, GM, Ford, Dupont, or Esso, and you expected to stay there for life - provided you kept your head down and did your job.  Shrinking markets and downsizing of companies just wasn't in the cards.

Today, of course, things are different.  Few people expect to make a career at any one job or company.  Most folks expect to be laid off at least a few times in life - or to quit a job for a better prospect.  And companies increasingly are looking at employees as disposable commodities - and have no loyalty to them whatsoever.

Thus, it is not unusual to be laid off from a company at about age 55 or so these days.  As you get older and get paid more and more - and as your health insurance premiums increase more and more - your cost to the company increases dramatically.  Pretty soon, your cost per hour is more than twice that of a younger employee - and they can get more work out of two younger, less experienced employees.  So they lay off you and hire two of them.  And according to the Supreme Court, this is not age discrimination, but in fact, price discrimination -which is perfectly legal.

Keeping your head down and sucking up to the boss is no longer enough, these days.  And that is why, in this global market, you have to plan on unpleasant surprises down the road.   The old days of the company taking care of you from cradle to grave are long gone and you are on your own, now.

And yea, you can argue that it is unfair and all - let me know where that gets you.  Because I doubt the old days of Corporate Socialism are coming back anytime soon.

PLAN on being laid off before you really want to retire.   Put aside money into savings.  Think about making financially independent as a goal, instead of setting a fancy car or jet ski or other consumer item as your goal.  When the shit hits the fan, you will be prepared.
Newer Post Older Post Home