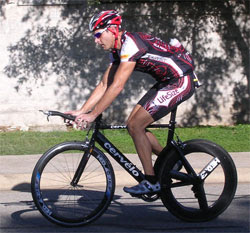 Rule #1 for the serious cyclist:  Never Smile!  This is not fun, dammit, and bicycles are not toys!


We get a lot of yuppie jerk-asses who come here to the island.  They drive 20 miles from a neighboring island to come over here and annoy the snot out of us.  Why is this?  Well, they ruined their own island through over-development and by building tacky and cheaply made mini-mansions and strip-malls.  Heck, they even have stoplights there, if you can imagine that!

So they come here, because our island is less crowded.  Go home!  Stay on the island you fucked up, don't bring all your bad vibes over here!  The next thing you know, they'll be demanding we build them a Starbucks!  Goddam Yuppies!  Hate them almost as much as dirty stinking Hippies!

And they come in their Lexuses (Lexi?) with their $5000 carbon-fiber racing bicycles (no "fixies" yet, but wait for it) and their fake racing uniforms "Just like Lance Armstrong has!" and all the accoutrements and accessories a "serious cyclist" needs, which doesn't include, of course, a sense of humor or even humanity.  They all look alike and dress alike, like streamlined alien clones.

Back in Hemingway's day, they used to joke about people going on safari in Africa, all fitted out by Abercrombie and Fitch.  Back then, before it became an overpriced Gay T-Shirt store, they sold safari and camping gear, on 5th Avenue in New York, so all the wanna-bes could get kitted out for deep sea fishing or African safari.   They even sold elephant guns.  No kidding.

But it was a joke.  These rich folk just trying to buy their way in to something.  Everyone laughed at them.  And the same is true for these "serious cyclists".   They think that by running up credit card debt, they can become the next Lance Armstrong.   But it is all posturing and posing of the worst sort.

And worst yet, they ride on our shoulder-less roads, which is not safe, and then get all pissy when you try to pass them.  We have miles of bike trails on our island - it is sort of famous for that, going back to 1910.  And you can ride on our rock-hard beach, too, which, with a tailwind, is fun.

But you need a beach cruiser or mountain bike for that.  And the "deadly serious cyclists" would never do that, of course!  Too much rolling resistance!  Uh, why were you doing this again?  To get exercise?  Or just to be a poseur.  The latter, I'm afraid.

I have a much-battered and well-loved decade-old TREK that I think I paid $450 for new, which I thought was a lot of money.   But I can ride it on the trails and on the beach and NOT constantly feel the hot breath of a Buick behind me.  And it is great exercise.   And when I am done, hose it off, spray the chain with WD-40 and it's good to go.  I think half the gears are shot, but on a flat island, what do you need more than 3 speeds for?

So why do the "serious cyclists" buy these expensive bikes and ride them around annoyingly?  Because it is a status thing - to brag and show off to the other "serious cyclists" how much you can afford to spend on a disposable commodity.  And to show how "serious" you are about the "sport".

But it is not like they are training for the Tour de France or anything - or even a local race.   They are just showing off in the typical annoying Yuppie way - by buying things.

You know, I detest "serious" people.  They really know how to suck all the fun out of life - turning everything into a competition of expert-ism.  What is the point?  And they can never laugh, particularly at themselves.

But beyond the fact that these people are a living joke and annoy the snot out of everyone, there is a far more substantive reason not to get caught in the "serious cyclist" trap.   And that is your inevitable collision with an automobile.

Riding a bicycle in traffic, particularly on a road with no shoulders (like the GW Parkway, at rush hour) particularly when there is a BIKE PATH, is just suicide.  A 6,000 lb SUV going even 35-45 mph will crush you and your $5000 bike into nothing, and in a real hurry.

And how do I know this?  I have friends who have been hit - or have had a loved one hit.  The lucky ones survive - with months in the hospital and years in rehab.  The unlucky ones leave behind a widow and child - years before their time was due.   And for what?  To show off your new spandex bike shorts?

Yea, yea, yea, the driver was at fault.  So what?  When you are bleeding out on the pavement, looking at the underside of a car in your last moments of life, that is cold comfort.  It is just incredibly dangerous and foolhardy.

Fortunately, there ARE an increasing number of places in this country where you can ride a bike and not be molested by cars - miles and miles of bike paths are being built everywhere and "greenways" are turning old railroad tracks into bicycle commuter routes.

But the "serious cyclists" look upon such routes with disdain.  Their racing tires will sink into anything softer than asphalt.  And their thin rims will bend to a pretzel when they hit their first tree root.  As a "serious" mode of transportation, the racing bike leaves a lot to be desired.

Posturing and playing pretend dress-up is never a good idea.  It is not real, just an act and an expensive one at that.  Bicycling should be fun, not a soul-sucking hobby that bankrupts you.   One of the best aspects of bicycling is that it is CHEAP and FUN, and yet, the Yuppies have found a way to ruin even that.

I just hope I don't hit one of these sonsofbitches.   It is not hard to do - they swerve right out in front of your car when you try to pass.  What sort of idiot does that?  A Yuppie idiot, that's what.
Newer Post Older Post Home