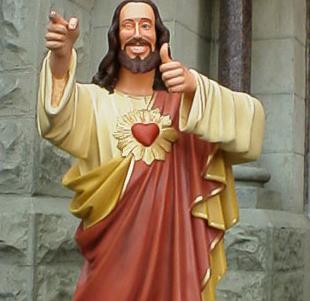 Up, Up With Jesus!

Belief is a powerful tool. And as I have noted before, any tool or invention has its dark side.  Money is a powerful invention and tool - and an idea, really.   It has the capability to do great good or great harm.  It all depends on how you use it.

And beliefs can be harmful to you, whether it is believing in a Real Estate market that will always go up, up, up! or believing that the price of gold will never fall.  Both are beliefs not founded in any sort of reality, other than listening to the opinions of others, and not processing raw data yourself.

But often, beliefs not founded in reality can be bootstrapped by contrary data, not invalidated.   People find reasons to show that the data that undermines their belief system, actually supports it.  They take a "No" and turn it into a "Yes".

This was driven home to me by a tragic story about a young boy who jumped off a building and killed himself.  He came from a strict religious family and was Gay.  All of his siblings rebelled against their strict parents in one form or another.   A sister eloped with a boy of another religion and left the State, never to return.   Another got into drugs and alcohol abuse.  And this youngest sibling, rejected by his parents and feeling unloved, took the dramatic (and stupid) step of killing himself.

Now, as a parent, one might start to wonder, if all of your kids end up troubled whether maybe, just maybe, your parenting skills are perhaps not up to par.   What is it that you did wrong that made your kids rebel and leave you - or kill themselves?  Perhaps by depriving your children of unconditional love you created the problem?  Perhaps the strict and unforgiving religious teachings they forced on their children were to blame?  Most normal people might think that - at least as a possibility.

But no, the religious parents thought just the opposite.  "The Devil," they said, "is out to get us!  Since we are strictly devout Christians, he has targeted us for special abuse!"  So the reason their son was Gay was not that he was Gay, but that the Devil wanted payback.   The reason their daughter married a man from another religion wasn't that she might love him - or wanted to get out of the dysfunctional household and latched on to the first ticket out  - no, no, it was the Devil.  And the reason their other son lapsed into drug and alcohol abuse wasn't because he was trying to anesthetize himself from the post-traumatic stress of growing up in a house where beatings were regular and love was scarce.  No, it was Satan, in all his glory, exacting revenge on a True Christian Family!

So rather than call into question their beliefs, this contrary data actually bootstrapped them and made them even stronger.   The answer was not to try to love and understand their children for who they were, but to cut them off and abandon them as the spawn of Satan, and to spend even more time and money on their fundamentalist church.

And this is sad - and a common occurrence these days.  And what is doubly sad is that the parents inflicting this sort of upbringing on their children are not themselves the children of strict religious backgrounds, but rather later converts to such extreme religions later in life.  And the fallout from such families, I think, will be extensive in the years to come.

What triggered this posting was a trip to Atlanta, where I stayed at the hotel where the young boy jumped to his death (a  messy and impolite thing to do, and utterly wasteful).  Just a suggestion, but if you really want to "get even" with your Baptist Parents, go out and be happy in life - that will really, really piss them off.    If you kill yourself, it just gives them permission to say that you were crazy and that they were "right".

At the same time I was there and heard this horrific story (from many years back) a large number of youth groups with Up With Jesus invaded the hotel for the weekend, to drink Mountain Dew, eat candy, and sing really, really bad Christian Rock (You can always tell a Christian Rock song, as it sucks.   You can't have Sex, Drugs, and Rock 'n Roll without the Sex and Drugs, apparently - the songs of rebellion don't work for conformity).

What amazed me about these kids was not that they were polite Christian children - as one might expect - but rather they were arrogant, rude, abusive, and rather wild.  They ran around the hotel saying rude things to other guests, snickering, riding the elevators and setting off the alarm bells, and playing their electric guitars in their rooms, at full volume, at 6 in the morning.    What would Jesus do?  Kick some Christian Youth Butt, I think, particularly if he was trying to sleep.

It was a bit shocking at first, but perhaps being told that you are "special" as a Christian all your life gives one carte blanche to think you are better than everyone else.  And perhaps their rude behavior was just a manifestation of suppressed rebellion.  I do not know.  But to some extent, they were only sort of like a slightly friendlier version of Hitler Youth.

And no doubt, for many of them, down the road, the realities of life will clash with the indoctrination of their upbringing (an indoctrination that likely their parents did not go through) and the results will be, well, unpleasant, to say the least.

But then again, it is possible they may bootstrap these contrary experiences into strengthening their beliefs, thus perpetuating a cycle that eventually, like an undamped electrical oscillator, will swing wildly out of control - and another Republican Senator will give a tear-filled press conference and then resign to spend more time with his family.

So what does this have to do with personal finances?  Well a lot:

1.  Religion and faith is a fine thing, but don't let it dominate your life to the exclusion of all else.  Giving all your money to a church and viewing your whole life through the prism of religion is never a good idea.  Extreme and hateful religions, whether they are the Taliban or the Born Again, are a lousy idea.

2.  When analyzing raw data, analyze the data with an open mind, rather than coming to a conclusion and then fitting the data to the conclusion.  We saw this in the Iraq war (where data was collected to support the premise, rather than vice-versa) and we see it in people's personal lives - such as the self-justification people use to rationalize leasing or other raw financial deals.

3.  If you are trapped in a situation like the one described above - with unloving parents, an oppressive religion, or an abusive spouse - the best thing to do is escape and form your own life.   Killing yourself just vindicates your enemies.  Destroying your life with drugs and alcohol may make you feel less pain (but likely just the opposite) but it will surely give your opponents the ammunition to say "I told you so - he would never amount to anything!"  Leave abusive relationships, and never look back.  Take care of yourself!  I give you permission.

And if you are ever staying in a downtown hotel and 30 church buses pull up with the "Up With Jesus" singers aboard - check out right away.
Newer Post Older Post Home