How the Internet is Changing Our Lives - for the Better 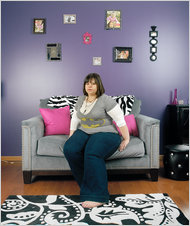 Amanda Hocking at first may seem like an unlikely best-selling author.  But thanks to the Internet, she has self-published her way to stardom.
I have noted time and again how the Internet will change our lives for the better.  And unfortunately, most Media Idiots think this means Twitter or Facebook, which are popular fads, but hardly major game-changers on the Internet (since they don't make money and really don't do anything for the user but waste time).

But as I noted in The Death of the Music Industry, the Internet has the capability of making over an entire industry overnight - and replacing it with something that is perhaps better and more egalitarian.  If you have a garage band, you can self-promote and sell your music online, without the need to be "discovered" by a record industry hack.  It is a new business model, and perhaps such a dramatically different one from before that it is hard to comprehend.   But it is, in many ways a better model.

In publishing, a similar thing is happening.   People are buying cheap readers (Kindle, Nook, etc.) or fancy pads, but the result is the same - eBooks are becoming more and more popular, bookstores are closing down, and the electronic media is supplanting the physical one.  And today, you can self-publish online without an literary agent or publishing house.

Amanda Hocking, recently profiled in the New York Times Magazine, is the kind of kid (she is now 26) who liked to write fan-fiction in high school.  I doubt she was a popular cheerleader or Prom Queen - but then again, people who are "big in high school" rarely succeed in life later on.

And perhaps in the old bookselling model, people like Amanda would have ended up working in one dead-end slacker job after another, after being discouraged from writing by one rejection after another.  And she was rejected - by every major literary agency and publisher in the business.  So she did something that in the past would be nearly impossible to do - she self-published her books online.

And they took off.   And she started making money - a lot of money.  And now she has a literary agent and publisher.  It is the kind of Internet success story that make you think that maybe, just maybe, the world is going to be a better place in the future.

To be sure, in the past, you could self-publish a book.  But you had to pay, up front, to have the book typeset and printed, and then you had to go from bookstore to bookstore selling your book.  A few authors did become successful this way - but very, very few.

Today, anyone can go on Amazon and upload a book.   And the price for such books is usually very cheap - from 99 cents to $2.99 a copy.  Without the overhead of a publishing house, an author can "sell" their product to readers for a very low price.

And within a year or so, Amanda found herself to be one of the best-selling authors on Amazon.  And no doubt, publishers went through their wastebaskets, scrambling to find the letters she had sent to them years earlier, begging to be published.  It is a bit of poetic justice.

It is heartwarming to see a success story like this - and to see young people succeed in life - succeed because they stuck with their gut instincts and intuition, and also took advantage of the opportunities they have today.

I am sure that there were plenty of folks who told her, "Amanda, your cute stories about trolls and vampires are nice and all, but let's face it, you need to be realistic - get a good job somewhere, find a guy to marry, and settle down!"

And in the past, maybe that would have been good advice - without the option of self-publishing on the Internet, perhaps she never would have succeeded.

But that illustrates why career advice from anyone over 30 is usually suspect - the world we old people live in is always fading fast.  And the career opportunities for young people are going to be in places we cannot even conceive.

I noted in an earlier posting that as a young man, I liked to write software.  And I wrote a number of programs for various pre-PC computers (Textronix, CPM, Apple II, etc.) for data processing and plotting - and was paid to do so.   But most adults I knew at the time told me that software was a dead-end, and that Electrical Engineering was the place to be.    Indeed, at the time, "Computer Science" was not considered a true science, and space in the Engineering building was only given begrudgingly to such majors.  It would be another decade before the Patent Office even recognized software as a technology.

And yet, who made all the money in the burgeoning computer business?  The software people.  The hardware side quickly became a commodity business, where everyone competed on price to produce the lowest-priced machines.  The margins were slim, and Electrical Engineers today are dime-a-dozen.

In the mid 1990's, the Internet started to take off.   Creating websites was the big thing - but no one was quite sure what to do with them.   How could anyone make money off this Internet craze?  No one will buy things online, would they?  And if most of the content was free, how could you make any money at it?

And of course, those critics were right - in part.  A lot of the dot com startups went belly-up, and will continue to do so, if they cannot build a profit model.  But a few do survive and thrive, and as a result, new markets and new opportunities are created.  Amazon flourishes, while Borders and Virgin close brick-and-mortar stores.  Netflix takes off, while Blockbuster languishes.

While many people see the world today as a series of intractable problems, I am far more optimistic.  A kid from rural Minnesota can become a bestselling Young Adult author, without ever leaving home.  And that right there is a pretty powerful thing.
Newer Post Older Post Home