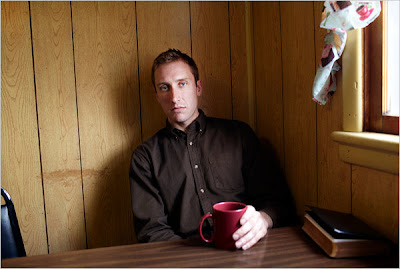 He now claims to be a fundamentalist Christian, but even in this photo he looks Queer.


In the New York Times magazine a few weeks ago, they seemed to be doing a "Gay Issue" to celebrate the passage of the Gay Marriage act in New York.  The good news is, you can get Gay-Married in New York now.   The bad news is, be prepared for a $15,000 property tax bill.

New York may now be a Gay mecca, but it is hardly an affordable one.  And outside the city, jobs are scarce, the weather sucks, and the economy is in decline.  I am not sure how legalizing Gay Marriage solves all those problems, but at least you can say the legislature got something accomplished on a Bi-(pardon the pun)-partisan basis.

One of the articles in the NYT Magazine was about my "ex-Gay friend" who went from Über-Gay to Über-Christian, overnight.  One moment the dude was writing for a Gay magazine and leading a Gay youth group, and the next moment he is living in Montana and going to Bible College.

At first this may seem to be an anomaly, but when you start connecting the dots, there is a long line of Gay Nazis that go back to, well, the Nazis.  Ernst Julius Röhm, was about as Nazi as you can get and also as Gay as you can get - and you know what happened to him.

Later figures, such as the odious Roy Cohn, fared better, being quite successful for many years, embracing an anti-homosexual agenda while at the same time being closeted homosexuals.

And the lineage continues on today, with the likes of Larry Craig, who was a right-wing Republican who was caught soliciting sex in a men's room.

What is going on here?  And what does it all mean?

Well, I think in terms of understanding Human Sexuality, we, as a culture, nation, and race still are in the infant stages.  Really, we still are at the giggling stage of teenagers.  A discussion of sex and sexuality is still difficult in this country - or any other - and the theories and thoughts of today will seem primitive in 20-50 years.

The fundamental problem we have today is that sexuality is polarizing - we are told today that you are either Gay or Straight, and that anything in-between is not permitted.   Alfred Kinsey tried to tell us that human sexuality was not so cut and dried, and that perhaps people's sexual preferences were on a continuum - the so-called Kinsey scale.

But lately, Kinsey has been discredited as being unscientific because, horror of horrors, he actually had sex himself - and sexual researchers are supposed to be above all that.  You can work in the candy factory, but no free samples!

So early on these days, people are pushed into one of two camps - Gay or Straight.  But in the past - the not-so-recent past, things were not so cut-and-dried.

Men like to have sex.  Usually once a day, if not more.  Yes, I know that is shocking and disgusting, but there you have it.  And men are often not particular with whom (or what) they have sex with.  And in the past, it was not so uncommon for "straight" married men to have sex with Gay men, through various (mostly illegal) venues, particularly if their wives had lost interest in sex.

They may be Gay, perhaps Bi-sexual, or..... whatever.  Labels can be a prison, in some regards, in that the force people into behavioral modes that they are not comfortable with.

So the Larry Craig's of the world don't consider themselves to be "Gay" - which is exactly what he announced after being caught soliciting sex from a Police Officer in a public restroom.  People rolled their eyes and said, "Yea, right, sure buddy!"  But in a sense, he was being honest (or as honest as he could be).  He did not consider himself to be "Gay" in that he wanted a boyfriend, a new Jeep and a rainbow flag to fly from his apartment in the Castro district.  He wanted to remain married, and be a Father and Grandfather.  It is just, well, after a long airplane flight, he wanted a blowjob.

And of course, that scandalizes people. "You can't do that sort of thing!" people say.  But as Bill Clinton proved, yes, you can, and it happens all the time - people have sex.   And often not with the person they are married to.  Act shocked.

A friend of mine from College was once giving a talk on sex and sexuality during "Gay Pride Week" - which in 1985 was a pretty big deal.  He complained then about his concern of young men aping the characteristics of Gays (he predicted the Metro-sexual movement by two decades!).  "You know the type, they will say they were Gay in college, and then get married and settle down", he said.

I thought that was an interesting comment, and perhaps in the more closeted era of 1985, one could be "Gay in College" and then later change your mind.   For example, I know of a man who is now married with a child - and apparently happily so - who had an affair with his Gay roommate in college.  Everyone knew about it, of course - it was the worst-kept secret in the world.  And we all wondered, "Was he, or wasn't he?" and maybe he is a little of both.

Only except, perhaps, it isn't.  And to say this today in America is akin to criticizing the Statue of Liberty.   A number of right-wing ministries are pushing an "Ex-Gay" agenda that is being roundly criticized - and rightly so (most of the founders of these "Ex-Gay" ministries end up being tossed out for, well, you know).  These religious-based ministries are taking another absolutist position, that everyone who is Gay, chooses to be so and can change their orientation as a matter of free will.

And while the way they are going about this is all wrong, there is a nugget of truth to what they are saying.   There are some people in the world who are nominally heterosexual, but may be pushed, by circumstance, choice, or environment, to select a homosexual lifestyle.  Perhaps not many, but some.  And in the past, such people may have been referred to as bi-sexual, today that moniker has fallen from favor.

So today, we have extremes - you have to chose one extreme or the other - and that is why this fellow shown above, who holds his coffee cup like a total Nancy, feels compelled to go from ultra-left-wing Gay to ultra-right-wing Christian, and can't seem to find happiness anywhere in-between.  Because there is no in-between today - there is no haven for someone who says, "You know, I enjoyed the BJ, but I am not sure I want to marry another guy."

Today we confuse Sex with Sexuality - sexual acts with sexual orientation.  And that is utter nonsense.   The straightest arrow in the world will, under the right circumstances - have homosexual sex.  That doesn't make him Gay, just typically human.  But in today's political climate, such nuances are no longer allowed.

And further than that, today we confuse sexuality with politics.  If you are Gay, you are told what your political views should be.   You are in favor of Gay Marriage (natch!) even if you might wonder what the fuss is all about.  And you have to vote Democratic, be ultra-left-wing, and feel sorry for poor people and minorities.  It's a package deal.  You get the BJ, you have to vote for Kerry or Al Gore.

But, we are told, that is not possible. Go back to your Ghetto - to your interment camp - Dupont Circle, The Castro, Christopher Street. You are pigeonholed and categorized and packaged and labeled.  You have to be a certain way - it is a package deal.

And increasingly, the package they are selling is one designed to appeal to commercial interests or provide poor normative social cues.  Marketers love Gays as they have lots 'o disposable income and can be persuaded to part with it if you tell them they will look fabulous.  And there are magazines and periodicals and even a TeeVee channel programmed (in every sense of the word) to provide you with your new normative cues.

But I think this may be going a bit too far.  Perhaps this is the "Gay Agenda" that the far right harps about so much.  We are making Gay seem like a fashion statement or a lifestyle choice (as opposed to an orientation) and moreover making it appear attractive to young men and women at a time in their life where homosexual attractions may be normal, but transitory things.

No longer could someone be "Gay in College" - if you do that, you are "out" and made a commitment that is more binding than a Student Loan.

And I for one think there is something wrong with selling sexual orientation like soap.  If you want to have sex, fine - it is fun.  Do it.  But it is not a political statement, a lifelong commitment, or a dedication to one course of action.  Don't feel you are locked in to being one way or another.

And don't feel that your sexuality defines who you are or what your political views are - and conversely never assume that because someone likes people of the same gender that they are sympathetic toward your public housing project.  One does not naturally lead to the other.

I feel sorry for coffee-cup guy, as he was clearly not happy being Gay, and I suspect he will not be happy as a fundamentalist Christian, either.  (A lot of people join and leave that movement on a regular basis, which is why it is a "movement" - people are constantly moving in and out of it).  He probably was just some average schmuck who had some sex and was convinced that a sex act would define his life.  When it seemed not to fit, later on in life, he swung to yet another extreme.

Extremes are rarely good ideas from a personal perspective.

I predict that 20-50 years from now, we will look back and cringe at our understanding of Sexuality and Sex, much as we do today or our understanding of 20 years prior.   And I think what we will cringe about the most is our tendency today to pigeonhole people based on sexual acts - stereotyping their behavior based on something that is only a part of their overall being.

Be yourself and be true to yourself.   You do not have to follow someone Else's normative cues.


UPDATE:  This site, claims that the "ex-gay" fellow profiled in the NYT magazine has changed his name and moved back to San Francisco.  How shocking and unexpected!   Sort of feel sorry for the guy, up to a point.  He may be enjoying all the attention - after all, he's hardly 40 and has had not one, but two movies made about his life - when he hardly has done anything of note!
Newer Post Older Post Home