Dunbar's Number and You. 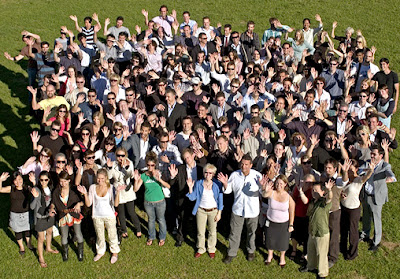 Once a group gets to have more than 150 members, it loses cohesiveness.

Dunbar's Number is an interesting theoretical concept about people and cohesiveness.  Simply stated (or perhaps oversimplifying the concept, my apologies to Prof. Dunbar) the human brain can only maintain cognitive relationships with a limited number of people, due to the size constraints of the cerebral cortex.
People have applied and misapplied this concept to a number of things - everything from the phenomenon of social networking to how military or work units are structured.   And of course, this is not a fixed number, but a mean.  The larger a group is, the more time is necessary to spend on "social grooming" to keep the group together.
This is why law firms fall apart at about the 150 mark (or smaller), I think - usually splitting off into two 75-person firms which are more productive and more effective.  Once a firm gets to be a certain size, people spend more time gossiping and socializing than they do working.  From my personal experience, I think Dunbar is onto something.
If you run a business, law firm, or whatever, consider splitting it in half when it reaches a certain size.  It may be an ego trip to be at the helm of a large organization, but once you get above a certain size, you are just spinning your wheels, as people become less and less effective and have less of a feeling of inclusion or as part of a group.
As noted in a recent opinion piece on CNN:

Scientists at Indiana University collected the conversations of 1.7 million Twitter users over six months, a total of 380 million tweets.
What they wanted to know was this: How many real connections do Twitter users have? Not just silent following, not retweeting, not a stray @ message to someone, but a real back-and-forth conversation. How many people can you maintain that kind of contact with online before you get overwhelmed?

The answer, on average, was roughly 150.

This article illustrates why most of us do not feel comfortable on Facebook with more than a certain number of "Friends" - and perhaps why, as we get older, that number becomes less and less.  Kids may have 250 Friends on Facebook, most Adults have a few dozen, if that.  Our cerebral cortexes are shrinking as we age.
And I think the Dunbar number differs for different people.   My personal Dunbar number is 15 - if that.  I am not comfortable trying to maintain a lot of superficial relationships with large numbers of people - and don't feel I am missing out by not doing so.
Why is this?  Well one problem is the social grooming aspect.   For most people, this is a big part of their day.   Myself, I cannot stand it.  I would rather hand people a card saying "Take this card in place of my listening to your boring story of what you did this weekend.   I hereby validate your existence and your place in the social hierarchy of our workplace, etc."
Because that is what all of that sort of nonsense is - social grooming.   When you see someone in the hallway, you say  "Hey Joe, what's up?" and they reply, "Not much! How are you" and you say "fine" and keep going.  Maybe later in the day the exchange is shorter and then it finally devolves into a nod.
But we feel important - validated - by these little human dramas, and if you fail to interact properly, trouble ensues.
For example, you say "Hey Joe, what's up?" and he stares stonily ahead.  Maybe he is deaf.  Maybe he didn't hear you.   Maybe he is deep in thought due to some idea he has about work.  Maybe he is listening to his iPod.   Whatever the cause, you now think he is an asshole and he has committed a social faux pas without even realizing it.
And the larger the organization, the more time is spent on this sort of thing - company newsletters, conference room meetings, get-togethers, donuts in the break room, etc.  The amount of time left for actual work decreases accordingly, to the point where everyone has to "work late" just to get anything done, as the workplace is 8 hours of social grooming.
And this phenomenon explains why people serial cell-phone, text, twitter, or facebook.   Most of the actual communication is along the lines of "Whassup, Dude?" and quixotic, ambiguous replies.  Translated, these read, "Hello, I validate your existence, please validate mine and confirm our relationship in the social hierarchy" with the reply being "Existence validated, thank you.  Your social position is confirmed".
Read someone's Facebook or Twitter "Feed" sometime, and you'll see it is often little more than that.
And that is why I stopped using Facebook.   I found I was just validating and looking for validation with yet a new online peer group.   And many discussion groups fall along the same lines - they are not discussions about the nominal topics, but just a chance for "regulars" to validate each other online.  It is all social grooming and little actual information.  The signal-to-noise ratio is rather poor.
So what does this have to do with finances?   Well, the answer is simple.  First, Facebook is, by definition, a time-bandit, as you are trying to up your Dunbar number, often with old friends or people you meet online.   The more folks you know and try to stay current with, the more time you will spend - and emotional energy - trying to maintain these relationships through social grooming.
This will detract from your own personal time and work time, and as a result, you will be less personally productive and less productive at work.  Joining a lot of groups and having a "social circle" is fine and all, but it does come at a personal cost.
I think also this phenomenon illustrates why smaller group are more effective than larger ones, in many instances.  More time is spent on working and less on social grooming.    When I worked for UPS washing trucks, me and another fellow washed more trucks than any of the three-man teams did.  Why?  Well, for one, we stayed out of each other's way.   But on another level, we spent less time on social grooming (or bullshitting, colloquially) and more time on washing.  So we got a lot more done than the three-man teams who were a bunch of chatty Cathy's.
It also means that you may be more effective working in a smaller company than a larger one, and if get in touch with your own personal Dunbar's number, it may clue you in to the best places to work and study.
I think also, from a societal point of view, it illustrates how, when you get above a certain number of people in an organization, you start to accumulate slackers, trouble-makers, and vandals.  You hire that 151st person, and the next day there is graffiti on the wall.
Time to open a branch office!
Newer Post Older Post Home