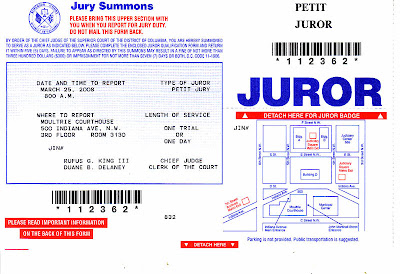 A person who recently dies gets a summons to jury duty.  The media thinks this is newsworthy.  Huh?

Today on NPR, Susan Stamberg, who giggles when she talks (simpers, actually) tells us the amazing story of a man in Massachusetts who was sent a summons to appear in court - for trying to duck out on jury duty.  The only problem was, he was dead!

This is what they call a filler story, and there are never any shortage of such stories.

Think about it for a second.   In a nation of 330 million people, a lot of people die (you will, too, surprisingly).  And yes, after you die, your name is not automatically struck from mailing lists, voter registration rolls (although they are getting better about this), courthouse records, etc.

God does not fill out a "mail forwarding" card for you at the Post Office.  You have to do that yourself.

So, no, it is not entirely unexpected that you would continue to get credit card offers in the mail, even after you are dead.  And yet, the news reports this as if it were some sort of anomaly - they interview the next-of-kin, who scratches their head and says, "Gee Whiz, didn't the computer that spits out this junk mail know that Uncle Earl was dead?  I mean, everyone here in Squirrel Hollow knows that!"

Or a person puts down their pet's name on some document, which ends up on a mailing list, and lo and behold, they get a credit card offer in their pet's name.  Gee, I wonder how that could happen?  After all, a computer should realize that "Rusty" is a dog's name, right?

And of course, there are next-of-kin and pet owners who fill out the application forms and actually get credit cards, which they proudly display for the camera.  Guess what?  That's called fraud - getting a credit card in the name of deceased person (unless you are the executor of their estate, and even then, it would be in the name of "Estate of Bill Smith" not "Bill Smith") or a fictitious person (your dog).

This isn't news, though.  It is just filler for a slow news day.

In the NPR piece, the decedent was summoned for jury duty and he failed to respond, as he died in the interim.  Since the computers at the courthouse are not linked to Saint Peter's list, they kept spitting out summons, until the next-of-kin got a copy of the death certificate and sent it in.

Which is why, when someone dies, you need a lot of original copies of the death certificate (sealed copies, not photocopies).

But this is a news story?  I don't think so.   It is one of those supposedly "humorous" stories - and we are telegraphed this by cranking up the "Simper" control in Susan Stamberg's already simpering voice (which also has some sort of speech impediment - a prerequisite to be an announcer on NPR, it seems).

And as good little media drones, we are supposed to regale our friends about the story at the water cooler the next day in the cubicle hell we work in.  "Hey, didja hear about the guy summoned for jury duty?  He was DEAD!  Haw, Haw, Haw!  I'll have to try that excuse the next time I get a summons!  Haw, Haw, Haw!"

Sheesh!  This is why I don't work in cubicles anymore - that sort of crap is so predictable.  Your fellow drones show up for work and end up spending half the day in social grooming which consists of barfing up, word-for-word, what they saw on TeeVee last night.  It is like trading your life in for a bucket of crap.  And people buy it - by the bucketload.

The tag line of the story is, of course, "Want to avoid jury duty?  You could always die!  Haw, Haw, Haw!"

But of course, jury duty is ridiculously easy to avoid.  If you are not registered to vote, you will never be called.   And if you are called, you can "get out" of it in so many ways.  For example, if you have a job and have to support your family, they can't make you walk away from a $100,000 a year job for a month, and get paid $12 a day.

And if you are a Lawyer, in most States, they boot you off.  And the few States that allow Lawyers on a jury, chances are, both sides will move to strike you.  So Doctors, Lawyers, and anyone with even a halfway important job is booted off the jury half the time.  And who does that leave?  Housewives, retired people, people who have government jobs - talk about a skewed sample!

So what is the "story" here - it is supposed to be wry and humorous - a dead person being summoned for jury duty.    But that isn't funny, it is just what happens when people die - all the crap that is going on in your life keeps going.  And everyone doesn't automatically know you are dead and send flowers.

Maybe I am dense - or perhaps not dense enough.  But I don't get why this story was supposed to be funny, and why it was worthy of two minutes of airtime on a national radio news show.  Unless of course, they are aiming the news at the moron market.

But I thought NPR was supposed to be more intellectual than that.  But of course, what am I saying?  This is NPR!  These are the folks who fired Bob Edwards for being "too old" and gave us giggle-talkers Renee Montagne and Steve Inskeep in his place.  Tee-Hee!